This switch provides a rugged and secure switching infrastructure for harsh environments. It is suitable for industrial Ethernet applications, including factory automation, intelligent transportation systems (ITSs), substations, oil and gas installations, and other deployments in harsh environments.

You can connect this switch to office networking devices such as Cisco IP phones, Cisco Wireless Access Points, and other devices such as servers, routers, and other switches. In industrial environments, you can connect any Ethernet-enabled industrial communication device, including programmable logic controllers (PLCs), human-machine interfaces (HMIs), drives, sensors, video devices, traffic signal controllers, and intelligent electronic devices (IEDs).

This switch also has Power over Ethernet ports and is IP67 certified.

The switch is wall mounted and its components are designed to withstand extremes in temperature, vibration, and shock that are common in an industrial environment.

Most of the documentation related to this product can be found at http://www.cisco.com/en/US/products/ps12451/tsd_products_support_series_home.html

Table 1-1 lists and describes the switches and power supply. All IP67 switches use the LAN Base Cisco iOS firmware.

Front Panel of the Switch

This section describes the front panel components. The following figures depict the components available on the various models in this product family. Not all models are illustrated. 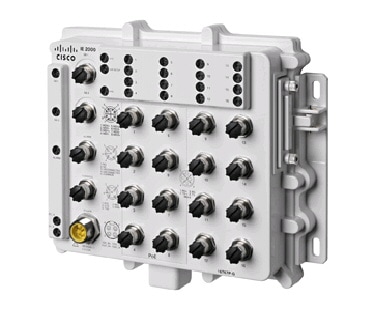 You can set the 10/100BASE-T downlink ports to operate at 10 or 100 Mb/s over IP standard M12 cabling. The ports can operate in full-duplex, half-duplex, autonegotiate (default), or never half-duplex mode.

A Never Half Duplex option for a port functions as the name implies, the link is never established at half duplex; it is either full-duplex or no link. Never Half Duplex avoids the unpredictable response times that in a CSMA/CD network can cause safety features to trip or interruptions that require restarting the process flow.

You can use the Device Manager or the sh power inline consumption default wattage command to change the configured power consumption values.

When the power requirement of a connected device is known and less than the maximum value for the class, the wattage can be set lower than the default IEEE classification. This setting overrides both the IEEE classification and power negotiation. For example, an IP phone that requires only 5 W but is in Class 0, which allows a maximum of 15.4 W. Configuring an override that reduces power on this port makes more power available to other ports. See the Cisco IE 2000 Switch Command Reference for more information. Class 0–3 is PoE. Class 4 is PoE+:

You connect the DC power to the switch through the front panel connector. The power connector labeling is on the panel. Torque power connection to 10in/lbs.

Additional information regarding the power levels is available in the Power-over-Ethernet section of this chapter. 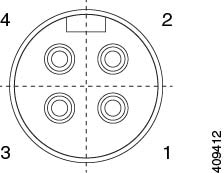 You connect the alarm signals to the switch through the alarm connector. The switch supports one alarm output relay.

You can connect the switch to a PC running Microsoft Windows or to a terminal server through the 5-pole A-coded console port and configure it by using the CLI. The baud rate and format of the console port is:

You can use the LEDs to monitor overall system status and power supply input and output status as well as port and alarm status.

The Express Setup LED displays the status of the initial setup for the initial configuration.

The PoE LED indicates the status of the PoE ports.

The System LED shows whether the device is receiving power and is functioning properly.

Table 1-6 list the alarm LED colors and their meanings.

For information about the power LED colors and behaviors during the boot fast sequence, see the “LEDs” section.

The rear panels of the switch and the IP67 power supply have 4 mounting ears for installation on wall.