This chapter describes how to configure VLANs on the Catalyst 6500 series switches.

For complete syntax and usage information for the commands used in this chapter, refer to the Catalyst Supervisor Engine 32 PISA Cisco IOS Command Reference, Release 12.2ZY, at this URL:

A VLAN is a group of end stations with a common set of requirements, independent of physical location. VLANs have the same attributes as a physical LAN but allow you to group end stations even if they are not located physically on the same LAN segment.

VLANs are usually associated with IP subnetworks. For example, all the end stations in a particular IP subnet belong to the same VLAN. Traffic between VLANs must be routed. LAN port VLAN membership is assigned manually on an port-by-port basis.

You must enable the extended system ID to use 4096 VLANs (see the "Understanding the Bridge ID" section).

Layer 3 LAN ports, WAN interfaces and subinterfaces, and some software features use internal VLANs in the extended range. You cannot use an extended range VLAN that has been allocated for internal use.

You must enable the extended system ID to use extended range VLANs (see the "Understanding the Bridge ID" section).

Except for the VLAN name, Ethernet VLANs 1006 through 4094 use only default values.

You can configure the VLAN name for Ethernet VLANs 1006 through 4094.

You can configure the following parameters for VLANs 2 through 1001: 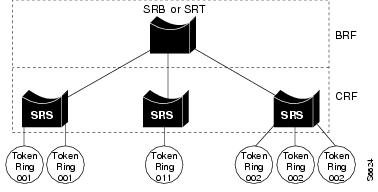 For source routing, the Catalyst 6500 series switch appears as a single bridge between the logical rings. The TrBRF can function as a source-route bridge (SRB) or a source-route transparent (SRT) bridge running either the IBM or IEEE STP. If an SRB is used, you can define duplicate MAC addresses on different logical rings.

The Token Ring software runs an instance of STP for each TrBRF VLAN and each TrCRF VLAN. For TrCRF VLANs, STP removes loops in the logical ring. For TrBRF VLANs, STP interacts with external bridges to remove loops from the bridge topology, similar to STP operation on Ethernet VLANs.

Certain parent TrBRF STP and TrCRF bridge mode configurations can place the logical ports (the connection between the TrBRF and the TrCRF) of the TrBRF in a blocked state. For more information, see the "VLAN Configuration Guidelines and Restrictions" section.

To accommodate IBM System Network Architecture (SNA) traffic, you can use a combination of SRT and SRB modes. In a mixed mode, the TrBRF determines that some ports (logical ports connected to TrCRFs) operate in SRB mode while other ports operate in SRT mode

To pass data between rings located on separate network devices, you can associate the rings to the same TrBRF and configure the TrBRF for an SRB.

Within a TrCRF, source-route switching forwards frames based on either MAC addresses or route descriptors. The entire VLAN can operate as a single ring, with frames switched between ports within a single TrCRF. 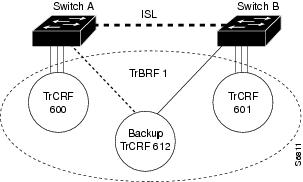 Tables 12-2 through 12-6 show the default configurations for the different VLAN media types.

When creating and modifying VLANs in your network, follow these guidelines and restrictions:

Supervisor engine redundancy does not support nondefault VLAN data file names or locations. Do not enter the vtp file file_name command on a switch that has a redundant supervisor engine.

Before installing a redundant supervisor engine, enter the no vtp file command to return to the default configuration.

Before you can create a VLAN, the Catalyst 6500 series switch must be in VTP server mode or VTP transparent mode. For information on configuring VTP, see Chapter 11 "Configuring VTP."

The VLAN configuration is stored in the vlan.dat file, which is stored in nonvolatile memory. You can cause inconsistency in the VLAN database if you manually delete the vlan.dat file. If you want to modify the VLAN configuration or VTP, use the commands described in this guide and in the Catalyst Supervisor Engine 32 PISA Cisco IOS Command Reference, Release 12.2ZY, publication.

To do a complete backup of your configuration, include the vlan.dat file in the backup.

The Cisco IOS end command is not supported in VLAN database mode.

Catalyst 6500 series switches do not support Token Ring or FDDI media. The switch does not forward FDDI, FDDI-Net, TrCRF, or TrBRF traffic, but it can propagate the VLAN configuration through VTP.

When a Catalyst 6500 series switch is configured as a VTP server, you can configure FDDI and Token Ring VLANs from the switch.

You must configure a TrBRF before you configure the TrCRF (the parent TrBRF VLAN you specify must exist).

In a Token Ring environment, the logical interfaces (the connection between the TrBRF and the TrCRF) of the TrBRF are placed in a blocked state if either of these conditions exists:

The TrBRF is running the IBM STP, and the TrCRF is in SRT mode.

The TrBRF is running the IEEE STP, and the TrCRF is in SRB mode.

These sections describe how to configure VLANs:

Assigning a Layer 2 LAN Interface to a VLAN

VLANs support a number of parameters that are not discussed in detail in this section. For complete information, refer to the Catalyst Supervisor Engine 32 PISA Cisco IOS Command Reference, Release 12.2ZY, publication.

When the switch boots, if the VTP domain name and VTP mode in the startup-config and vlan.dat files do not match, the switch uses the configuration in the vlan.dat file.

You use the interface configuration command mode to define the port membership mode and add and remove ports from a VLAN. The results of these commands are written to the running-config file, and you can display the file by entering the show running-config command.

See the "VLAN Default Configuration" section for the list of default parameters that are assigned when you create a VLAN. If you do not specify the VLAN type with the media keyword, the VLAN is an Ethernet VLAN.

To create or modify a VLAN, perform this task:

When you create or modify an Ethernet VLAN, note the following information:

Because Layer 3 ports and some software features require internal VLANs allocated from 1006 and up, configure extended-range VLANs starting with 4094.

You cannot delete the default VLANs for the different media types: Ethernet VLAN 1 and FDDI or Token Ring VLANs 1002 to 1005.

When you delete a VLAN, any LAN ports configured as access ports assigned to that VLAN become inactive. The ports remain associated with the VLAN (and inactive) until you assign them to a new VLAN.

This example shows how to create an Ethernet VLAN in VLAN database mode:

Assigning a Layer 2 LAN Interface to a VLAN

A VLAN created in a management domain remains unused until you assign one or more LAN ports to the VLAN.

Make sure you assign LAN ports to a VLAN of the appropriate type. Assign Ethernet ports to Ethernet-type VLANs.

To assign one or more LAN ports to a VLAN, complete the procedures in the "Configuring LAN Interfaces for Layer 2 Switching" section.

The internal VLAN allocation policy is applied only following a reload.

To configure the internal VLAN allocation policy, perform this task:

When you configure the internal VLAN allocation policy, note the following information:

Enter the ascending keyword to allocate internal VLANs from 1006 and up.

Enter the descending keyword to allocate internal VLAN from 4094 and down.

This example shows how to configure descending as the internal VLAN allocation policy:

On trunk ports, you can translate one VLAN number to another VLAN number, which transfers all traffic received in one VLAN to the other VLAN.

Enabling VLAN Translation on Other Ports in a Port Group

To avoid spanning tree loops, be careful not to misconfigure the VLAN translation feature.

A VLAN translation configuration is inactive if it is applied to ports that are not Layer 2 trunks.

Do not remove the VLAN to which you are translating from the trunk.

The modules that support VLAN translation

The port groups to which VLAN translation configuration applies

The number of VLAN translations supported by the port groups

The trunk types supported by the modules

To configure a port as a trunk, see the "Configuring a Layer 2 Switching Port as a Trunk" section.

To translate VLANs on a trunk port, perform this task:

Enabling VLAN Translation on Other Ports in a Port Group

To enable VLAN translation on other ports in a port group, perform this task:

This example shows how to enable VLAN translation on a port:

These restrictions apply when mapping 802.1Q VLANs to ISL VLANs:

You can configure up to eight 802.1Q-to-ISL VLAN mappings on the Catalyst 6500 series switch.

You can only map 802.1Q VLANs to Ethernet-type ISL VLANs.

Do not enter the native VLAN of any 802.1Q trunk in the mapping table.

VLAN mappings are local to each Catalyst 6500 series switch. Make sure you configure the same VLAN mappings on all appropriate network devices.