Your software release might not support all the features documented in this module. For the latest caveats and feature information, see the Bug Search Tool at https://tools.cisco.com/bugsearch/ and the release notes for your software release. To find information about the features documented in this module, and to see a list of the releases in which each feature is supported, see the “New and Changed Information” chapter or the Feature History table below.

Load balancing distributes traffic so that no individual router is overburdened. In an MPLS Layer 3 network, you can achieve load balancing by using the Border Gateway Protocol (BGP). When multiple iBGP paths are installed in a routing table, a route reflector advertises only one path (next hop). If a router is behind a route reflector, all routes that are connected to multihomed sites are not advertised unless a different route distinguisher is configured for each virtual routing and forwarding instance (VRF). (A route reflector passes learned routes to neighbors so that all iBGP peers do not need to be fully meshed.)

When a router learns two identical eBGP paths for a prefix from a neighboring autonomous system, it chooses the path with the lower route ID as the best path. The router installs this best path in the IP routing table. You can enable eBGP load balancing to install multiple paths in the IP routing table when the eBGP paths are learned from a neighboring autonomous system instead of picking one best path.

During packet switching, depending on the switching mode, the router performs either per-packet or per-destination load balancing among the multiple paths.

Layer 3 VPN load balancing for both eBGP and iBGP allows you to configure multihomed autonomous systems and provider edge (PE) routers to distribute traffic across both external BGP (eBGP) and iBGP multipaths.

Layer 3 VPNs load balance on a per-packet or per-source or destination pair basis. To enable load balancing, configure the router with Layer 3 VPNs that contain VPN routing and forwarding instances (VRFs) that import both eBGP and iBGP paths. You can configure the number of paths separately for each VRF. 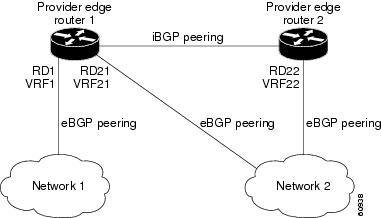 You can configure PE1 so that it can select both iBGP and eBGP paths as multipaths and import these paths into the VPN routing and forwarding instance (VRF) of Network 1 to perform load balancing.

Traffic is distributed as follows:

Any prefix that is advertised from Network 2 will be received by PE1 through route distinguisher (RD) 21 and RD22.

The router can select both paths as multipaths for VRF1 and insert these paths into the VRF1 RIB.

The route reflectors do not need to be in the forwarding path, but you must configure unique route distinguisher (RDs) for VPN sites that are multihomed.

Figure 22-2 shows a topology that contains three PE routers and a route reflector, all configured for iBGP peering. PE2 and PE3 each advertise an equal preference eBGP path to PE1. By default, the route reflector chooses only one path and advertises PE1.

Figure 22-2 Topology with a Route Reflector 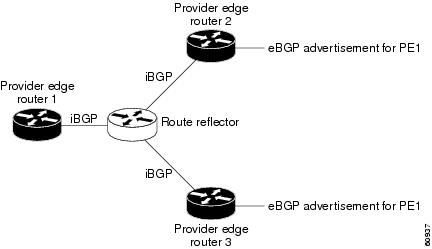 Load balancing is not supported at the ingress PE for Layer 2 VPNs.

Starting from Cisco NX-OS Release 8.0(1), use the BGP VPNv4 Multipath feature to achieve Equal Cost Multi-Path (ECMP) for traffic flowing from an Autonomous System Border Router (ASBR) towards the Provider Edge (PE) device in an Multi-Protocol Label Switching (MPLS) cloud network by using a lower number of prefixes and MPLS labels. This feature configures the maximum number of multipaths for both eBGP and iBGP paths. This feature can be configured on PE devices and Route Reflectors in an MPLS topology.

Consider a scenario in which a dual homed Customer Edge (CE) device is connected to 2 PE devices and you have to utilize both the PE devices for traffic flow from ASBR-2 to the CE device.

Currently, as shown in Figure 22-3, Virtual Routing and Forwarding (VRF) on each PE is configured using separate Route Distinguishers (RD). The CE device generates a BGP IPv4 prefix. The PE devices are configured with 2 separate RDs and generate two different VPN-IPv4 prefixes for the BGP IPv4 prefix sent by the CE device. ASBR-1 receives both the VPN-IPv4 prefixes and adds them to the routing table. ASBR-1 allocates Inter-AS option-B labels, Inlabel L1 and Inlabel L2, to both the VPN routes and then advertises both VPN routes to ASBR-2. To use both PE devices to maintain traffic flow, ASBR-1 has to utilize two Inter-AS option-B labels and two prefixes which limits the scale that can be supported.

Using the BGP VPN Multipath feature, as shown in Figure 22-4, you can enable the VRF on both PE devices to use the same RD. In such a scenario, ASBR-1 receives the same prefix from both the PE devices. ASBR-1 allocates only one Inter-AS option-B label, Inlabel L1, to the received prefix and advertises the VPN route to ASBR-2. In this case, the scale is enhanced as traffic flow using both PE devices is established with only one prefix and label on ASBR-1.

BGP uses the best path selection process to determine which path is the best where multiple paths to the same destination are available. You can assign a preference to a specific path when multiple equal cost paths are available.

Since the administrative distance of iBGP is worse than the distance of most Interior Gateway Protocols (IGPs), the unicast Routing Information Base (RIB) may apply the same BGP cost community compare algorithm before using the normal distance or metric comparisons of the protocol or route. VPN routes that are learned through iBGP can be preferred over locally learned IGP routes.

The pre-best path point of insertion (POI) in the BGP cost community supports mixed EIGRP Layer 3 VPN network topologies that contain VPN and back-door links. This POI is applied automatically to EIGRP routes that are redistributed into BGP. The pre-best path POI carries the EIGRP route type and metric. This POI influences the best-path calculation process by influencing BGP to consider this POI before any other comparison step.

You can configure BGP path selection to ignore the cost community but this is not recommended for configuration with a back-door link.

You can configure a Layer 3 VPN load balancing for an eBGP or iBGP network.

You can configure the BGP cost community for routes in a Layer 3 VPN.

For detailed information about the fields in the output from these commands, see the Cisco NX-OS MPLS Command Reference.

The following example shows how to configure iBGP load balancing:

The following example shows how to configure a maximum of 3 BGP VPNv4 multipaths:

The following example shows how to configure the BGP cost community:

Table 22-2 lists the release history for this feature.