The FEX has two types of interfaces:

HIF interfaces are always configured as an edge port with Bridge Protocol Data Unit (BPDU) Guard enabled. The BPDU Guard detects loops within a network by sending BPDU messages to the port and putting the port into an error-disabled state. When an HIF experiences a linkup, the BPDU Guard sends out ten BPDUs to prevent any loops within the Layer 2 domain. A BPDU filter is then enabled on the interface and no additional BPDUs are sent out. 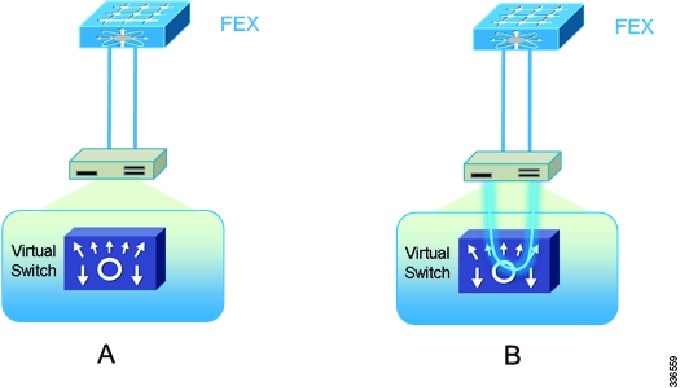 By default, Cisco NX-OS takes no corrective action when the traffic exceeds the configured level.

This feature is not supported in the FEX architecture with the Cisco Nexus 5000 switch.

Network interfaces (NIFs) are the uplinks interfaces on the FEX. The parent switch initiates an NIF traffic storm by monitoring the ingress traffic on the fabric ports. You can use these two methods to connect the FEX to the parent switch:

This example shows to configure a static pinning fabric interface connection to a switch:

This example shows how to configure an EtherChannel Fabric Interface connection to a switch: