Additional information about VSAN trunking is covered in the following topics:

If you misconfigure VSAN configurations across E ports, issues can occur such as the merging of traffic in two VSANs (causing both VSANs to mismatch). The VSAN trunking protocol validates the VSAN interfaces at both ends of an ISL to avoid merging VSANs (see Figure 1-2).

The trunking protocol cannot detect merging of VSANs when a third-party switch is placed in between two Cisco Nexus 5000 Series switches (see Figure 1-3).

This section explains how to configure VSAN trunking and includes the following topics:

The preferred configuration on the Cisco Nexus 5000 Series switches is that one side of the trunk is set to auto and the other is set to on.

When connected to a third-party switch, the trunk mode configuration has no effect. The ISL is always in a trunking disabled state. 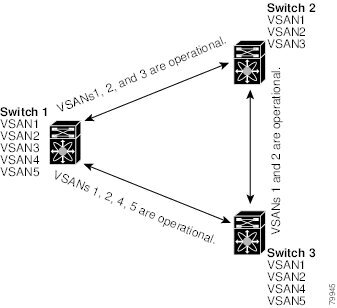 Using Figure 1-4 as an example, you can configure the list of allowed VSANs on a per-interface basis (see Figure 1-5). For example, if VSANs 2 and 4 are removed from the allowed VSAN list of ISLs connecting to switch 1, the operational allowed list of VSANs for each ISL would be as follows: 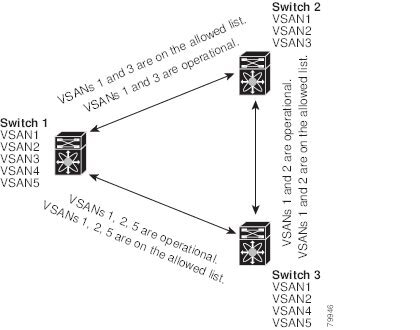 The show interface command is invoked from the EXEC mode and displays VSAN trunking configurations for a TE port. Without any arguments, this command displays the information for all of the configured interfaces in the switch.

The following example shows how to display the trunk mode of a Fibre Channel interface:

The following example shows how to display the trunk protocol of a Fibre Channel interface:

The following example shows how to display the VSAN information for all trunk interfaces: