IGMP snooping is supported on all Ethernet interfaces. The term snooping is used because Layer 3 control plane packets are intercepted and influence Layer 2 forwarding decisions. 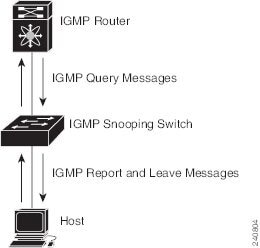 Cisco NX-OS ignores the configuration of last member query interval when you enable the fast leave feature because it does not check for remaining hosts.

The IGMPv3 snooping implementation on the switch forwards IGMPv3 reports to allow the upstream multicast router do source-based filtering.

By default, the software tracks hosts on each VLAN port. The explicit tracking feature provides a fast leave mechanism. Because every IGMPv3 host sends membership reports, a report suppression feature limits the amount of traffic the switch sends to other multicast capable routers. When report suppression is enabled, and no IGMPv1 or IGMPv2 hosts requested the same group, the software provides proxy reporting. The proxy feature builds group state from membership reports from the downstream hosts and generates membership reports in response to queries from upstream queriers.

When there is no multicast router in the VLAN to originate the queries, you must configure an IGMP snooping querier to send membership queries.

The control plane of the Cisco Nexus 5000 Series switch is able to detect IP addresses but forwarding occurs using the MAC address only.

When hosts want to leave a multicast group, they can either silently leave, or they can send a leave message. When the switch receives a leave message from a host, it sends a group-specific query to determine if any other devices connected to that interface are interested in traffic for the specific multicast group. The switch then updates the forwarding table for that MAC group so that only those hosts interested in receiving multicast traffic for the group are listed in the forwarding table. If the router receives no reports from a VLAN, it removes the group for the VLAN from its IGMP cache.

The following example shows disabling IGMP snooping for VLAN 5 only:

To verify the IGMP snooping configuration, perform one of these tasks:

The following example shows how to verify the IGMP snooping parameters: