This chapter describes the Cisco Nexus 5000 Series switches and includes the following sections:

Fibre Channel over Ethernet (FCoE) provides a method of encapsulating Fibre Channel traffic over a physical Ethernet link. FCoE frames use a unique Ethertype so that FCoE traffic and standard Ethernet traffic can be carried on the same link.

FCoE enables an evolutionary approach to I/O consolidation. The upper Fibre Channel layers are unchanged, so the Fibre Channel operational model is maintained. FCoE network management and configuration is similar to a native Fibre Channel network.

Cisco Nexus 5000 Series switches use FCoE to carry Fibre Channel and Ethernet traffic on the same physical Ethernet connection between the switch and the server. At the server, the connection terminates to a converged network adapter (CNA). The adapter presents two interfaces to the server’s operating system (OS): one Ethernet NIC interface and one Fibre Channel HBA interface. The server OS is not aware of the FCoE encapsulation (See Figure 1-1)

Cisco Nexus 5000 Series switches provide quality of service (QoS) capabilities to ensure lossless service across the switch for Fibre Channel traffic. Best-effort service can be applied to all of the Ethernet traffic or specific classes of Ethernet traffic can be configured with different QoS levels. 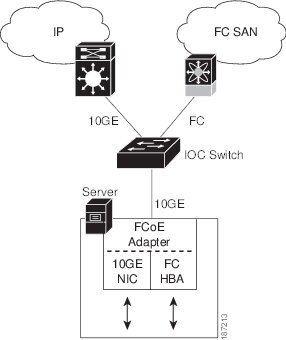 All of the 10-Gigabit Ethernet ports support FCoE. Each port can be used as a downlink (connected to a server) or as an uplink (to the data center LAN).

Each Fibre Channel port can be used as a downlink (connected to a server) or as an uplink (to the data center SAN fabric).

Cisco Nexus 5000 Series switches are shipped with the licenses installed. The switch provides commands to manage the licenses and install additional licenses.

Ethanalyzer is a Cisco NX-OS protocol analyzer tool based on the Wireshark (formerly Ethereal) open source code. Ethanalyzer is a command-line version of Wireshark for capturing and decoding packets. You can use Ethanalyzer to troubleshoot your network and analyze the control-plane traffic. For more information about Ethanalyzer, see the “Using Ethanalyzer” section.

You can configure Cisco Nexus 5000 Series switches using the command line interface (CLI), the XML management interface over SSH, or SNMP as follows:

In this release, the Cisco Nexus 5000 Series switch is typically deployed in the following topologies:

The Cisco Nexus 5000 Series switch can be deployed as a 10-Gigabit Ethernet top-of-rack (TOR) switch, with uplinks to the data center LAN distribution layer switches. An example configuration in shown in Figure 1-2. 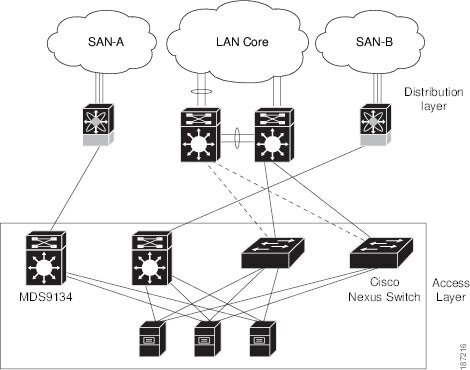 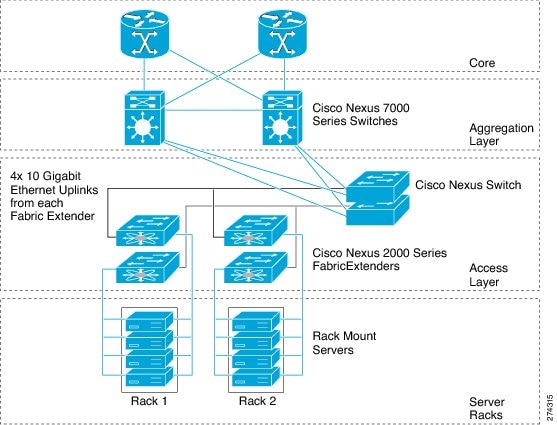 On the Cisco Nexus 5000 Series switch, the Ethernet network-facing ports are connected to two Catalyst 6500 switches. Depending on required uplink traffic volume, there may be multiple ports connected to each Catalyst 6500 switch, configured as port channels. If STP is enabled in the data center LAN, the links to one of the switches will be STP active and the links to the other switch will be STP blocked.