The Fabric Configuration Server (FCS) provides discovery of topology attributes and maintains a repository of configuration information of fabric elements. A management application is usually connected to the FCS on the switch through an N port. The FCS views the entire fabric based on the following objects:

Each object has its own set of attributes and values. A null value may also be defined for some attributes.

In the Cisco Nexus 5000 Series switch environment, a fabric may consist of multiple VSANs. One instance of the FCS is present per VSAN.

FCS supports the discovery of virtual devices. The fcs virtual-device-add command, entered in FCS configuration submode, allows you to discover virtual devices in a particular VSAN or in all VSANs.

If you have attached a management application to a switch, all the frames directed towards the FCS in the switch are part of the port VSAN in the switch port (F port). Your view of the management application is limited only to this VSAN. However, information about other VSANs that this switch is part of can be obtained either through the SNMP or CLI.

Figure 1-1 FCSs in a VSAN Environment 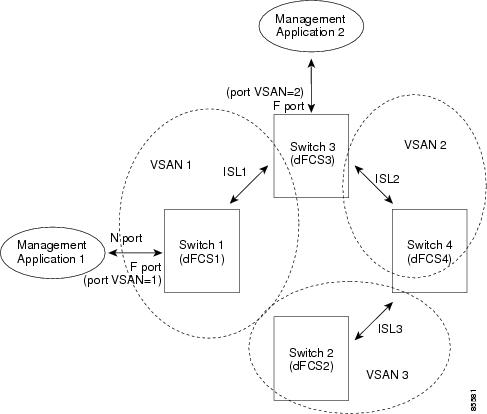 FCSs have the following characteristics:

SNMP manager can use the FCS management information base (MIB) to start discovery and obtain information about the fabric topology.

You can specify if the unique name verification is for the entire fabric (globally) or only for locally (default) registered platforms.

Set this command globally only if every switch in the fabric belong to the Cisco MDS 9000 Family or Cisco Nexus 5000 Series of switches.

To enable global checking of the platform name, perform this task:

You can use the show fcs commands to display the status of the WWN configuration.

The following example shows how to display the FCS local database:

The following example shows how to display a list of all interconnect elements for VSAN 1:

The following example shows how to display information for a specific platform:

The following example shows how to display port information for a specific pWWN: