When a lighting solution needs to deploy in a small store/site where 20 or fewer number of light fixtures are required to be installed, a Cisco Catalyst 3850 standalone switch is sufficient, along with SCM, for the lighting network for provisioning light fixtures. In this small scale deployment, a Syslog server can also be connected to the same Cisco Catalyst 3850 switch to manage this small lighting network.

This chapter, which covers the implementation of networking Layer 2, Layer 3, and security features required for a small scale network powered lighting deployment as specified in the Design Guide, includes the following major topics:

In this deployment, one standalone Cisco Catalyst 3850 UPOE is sufficient to implement lighting in a small scale (for example, up to 20 lights in a small retail store) as shown in Figure 6-1. 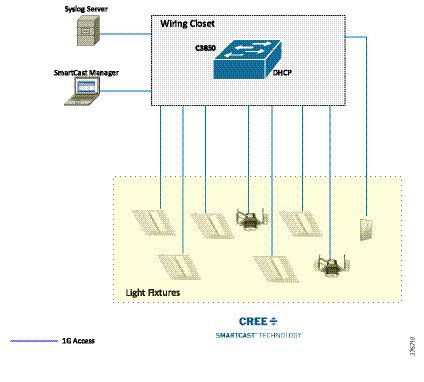 When migrating the initial lighting setup to a small scale deployment, the DHCP server IP addressing pool for light fixtures and wall dimmers is configured on the Cisco Catalyst 3850 switch itself to assign IP addresses to Cree endpoints.

Step 1 Follow Configuring Network Layer 2 and Layer 3 from Steps 1 to 4 in the Wiring Closet Access Switch configuration section in Chapter 4.

The configuration of wiring closet access switch in this deployment for UPOE features, security and logging is same as described in Wiring Closet Access Switch (Cisco Catalyst 3850 Stack).

The light fixtures provisioning steps in this deployment are same as described in Provisioning Light Fixtures (SmartCast Manager), where you can refer to when migrating the lighting initial setup to deployment as shown in Figure 6-1.