This chapter, which covers the implementation details for migrating the lighting network to a Production Network without a Campus Network core architecture as described in Section 3.1, System Topologies of the Cisco Digital Building Cree Design Guide, includes the following major topics:

In this deployment, access switches are directly connected to data center via firewall as shown in Figure 5-1. 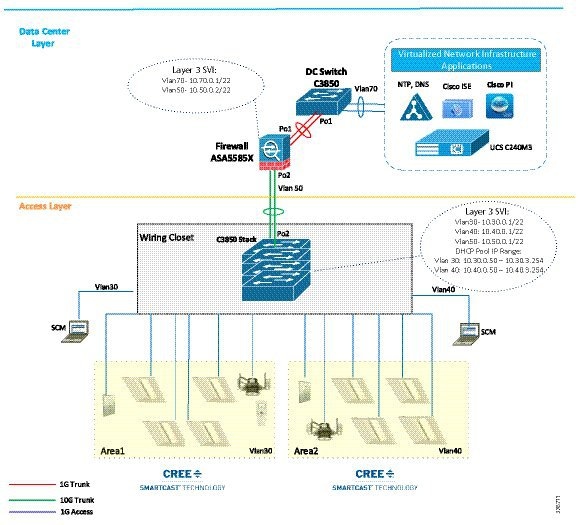 When migrating from initial lighting setup to a Production Network without network core, wiring closet switches (for example, Cisco Catalyst 3850 stack) are connected directly to the data center edge via the firewall in order to leverage data center application services for lighting network as discussed in Section 3.1, System Topologies of the Cisco Digital Building Cree Design Guide.

This section covers configuration required on Cisco Catalyst 3850 stack and ASA while connecting the switch stack to the firewall. The implementation of all other applications and devices is similar, as discussed in Chapter4, “Lighting Migration to Campus Network Architecture”

During migration, the DHCP server IP addressing pool for light fixtures/wall dimmers is configured on the Cisco Catalyst 3850 switch stack to assign IP addresses to Cree endpoints, as shown in Figure 5-1.

Do the following to configure DHCP server pool on Cisco Catalyst 3850 stack for lighting network:

In this deployment, follow the steps below to configure networking port channel on 3850 stack to connect the Cisco Catalyst 3850 switch stack to the ASA firewall, as shown in Figure 5-1.

Step 2 Configure the Port Channel as a trunk port:

Step 1 Connect the SCM to an access port on the switch, in the same VLAN as the lighting network.

Step 3 In the Network Interface selection, if prompted to select the network interface, choose the PoE network.

Step 5 If light fixtures are commissioned already from the initial installation, do a factory reset on them, and then allow them to be rediscovered for commissioning on a new area as per the requirement.

Step 6 Once the devices are listed on the SCM, perform OneButton Setup.

Step 8 Once OneButton Setup is complete, click All Devices under the Settings tab to verify that all devices in the lighting network are assigned to Occupancy Groups and Switch Groups.

Step 9 Click Controls and change the dim level to verify that the Switch Group brightness changes when controlling it via the control screen. This verifies light fixture is provisioned and controllable by SCM.

In this deployment, follow the steps below to configure firewall networking to connect the Cisco Catalyst 3850 switch stack as shown in Figure 5-1. The configuration of the firewall is same as described in Configuring Firewall in this deployment.