When planning your rack installation, consider the following guidelines:

In addition to the preceding guidelines, review the precautions for avoiding excessive temperature conditions in the "Electrical Safety" section.

The chassis should already be in the area where you will install it. When installing the Cisco ASR 1009-X Router and Cisco ASR 1006-X Router, consider the following items:

The parts and tools required for installing the rack-mount brackets and cable-management brackets are listed in the Tools and Equipment section.

If you are rack-mounting the chassis using the rear rack-mount brackets, then this type of installation provides for the chassis being recessed in the rack.

Before you install the chassis, measure the space between the vertical mounting flanges (rails) on your equipment rack to verify that the rack conforms to the measurements shown in the following table.

You can perform one of the following procedures to install the chassis in a rack:

Determine where in the rack you want the chassis to be mounted. If you are mounting more than one chassis in the rack, then start from the bottom up or the center of the rack. The figure that follows shows the brackets attached to the chassis. Depending on the bracket holes you use, the chassis may protrude in the rack. 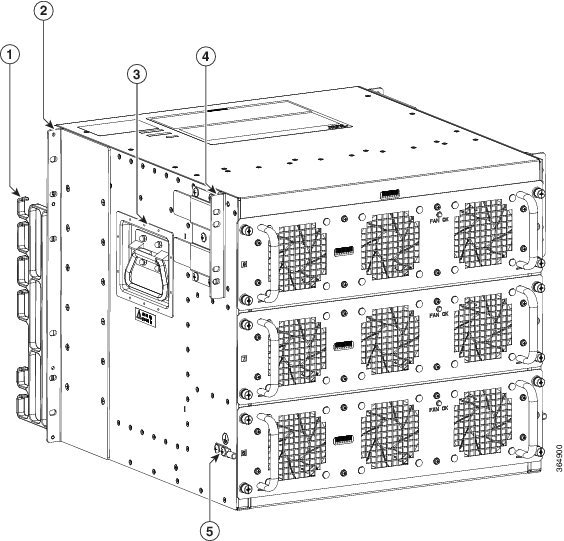 We recommend that you allow at least 1 or 2 inches (2.54 or 5.08 cm) of vertical clearance between the router and any equipment directly above and below it.

To install the chassis in the rack using the forward rack-mount brackets, perform the following steps:

To install the chassis in the rack using the rear rack-mount brackets, perform the following steps:

To install the Cisco ASR 1009-X Router or Cisco ASR 1006-X Router on a two-post equipment rack, with the forward rack-mount brackets, follow these steps:

This completes the procedure for installing the chassis on a two-post rack. Proceed to the Attaching the Ground Connection section to continue the installation. 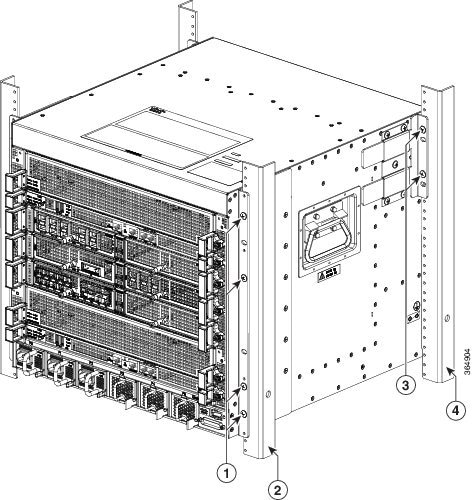 This completes the procedure for installing the chassis in the rack. Proceed to the Attaching the Cable-Management Bracket section to continue the installation.

Follow these steps to attach two cable-management brackets to each side of the Cisco ASR 1009-X Router and Cisco ASR 1006-X Router in the rack:

Have the recommended tools and supplies available before you begin this procedure.

The following tools, equipment, and supplies necessary to connect the system ground to the chassis:

Use the following procedure to attach the grounding lug to the chassis ground connector on your chassis:

This completes the procedure for attaching a chassis ground connection. Go to the following cabling sections for information on attaching cables.

However, when the Fast Ethernet Management port is configured to a fixed speed (10 or 100 Mbps) through command-line interface (CLI) commands, the port is forced to MDI mode.

When in a fixed-speed configuration and MDI mode:

Follow these steps to connect an AC-input power supply to the Cisco ASR 1009-X Router and Cisco ASR 1006-X Router:

Each DC input power cable is terminated at the PDU by a cable lug. For more details, see the following figure.

To connect the DC power supply, follow these steps:

A crossover cable reverses pin connections from one end to the other. In other words, it connects pin 1 (at one end) to pin 8 (at the other end), pin 2 to pin 7, pin 3 to pin 6, and so on. You can identify a crossover cable by comparing the two modular ends of the cable. Hold the cable ends in your hand, side-by-side, with the tabs at the back. Ensure that the wire connected to the outside (left) pin of the left plug (pin 1) is the same color as the wire connected to the outside (right) pin of the right plug (pin 8).

Use the following procedure to connect a video terminal to the console port on a route processor.

Users using the console port to access the router are automatically directed to the IOS command-line interface, by default.

If a user is trying to access the router through the console port and sends a break signal (a break signal can be sent by entering Ctrl-C or Ctrl-Shift-6, or by entering the send break command at the Telnet prompt) before connecting to the IOS command-line interface, the user is directed into diagnostic mode by default if the non-RPIOS sub-packages can be accessed.