Unless otherwise specified, "ONS 15454" refers to both ANSI and ETSI shelf assemblies.

The Cisco Transport Controller (CTC) ID is provided with the ONS 15454 system, but the system does not display the user ID when you sign into CTC. This ID can be used to set up other ONS 15454 users.

You can have up to 500 user IDs on one ONS 15454. Each CTC or TL1 user can be assigned one of the following security levels:

Retrieve—Users can retrieve and view CTC information but cannot set or modify parameters.

By default, multiple concurrent user ID sessions are permitted on the node, that is, multiple users can log into a node using the same user ID. However, you can provision the node to allow only a single login per user and prevent concurrent logins for all users.

You must add the same user name and password to each node the user accesses.

Table 18-1 shows the actions that each user privilege level can perform in node view.


Table 18-2 shows the actions that each user privilege level can perform in network view.

Each ONS 15454 CTC or TL1 user can be idle during his or her login session for a specified amount of time before the CTC window is locked. The lockouts prevent unauthorized users from making changes. Higher-level users have shorter default idle periods and lower-level users have longer or unlimited default idle periods, as shown in Table 18-3. The user idle period can be modified by a Superuser; refer to the "G88 Modify Users and Change Security" procedure.

Superusers can view real-time lists of users who are logged into CTC or TL1 user logins by node. Superusers can also provision the following password, login, and node access policies:

Password expirations and reuse—Superusers can specify when users must change their passwords and when they can reuse them.

Login attempts—Superusers can specify the maximum number of times a user is allowed to attempt to login to CTC.

Node access and user sessions—Superusers can limit the number of CTC sessions one user can have, and they can prohibit access to the ONS 15454 using the LAN or TCC2 RJ-45 connections.

In addition, a Superuser can select secure shell (SSH) instead of Telnet at the CTC Provisioning > Security > Access tabs. SSH is a terminal-remote host Internet protocol that uses encrypted links. It provides authentication and secure communication over unsecure channels. Port 22 is the default port and cannot be changed.

Audit trails prove useful for maintaining security, recovering lost transactions, and enforcing accountability. Accountability refers to tracing user activities; that is, associating a process or action with a specific user.

The ONS 15454 maintains a 640-entry, human-readable audit trail of user or system actions such as login, logout, circuit creation or deletion, and user- or system-generated actions. Login events include authorized Cisco logins using the ONS 15454 command line interface (CLI) or CTC, the ONS 15454 graphical user interface. You can move the log to a local or network drive for later review. The ONS 15454 generates an event to indicate when the log is 80 percent full, and another event to indicate that the oldest log entries are being overwritten.

SONET timing parameters must be set for each ONS 15454. Each ONS 15454 independently accepts its timing reference from one of three sources:

An OC-N/STM-N card installed in the ONS 15454. The card is connected to a node that receives timing through a BITS source.

The internal ST3 clock on the TCC2 card.

The other nodes are set to line. The line nodes derive timing from the externally timed node through the OC-N trunk (span) cards. The MSTP normally derives timing from the line using the OSCM or OSC-CSM card that are inside an OC-3/STM-1 channel.

Figure 18-1 shows an ONS 15454 network timing setup example. Node 1 is set to external timing. Two timing references are set to BITS. These are Stratum 1 timing sources wired to the BITS input pins on the Node 1 backplane. The third reference is set to internal clock. The BITS output pins on the backplane of Node 3 are used to provide timing to outside equipment, such as a digital access line access multiplexer. 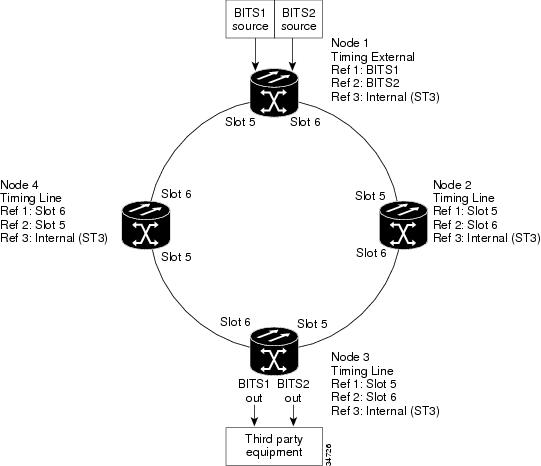 Synchronization status messaging (SSM) is a SONET protocol that communicates information about the quality of the timing source. SSM messages are carried on the S1 byte of the SONET Line layer. They enable SONET devices to automatically select the highest quality timing reference and to avoid timing loops.