After performing a Simulation Analysis across multiple failure sets, you can fine-tune the analysis for a subset of failure scenarios and a subset of service classes without running a new analysis. For example, if you run a simulation for nodes, circuits, and ports, you can later go back and view the results for any one of those three objects. See View Simulation Analysis on a Subset of Failure Scenarios or Service Classes.

Upon finishing the analysis, WAE Design switches to the Worst-Case Traffic view and updates the plot to simultaneously display all worst-case failures (Figure 6-1). It also updates the following columns in the Interfaces and Circuits tables.

If you record failures causing utilizations within a given percent of worst case, this column shows QoS violations as a percent. (See Worst-Case QoS Violations.) If the number is positive, then the allotted capacity has been surpassed. If negative, the capacity has not been surpassed. For example, if a circuit has 10,000 Mbps capacity, and if the amount of traffic on it as a result of three different failures is 11,000, 8,000, and 4,000 Mbps, the utilizations are 10%, -20%, and -60%, respectively and in descending order.

For information on reading notation of objects within tables, see the WAE Design Integration and Development Guide.

For information on worst-case calculations for VPNs, see the VPN Simulation chapter.

WAE Design includes QoS bound (maximum available capacity) as part of the worst-case calculations. If there are no QoS parameters set, then the QoS bound is 100% and violations occur if utilization goes over that 100%. However, if a worst-case policy has been set on a service class or if interface queue parameters have been set, then worst-case QoS violations are calculated. In these instances, WAE Design identifies the interface with the highest percentage of QoS violation as the worst-case possibility (Figure 6-2). The following columns are updated accordingly.

If you select an interface, you are actually failing its associated circuit to its worst-case.

Figure 6-3 Failure of Single Circuit to Its Worst-Case

When running a Simulation Analysis, you have the option to simulate worst-case latency for each demand in the plan. WAE Design calculates the maximum latency of each demand under the failure scenarios selected. The result does not depend on service classes or traffic levels since demand routing is independent of these plans. The simulation also records the failures that cause this maximum latency.

The following columns in the Demands table are updated when the “Calculate demand worst-case latency” option is selected for Simulation Analysis tool.

For information on worst-case latency calculations for VPNs, see the VPN Simulation chapter.

After running Simulation Analysis to calculate demand worst-case latency, you have the option to fail a single demand to its worst-case latency. Simply right-click the demand and select Fail to WC Latency (Figure 6-4). 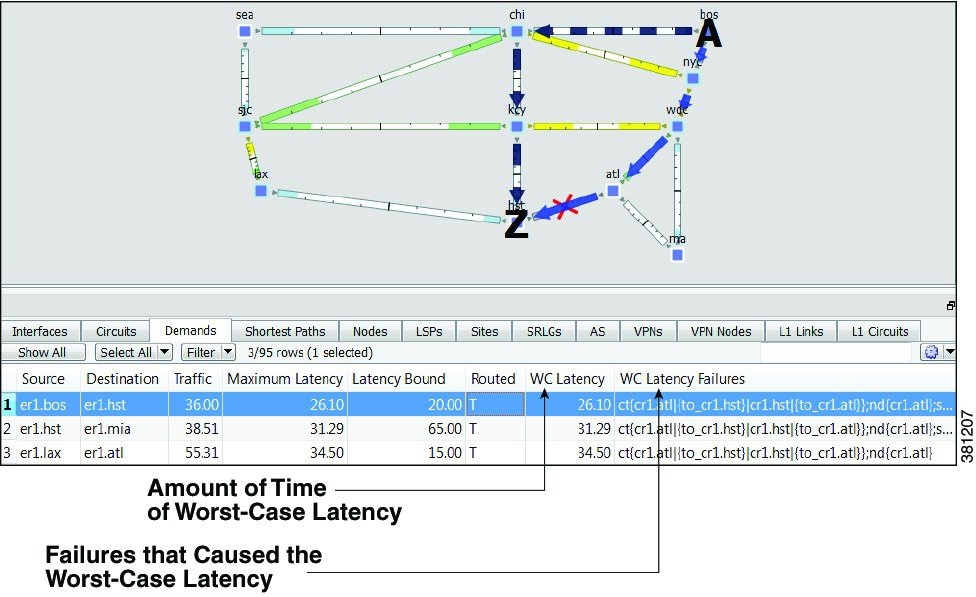 The Failure Impact view is available upon running a Simulation Analysis (Figure 6-5). The plot in this view colors the nodes and circuits according to the maximum utilization level that would be caused elsewhere in the network should the node or circuit fail. The color indicates the resulting utilization and severity of the congestion.

The Failure Impact view only shows the impact of circuit and node failures. It does not show failures of other objects. 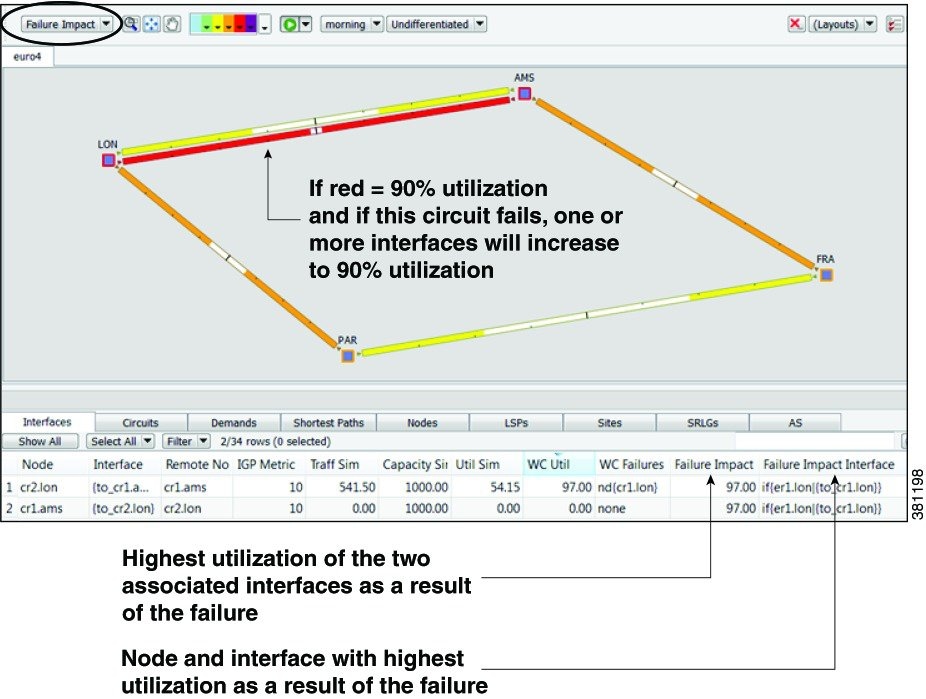 Each time Simulation Analysis is run, a report is automatically generated. You can access this information again by selecting the Window->Reports menu. Note that new reports replace previous ones.

If you select an interface, you are actually protecting its associated circuit.

Right-click one or more like objects from their respective tables. The Properties dialog box appears.

Click the Protected check box to toggle it on or off. A check mark means the object is protected.

Select one or more failure sets.

Select one or more traffic levels.

Define the maximum number of failure scenarios to record per interface. The default is 10.

Select whether or not to record demand worst-case latency calculations.

Select whether or not to record VPN worst-case utilizations and latencies. For more information, see the VPN Simulation chapter.

Once you have executed a Simulation Analysis, you can select a subset of failure scenarios or service classes, and view the results for just these subsets. This practice saves time in that you do not have to rerun the analysis.

Click the red cross in the top, right toolbar. A list of failure scenarios, service classes, and traffic levels appears. These are the options on which you last ran a Simulation Analysis.

Click one or more failure sets and service classes.

If you need to change the traffic level selection, you must rerun a Simulation Analysis.