Access lists perform packet filtering to control which packets move through the network and where. Such controls help to limit network traffic and restrict the access of users and devices to the network. Access lists have many uses, and therefore many commands accept a reference to an access list in their command syntax. Access lists can be used to do the following:

An access control list (ACL) consists of one or more access control entries (ACE) that collectively define the network traffic profile. This profile can then be referenced by Cisco IOS XR software features such as traffic filtering, route filtering, QoS classification, and access control.

Traditional ACLs do not support commpression. Object-group ACLs use compression to accommodate the large number of ACEs.

You can also filter packets on the basis of transport layer information, such as whether the packet is a TCP, UDP, ICMP, or IGMP packet.

The following image illustrates the workflow of an ACL.

Address filtering uses wildcard masking to indicate whether the software checks or ignores corresponding IP address bits when comparing the address bits in an access-list entry to a packet being submitted to the access list. By carefully setting wildcard masks, an administrator can select a single or several IP addresses for permit or deny tests.

Wildcard masking for IP address bits uses the number 1 and the number 0 to specify how the software treats the corresponding IP address bits. A wildcard mask is sometimes referred to as an inverted mask, because a 1 and 0 mean the opposite of what they mean in a subnet (network) mask.

You do not have to supply a wildcard mask with a source or destination address in an access list statement. If you use the host keyword, the software assumes a wildcard mask of 0.0.0.0.

You must be aware of the following restrictions for configuring access lists.

The other actions that can be performed on an ACL are: 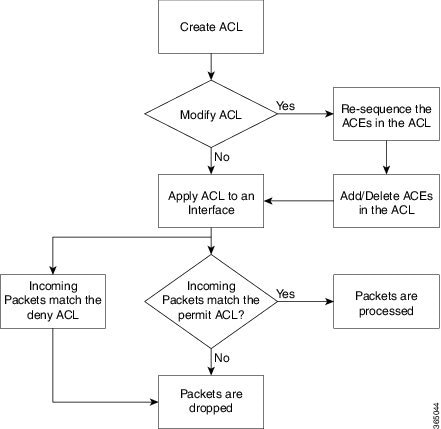 Verify that the permit and deny settings are according to the set configuration.

After creating an access list, you must apply it to a line or an interface. ACL commit fails while adding and removing unique Access List Entries (ACE). This happens due to the absence of an assigned manager process. The user has to exit the ACL configuration mode and re-enter it before adding the first ACE.

Verify that the permit and remark settings are according to the set configuration.

After creating an access list, you must apply it to a line or an interface. ACL commit fails while adding and removing unique Access List Entries (ACE). This happens due to the absence of an assigned manager process. The user has to exit the config-ipv4-acl or config-ipv6-acl mode to configuration mode and re-enter the same mode before adding the first ACE.

Applies the access lists on the interface, which acts as filters on packets inbound from TenGigE interface 0/0/0/2.

Verify that the ACL applied (acl_1) on the interface is listed:

Verify that the access list (acl_1) contains all permit and deny options (after resequencing) that were configured:

This use case explains how to create, resequence, add new entries, delete an entry and verify the ACL:

Prefix lists are used in route maps and route filtering operations and can be used as an alternative to access lists in many Border Gateway Protocol (BGP) route filtering commands. A prefix is a portion of an IP address, starting from the far left bit of the far left octet. By specifying exactly how many bits of an address belong to a prefix, you can then use prefixes to aggregate addresses and perform some function on them, such as redistribution (filter routing updates).

Prefix lists can be used as an alternative to access lists in many BGP route filtering commands. It is configured under the Global configurations of the BGP protocol. The advantages of using prefix lists are as follows:

Before using a prefix list in a command, you must set up a prefix list, and you may want to assign sequence numbers to the entries in the prefix list.

Filtering by prefix list involves matching the prefixes of routes with those listed in the prefix list. When there is a match, the route is used. More specifically, whether a prefix is permitted or denied is based upon the following rules:

The show commands include the sequence numbers in their output.

Verify that the permit and remark settings are according to the set configuration.

Atomic ACL updates involve the insertion, modification, or removal of Access List Entries (ACEs) on an interface that is in operation. Such atomic updates consume up to 50% of TCAM resources. There can be an instance where multiple modifications are required and the available resources are not sufficient. The solution to this problem is to disable atomic ACL updates such that the old ACEs are deleted before the new ACEs are added.

To disable atomic updates on the hardware, by permitting packets that match the ACE rule, use the following configuration.

To disable atomic updates on the hardware, by denying all packets until the modification is complete, use the following configuration.

On disabling atomic ACL updates on the hardware, use the steps in this section to modify ACLs.

Use the following steps to add an ACE.

Use the steps in this section to delete an ACE.

Use the steps in this section to replace an ACE.

Delete an ACE and Add a New ACE

Use the following steps to delete an ACE and add a new ACE.

Similarly, you can combine the addition, removal, and replacement of ACEs.