Cisco IP security (IPsec) authentication provides anti-replay protection against an attacker duplicating encrypted packets by assigning a unique sequence number to each encrypted packet. The decryptor keeps track of which packets it has seen on the basis of these numbers. Currently, the default window size is 64 packets. Generally, this number (window size) is sufficient, but there are times when you may want to expand this window size. The IPsec Anti-Replay Window: Expanding and Disabling feature allows you to expand the window size, allowing the decryptor to keep track of more than 64 packets.

At times, however, the 64-packet window size is not sufficient. For example, Cisco quality of service (QoS) gives priority to high-priority packets, which could cause some low-priority packets to be discarded when they arrive outside of the 64 packet replay window at the decryptor. The IPsec Anti-Replay Window: Expanding and Disabling feature allows you to expand the window size, allowing the decryptor to keep track of more than 64 packets.

Increasing the anti-replay window size has no impact on throughput and security. The impact on memory is insignificant because only an extra 128 bytes per incoming IPsec SA is needed to store the sequence number on the decryptor. It is recommended that you use the full 1024 window size to eliminate any future anti-replay problems.

How to Configure IPsec Anti-Replay Window Expanding and Disabling

To configure IPsec Anti-Replay Window: Expanding and Disabling globally (so that it affects all SAs that are created), perform the following steps.

To configure IPsec Anti-Replay Window: Expanding and Disabling on a crypto map so that it affects those SAs that have been created using a specific crypto map or profile, perform the following steps.

The above message is generated when a received packet is judged to be outside the anti-replay window.

Global Expanding and Disabling of an Anti-Replay Window Example

The following example shows that the anti-replay window size has been set globally to 1024:

It is normal for packets to be reordered in IP networks, where QoS mechanisms (on the egress interface of the encrypting device or on other network elements in the path), loadbalancing mechanisms or routing / path selection mechanisms (that send different flows over different paths) are used. 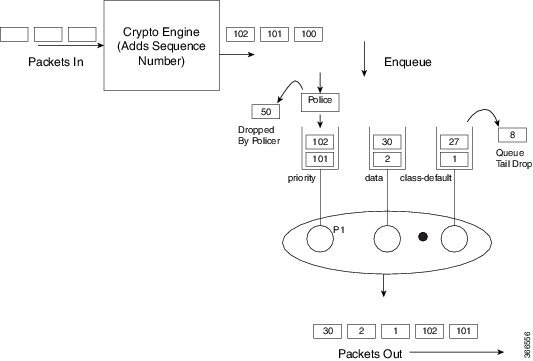 Moving QoS scheduling before the encryption may solve the anti-replay issue but would render the QoS functionality useless. In addition, scheduling needs to be driven by the congestion of the egress interface (or a shaper on that interface). Increasing the size of the anti-replay window places a huge load load on the memory of the devices that handles this functionality. 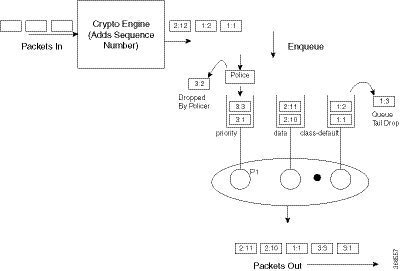 The Anti-Replay drops can occur in the following situations:

Given below is the command to enable multiple sequence number space per IPSec SA:

This command displays the IPsec SA in the fman-fp process for a given flow ID:

This command retrieves the IPSec SA ID for the given peer and displays the SA in all the layers, which is from the IOS layer to the QFP layer.