The main advantage of the MPLS VPN Route Target Rewrite feature is that it keeps the administration of routing policy local to the autonomous system.

The figure below shows an example of route target replacement on ASBRs in an Multiprotocol Label Switching (MPLS) VPN interautonomous system topology. This example includes the following configurations: 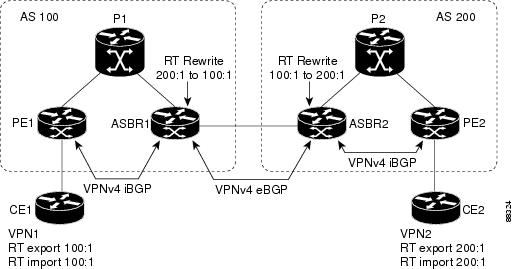 The figure below shows an example of route target replacement on route reflectors in an MPLS VPN interautonomous system topology. This example includes the following configurations: 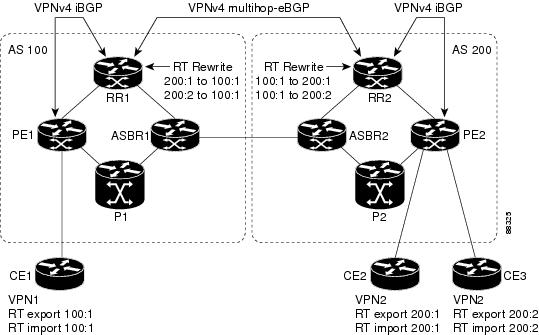 Perform this task to configure a route target (RT) replacement policy for your internetwork.

If you configure a provider edge (PE) device to rewrite RT x to RT y and the PE has a virtual routing and forwarding (VRF) instance that imports RT x , you need to configure the VRF to import RT y in addition to RT x .

Perform the following tasks to apply the route target replacement policy to your internetwork:

After you have defined two devices to be Border Gateway Protocol (BGP) neighbors, the devices form a BGP connection and exchange routing information. If you subsequently change a routing policy, you must reset BGP connections for the configuration change to take effect. After configuring the route target (RT) replacement policy and applying it to the target devices in your system, you must refresh the BGP session to put the policy into operation.

You can issue the debug ip bgp updates command on the device where you entered the clear ip bgp command to verify that the updates are occurring.

This example shows the route target (RT) replacement configuration of an autonomous system border router (ASBR1) that exchanges Virtual Private Network Version 4 (VPNv4) prefixes with another ASBR (ASBR2). The route map extmap is configured to replace RTs on inbound updates. Any incoming update with RT 100:3 is replaced with RT 200:3. Any other prefixes with an RT whose autonomous system number is 100 is rewritten to RT 200:4.

This example shows the use of the route-map configuration continue command when you need to apply more than one replacement rule on an update. In this example, an incoming update with RT 100:3 is replaced with RT 200:3. Without the continue 20 command, route-map evaluation would stop when a match on sequence 10 is made. With the continue 20 command, route-map evaluation continues into sequence 20 even if a match occurs in sequence 10. If the incoming update has an RT 100:4, the device replaces it with RT 200:4.

This example shows the association of the same route map with the outbound BGP neighbor. The route map is configured to replace RTs on outgoing updates.

The following example shows the clear ip bgp command used to initiate a dynamic reconfiguration in the Border Gateway Protocol (BGP) peer 172.16.0.2. This command requires that the peer supports the route refresh capability.

autonomous system—A collection of networks that share the same routing protocol and that are under the same system administration.

LSR—label switch router. The role of an LSR is to forward packets in an MPLS network by looking only at the fixed-length label.

MPLS—Multiprotocol Label Switching. A switching method that forwards IP traffic using a label. This label instructs the devices and the switches in the network where to forward the packets based on preestablished IP routing information.

NLRI—Network Layer Reachability Information. BGP sends routing update messages containing NLRI, which describes the route. In this context, an NLRI is a prefix. A BGP update message carries one or more NLRI prefixes and the attributes of a route for the NLRI prefixes. The route attributes include a BGP next-hop gateway address, community values, and other information.

P device—provider device. The core device in the service provider network that connects to provider edge (PE) devices. In a packet-switched star topology, a device that is part of the backbone and that serves as the single pipe through which all traffic from peripheral networks must pass on its way to other peripheral networks.

RD—route distinguisher. An 8-byte value that is concatenated with an IPv4 prefix to create a unique VPN IPv4 (VPNv4) prefix.

RR—route reflector. A device that advertises, or reflects, IBGP learned routes to other IBGP peers without requiring a full network mesh.

RT—route target. Extended community attribute used to identify the VRF routing table into which a prefix is to be imported.

VPN—Virtual Private Network. A group of sites that, as a result of a set of administrative policies, can communicate with each other over a shared backbone.