Protocol Independent Multicast (PIM) is used between devices so that they can track which multicast packets to forward to each other and to their directly connected LANs. PIM works independently of the unicast routing protocol to perform send or receive multicast route updates like other protocols. Regardless of which unicast routing protocols are being used in the LAN to populate the unicast routing table, Cisco IOS PIM uses the existing unicast table content to perform the Reverse Path Forwarding (RPF) check instead of building and maintaining its own separate routing table.

You can configure IPv6 multicast to use either a PIM- Sparse Mode (SM) or PIM-Source Specific Multicast (SSM) operation, or you can use both PIM-SM and PIM-SSM together in your network.

PIM-SM is used in a multicast network when relatively few devices are involved in each multicast and these devices do not forward multicast packets for a group, unless there is an explicit request for the traffic. PIM-SM distributes information about active sources by forwarding data packets on the shared tree. PIM-SM initially uses shared trees, which requires the use of an RP.

Requests are accomplished via PIM joins, which are sent hop by hop toward the root node of the tree. The root node of a tree in PIM-SM is the RP in the case of a shared tree or the first-hop device that is directly connected to the multicast source in the case of a shortest path tree (SPT). The RP keeps track of multicast groups and the hosts that send multicast packets are registered with the RP by that host’s first-hop device.

A multicast data sender sends data destined for a multicast group. The designated router (DR) of the sender takes those data packets, unicast-encapsulates them, and sends them directly to the RP. The RP receives these encapsulated data packets, de-encapsulates them, and forwards them onto the shared tree. The packets then follow the (*, G) multicast tree state in the devices on the RP tree, being replicated wherever the RP tree branches, and eventually reaching all the receivers for that multicast group. The process of encapsulating data packets to the RP is called registering, and the encapsulation packets are called PIM register packets.

Cisco devices use PIM-SM to forward multicast traffic and follow an election process to select a designated device when there is more than one device on a LAN segment.

The designated router (DR) is responsible for sending PIM register and PIM join and prune messages toward the RP to inform it about active sources and host group membership.

If there are multiple PIM-SM devices on a LAN, a DR must be elected to avoid duplicating multicast traffic for connected hosts. The PIM device with the highest IPv6 address becomes the DR for the LAN unless you choose to force the DR election by use of the ipv6 pim dr-priority command. This command allows you to specify the DR priority of each device on the LAN segment (default priority = 1) so that the device with the highest priority will be elected as the DR. If all devices on the LAN segment have the same priority, then the highest IPv6 address is again used as the tiebreaker.

The figure below illustrates what happens on a multiaccess segment. Device A and Device B are connected to a common multiaccess Ethernet segment with Host A as an active receiver for Group A. Only Device A, operating as the DR, sends joins to the RP to construct the shared tree for Group A. If Device B was also permitted to send (*, G) joins to the RP, parallel paths would be created and Host A would receive duplicate multicast traffic. Once Host A begins to source multicast traffic to the group, the DR’s responsibility is to send register messages to the RP. If both devices were assigned the responsibility, the RP would receive duplicate multicast packets and result in wastage of bandwidth. 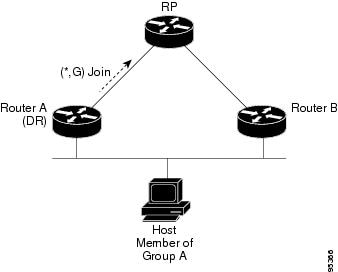 If the DR should fail, the PIM-SM provides a way to detect the failure of Device A and elect a failover DR. If the DR (Device A) became inoperable, Device B would detect this situation when its neighbor adjacency with Device A timed out. Because Device B has been hearing MLD membership reports from Host A, it already has MLD state for Group A on this interface and would immediately send a join to the RP when it became the new DR. This step reestablishes traffic flow down a new branch of the shared tree via Device B. Additionally, if Host A were sourcing traffic, Device B would initiate a new register process immediately after receiving the next multicast packet from Host A. This action would trigger the RP to join the SPT to Host A via a new branch through Device B.

The device searches for embedded RP group addresses in MLD reports or PIM messages and data packets. On finding such an address, the device learns the RP for the group from the address itself. It then uses this learned RP for all protocol activity for the group. For devices that are the RP, the device is advertised as an embedded RP must be configured as the RP.

To select a static RP over an embedded RP, the specific embedded RP group range or mask must be configured in the access list of the static RP. When PIM is configured in sparse mode, you must also choose one or more devices to operate as an RP. An RP is a single common root placed at a chosen point of a shared distribution tree and is configured statically in each box.

PIM DRs forward data from directly connected multicast sources to the RP for distribution down the shared tree. Data is forwarded to the RP in one of two ways:

A PIM device can be an RP for more than one group. Only one RP address can be used at a time within a PIM domain for a certain group. The conditions specified by the access list determine for which groups the device is an RP.

IPv6 multicast supports the PIM accept register feature, which is the ability to perform PIM-SM register message filtering at the RP. The user can match an access list or compare the AS path for the registered source with the AS path specified in a route map. 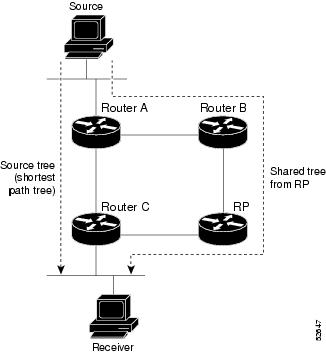 If the data threshold warrants, leaf devices on the shared tree may initiate a switch to the data distribution tree rooted at the source. This type of distribution tree is called a shortest path tree or source tree. By default, the software switches to a source tree upon receiving the first data packet from a source.

The following process details the move from shared tree to source tree:

Reverse-path forwarding is used for forwarding multicast datagrams. It functions as follows:

PIM uses both source trees and RP-rooted shared trees to forward datagrams; the RPF check is performed differently for each, as follows:

Turning Off IPv6 PIM on a Specified Interface

The following example shows how to configure a device to use PIM-SM using 2001:DB8::1 as the RP. It sets the SPT threshold to infinity to prevent switchover to the source tree when a source starts sending traffic and sets a filter on all sources that do not have a local multicast BGP prefix.

This example displays information about interfaces configured for PIM:

The following example sets the DR priority, the PIM hello interval, and the periodic join and prune announcement interval on Ethernet interface 0/0.