The Source Specific Multicast (SSM) Mapping feature extends the Cisco suite of SSM transition tools, which also includes URL Rendezvous Directory (URD) and Internet Group Management Protocol Version 3 Lite (IGMP v3lite). SSM mapping supports SSM transition in cases where neither URD nor IGMP v3lite is available, or when supporting SSM on the end system is impossible or unwanted due to administrative or technical reasons. SSM mapping enables you to leverage SSM for video delivery to legacy set-top boxes (STBs) that do not support IGMPv3 or for applications that do not take advantage of the IGMPv3 host stack.

One option available for using SSM mapping is to install it together with a Domain Name System (DNS) server to simplify administration of the SSM Mapping feature in larger deployments.

Before you can configure and use SSM mapping with DNS lookups, you need to add records to a running DNS server. If you do not already have a DNS server running, you need to install one.

The Cisco IOS XE software does not provide for DNS server functionality. You may want to use a product such as Cisco Network Registrar (CNR).

Protocol Independent Multicast (PIM) SSM, or PIM-SSM, is the routing protocol that supports the implementation of SSM and is derived from PIM sparse mode (PIM-SM). IGMP is the Internet Engineering Task Force (IETF) standards track protocol used for hosts to signal multicast group membership to routers. IGMP Version 3 supports source filtering, which is required for SSM. IGMP For SSM to run with IGMPv3, SSM must be supported in the router, the host where the application is running, and the application itself.

In SSM, traffic from each source is forwarded between routers in the network independent of traffic from other sources. Thus different sources can reuse multicast group addresses in the SSM range.

Easy to Install and Manage

SSM is easy to install and provision in a network because it does not require the network to maintain which active sources are sending to multicast groups. This requirement exists in ISM (with IGMPv1, IGMPv2, or IGMPv3).

The current standard solutions for ISM service are PIM-SM and MSDP. Rendezvous point (RP) management in PIM-SM (including the necessity for Auto-RP or BSR) and MSDP is required only for the network to learn about active sources. This management is not necessary in SSM, which makes SSM easier than ISM to install and manage, and therefore easier than ISM to operationally scale in deployment. Another factor that contributes to the ease of installation of SSM is the fact that it can leverage preexisting PIM-SM networks and requires only the upgrade of last hop routers to support IGMPv3, IGMP v3lite, or URD.

The Cisco IOS suite of SSM transition solutions consists of the following transition solutions that enable the immediate development and deployment of SSM services, without the need to wait for the availability of full IGMPv3 support in host operating systems and SSM receiver applications:

IGMP v3lite is a solution for application developers that allows immediate development of SSM receiver applications switching to IGMPv3 as soon as it becomes available.

URD is an SSM transition solution for content providers and content aggregators that allows them to deploy receiver applications that are not yet SSM enabled (through support for IGMPv3) by enabling the receiving applications to be started and controlled through a web browser.

SSM mapping supports SSM transition in cases where neither URD nor IGMP v3lite are available, or when supporting SSM on the end system is impossible or unwanted due to administrative or technical reasons.

SSM mapping supports SSM transition in cases where neither URD nor IGMP v3lite is available, or when supporting SSM on the end system is impossible or unwanted due to administrative or technical reasons. Using SSM to deliver live streaming video to legacy STBs that do not support IGMPv3 is a typical application of SSM mapping.

Prior to the introduction of SSM mapping, the following conditions would have prevented SSM transition in the case of legacy STB deployments with STB receivers that only support IGMPv1 or IGMPv2:

SSM mapping provides an SSM transition solution for hosts and applications that meet those conditions.

In a typical STB deployment, each TV channel uses one separate IP multicast group and has one active server host sending the TV channel. A single server may of course send multiple TV channels, but each to a different group. In this network environment, if a router receives an IGMPv1 or IGMPv2 membership report for a particular group G, the report implicitly addresses the well-known TV server for the TV channel associated with the multicast group.

SSM mapping introduces a means for the last hop router to discover sources sending to groups. When SSM mapping is configured, if a router receives an IGMPv1 or IGMPv2 membership report for a particular group G, the router translates this report into one or more (S, G) channel memberships for the well-known sources associated with this group.

When the router receives an IGMPv1 or IGMPv2 membership report for group G, the router uses SSM mapping to determine one or more source IP addresses for group G. SSM mapping then translates the membership report as an IGMPv3 report INCLUDE (G, [S1, G], [S2, G]...[Sn, G] and continues as if it had received an IGMPv3 report. The router then sends out PIM joins toward (S1, G) to (Sn, G) and continues to be joined to these groups as long as it continues to receive the IGMPv1 or IGMPv2 membership reports and as long as the SSM mapping for the group remains the same. SSM mapping, thus, enables you to leverage SSM for video delivery to legacy STBs that do not support IGMPv3 or for applications that do not take advantage of the IGMPv3 host stack.

SSM static mapping enables you to configure the last hop router to use a static map to determine the sources sending to groups. Static SSM mapping requires that you configure access lists (ACLs) to define group ranges. The groups permitted by those ACLs then can be mapped to sources using the ip igmp static ssm-map global configuration command.

DNS-based SSM mapping enables you to configure the last hop router to perform a reverse DNS lookup to determine sources sending to groups (see the figure below). When DNS-based SSM mapping is configured, the router constructs a domain name that includes the group address G and performs a reverse lookup into the DNS. The router looks up IP address resource records (IP A RRs) to be returned for this constructed domain name and uses the returned IP addresses as the source addresses associated with this group. SSM mapping supports up to 20 sources for each group. The router joins all sources configured for a group. 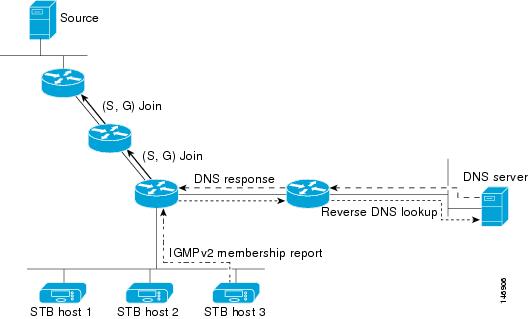 To look up one or more source addresses for a group G that includes G1, G2, G3, and G4, the following DNS resource records (RRs) must be configured on the DNS server:

The multicast-domain argument is a configurable DNS prefix. The default DNS prefix is in-addr.arpa. You should only use the default prefix when your installation is either separate from the internet or if the group names that you map are global scope group addresses (RFC 2770 type addresses that you configure for SSM) that you own.

The timeout argument configures the length of time for which the router performing SSM mapping will cache the DNS lookup. This argument is optional and defaults to the timeout of the zone in which this entry is configured. The timeout indicates how long the router will keep the current mapping before querying the DNS server for this group. The timeout is derived from the cache time of the DNS RR entry and can be configured for each group/source entry on the DNS server. You can configure this time for larger values if you want to minimize the number of DNS queries generated by the router. Configure this time for a low value if you want to be able to quickly update all routers with new source addresses.

How to Configure SSM Mapping

Perform this task to configure the last hop router in an SSM deployment to use static SSM mapping to determine the IP addresses of sources sending to groups.

Proceed to the Configuring DNS-Based SSM Mapping (CLI) or to the Verifying SSM Mapping Configuration and Operation.

Perform this task to configure the last hop router to perform DNS lookups to learn the IP addresses of sources sending to a group.

Proceed to the Verifying SSM Mapping Configuration and Operation.

This table describes the significant commands shown in the SSM mapping configuration example.

The following example shows how to create a zone and import the zone data using Network Registrar:

The following example shows how to import the zone files from a named.conf file for BIND 8: