This document describes a problem with Cisco Unity Connection where the Media Convergence Server (MCS) 7835 I3 experiences a failed drive and describes the process that is used in order to address the issue. This document also addresses an issue where the drive does not automatically rebuild.

The Cisco Unity Connection MCS 7835 I3 experiences a failed drive and must be replaced. The failed drive is indicated by an amber light on the drive, or when you enter the Show Hardware command from the CLI, a State: Degraded appears under the Logical Drives Information.

If the drives are functional (no adverse issues), then you see this information:

Note: The drive sizes on your server might vary from those shown in the image.

After the server drive fails, you must replace the drive.

Once the procedure is complete and the drive is rebuilt (this can take between two and ten hours, dependent upon the server type), enter the Show Hardware command from the CLI.

If the procedure worked properly, you see State: Optimal under the Logical Drives Information:

Note: The drive sizes on your server might vary from those shown in the image.

If sufficient time has passed and you continue to see State: Degraded under the Logical Drives Information, it indicates that the drive rebuild did not occur or it is not complete.

The presence of older firmware on the RAID controller is the most likely cause of the automatic drive rebuild failure.

Here is the output from the Show Hardware command. Notice the Raid firmware version field: 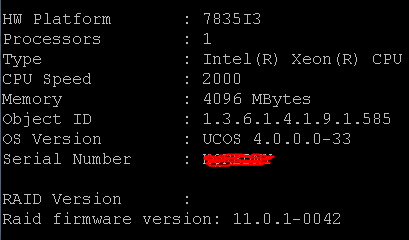 Note: Version 11.0.1-0042 was the most recent firmware version when this document was initially published.

After you verify that an older firmware version is present in the system, that the replacement hard drive is seated and works properly, and that the RAID controller is functional, then check the IBM MegaRAID utility upon boot up in order to see the actual state of the RAID controller. For an IBM system on a Cisco Unity Connection MCS 7835 I3, press Ctrl+H during the boot process. 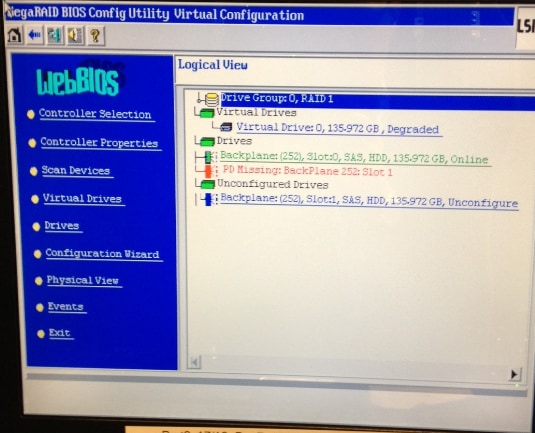 Complete these steps if your interface appears similar to the previous image:

Update Firmware on an IBM Server

Complete these steps in order to update the firmware version on an MCS 78xx I server:

Note: Each version has an ISO that you can copy to CD. A Readme file is also available that describes the steps that are used in order to upgrade the firmware version for the server.