LAN switches use forwarding tables (Layer 2 (L2) tables, Content Addressable Memory (CAM) tables) to direct traffic to specific ports based on the VLAN number and the destination MAC address of the frame. When there is no entry corresponding to the frame's destination MAC address in the incoming VLAN, the (unicast) frame will be sent to all forwarding ports within the respective VLAN, which causes flooding.

Limited flooding is part of the normal switching process. There are situations, however, when continuous flooding can cause adverse performance effects on the network. This document explains what issues can arise due to flooding, and the most common reasons why certain traffic might constantly be flooded. 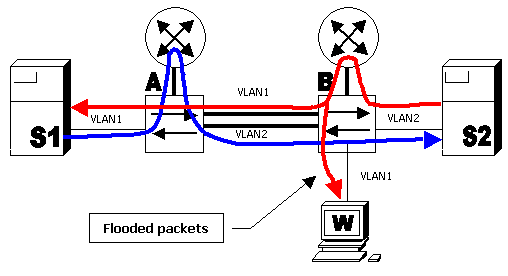 Packets from S2 to S1 go along the following path:

This behavior is called asymmetric routing. Packets follow different paths depending on the direction. Asymmetric routing is one of the two most common causes of flooding.

Returning to the above example, the result is that packets of the data transfer between S1 and S2 will mostly be flooded to VLAN 2 on switch A and to VLAN 1 on switch B. This means every connected port (workstation W in this example) in VLAN 1 on switch B will receive all packets of conversation between S1 and S2. Suppose the server backup takes 50 Mbps of bandwidth. This amount of traffic will saturate 10 Mbps links. This will cause a complete connectivity outage to the PCs or slow them down considerably.

This flooding is due to asymmetric routing, and may stop when server S1 sends a broadcast packet (for example Address Resolution Protocol (ARP)). Switch A will flood this packet to VLAN 1 and switch B will receive and learn the MAC address of S1. Since the switch is not receiving traffic constantly, this forwarding entry will eventually age out and flooding will resume. The same process applies to S2.

There are different approaches to limit the flooding caused by asymmetric routing. Refer to these documents for more information:

The approach is normally to bring the router's ARP timeout and the switches' forwarding table-aging time close to each other. This will cause the ARP packets to be broadcast. Relearning must occur before the L2 forwarding table entry ages out.

A typical scenario where this kind of issue might be observed is when there are redundant Layer 3 (L3) switches (such as a Catalyst 6000 with Mutilayer Switch Feature Card (MSFC)) configured to load-balance with Hot Standby Router Protocol (HSRP). In this case, one switch will be active for even VLANs and the other one will be active for odd VLANs.

Another common issue caused by flooding is Spanning-Tree Protocol (STP) Topology Change Notification (TCN). TCN is designed to correct forwarding tables after the forwarding topology has changed. This is necessary to avoid a connectivity outage, as after a topology change some destinations previously accessible via particular ports might become accessible via different ports. TCN operates by shortening the forwarding table aging time, such that if the address is not relearned, it will age out and flooding will occur.

TCNs are triggered by a port that is transitioning to or from the forwarding state. After the TCN, even if the particular destination MAC address has aged out, flooding should not happen for long in most cases since the address will be relearned. The issue might arise when TCNs are occurring repeatedly with short intervals. The switches will constantly be fast-aging their forwarding tables so flooding will be nearly constant.

Normally, a TCN is rare in a well-configured network. When the port on a switch goes up or down, there is eventually a TCN once the STP state of the port is changing to or from forwarding. When the port is flapping, repetitive TCNs and flooding occurs.

Ports with the STP portfast feature enabled will not cause TCNs when going to or from the forwarding state. Configuration of portfast on all end-device ports (such as printers, PCs, servers, and so on) should limit TCNs to a low amount. Refer to this document for more information on TCNs:

Note: In MSFC IOS, there is an optimization that will trigger VLAN interfaces to repopulate their ARP tables when there is a TCN in the respective VLAN. This limits flooding in case of TCNs, as there will be an ARP broadcast and the host MAC address will be relearned as the hosts reply to ARP.

Forwarding table exhaustion can also be caused by an attack on the network where one host starts generating frames each sourced with different MAC address. This will tie up all the forwarding table resources. Once the forwarding tables become saturated, other traffic will be flooded because new learning cannot occur. This kind of attack can be detected by examining the switch forwarding table. Most of the MAC addresses will point to the same port or group of ports. Such attacks can be prevented by limiting the number of MAC addresses learned on untrusted ports by using the port security feature.

Configuration Guides for Catalyst switches running Cisco IOS® or CatOS software have a section called Configuring Port Security or Configuring Port-Based Traffic Control. Refer to the Technical Documentation for your switch on the Cisco Switches product pages for more information.

Note: If unicast flooding occurs in a switch port which is configured for Port Security with the condition of "Restrict" to arrest the flooding, a security violation is trigerred.

Note: When such a security violation occurs, the affected ports configured for "restrict" mode should drop packets with unknown source addresses until you remove a sufficient number of secure MAC addresses to drop below the maximum value. This causes the SecurityViolation counter to increment.

Note: Instead of this behavior, if the switch port moves to "Shutdown" state then you need to configure Router(config-if)#switchport block unicast so that the particular switch port is disabled for unicast flooding.

How to Detect Excessive Flooding

Most switches implement no special command to detect flooding. Catalyst 6500/6000 Supervisor Engine 2 and higher series switches running Cisco IOS System software (Native) version 12.1(14)E and higher or Cisco CatOS system software version 7.5 or higher implements 'unicast flood protection' feature. In short, this feature allows the switch to monitor the amount of unicast flooding per VLAN and take specified action if flooding exceeds specified amount. Actions can be to syslog, limit or shutdown VLAN - the syslog being the most useful for flood detection. When flooding exceeds the configured rate and the action configured is syslog, a message similar to the following will be printed:

You may detect if flooding is occurring by capturing a trace of packets seen on a workstation during the time of slowdown or outage. Normally, unicast packets not involving the workstation should not be seen repeatedly on the port. If this is happening, chances are that there is flooding occurring. Packet traces may look different when there are various causes of flooding.

With asymmetric routing, there are likely to be packets to specific MAC address that will not stop flooding even after the destination replies. With TCNs, the flooding will include many different addresses, but should eventually stop and then restart.

With L2 forwarding table overflow, you are likely to see same kind of flooding as with asymmetric routing. The difference is that there will likely be a high amount of strange packets, or normal packets in abnormal quantities with a different source MAC address.