As customers move to lean branch-office architecture, they need to know which applications need to run at the branch location and what computing resources are required. Each application has its own unique behavior. Some applications may be memory intensive, and others may be storage intensive. Hence, as more applications co‑reside on a sever in a virtualized environment, just calculating the CPU, memory, and disk space required for each application is not enough.

This document demonstrates the performance of the Cisco UCS® E-Series Servers running applications that are CPU, memory, and I/O intensive.

●   Single-wide blade server powered by a high-performance yet power-efficient Intel Xeon processor E3 with four cores, up to 16 GB of RAM, and 2 terabytes (TB) of local storage

Cisco is also releasing a newer version of the 4-core single-wide server module that includes an upgraded processor. The newer version of the single-wide module will be released toward the end of March 2014. These new Cisco UCS E140S M2 module blades will have the new, more powerful Intel Ivy Bridge processor with four cores clocked at 1.8 GHz. The tests reported in this document were conducted on the Cisco UCS E140S M1 module.

Figures 1 and 2 show the two form factors of the Cisco UCS E-Series.

Customers are attracted to the compact form factors of the Cisco UCS E-Series computing blades. The blade servers slide into a Cisco ISR G2, allowing retailers to save valuable floor space and to display more merchandise instead of servers and other appliances. With this converged infrastructure using the Cisco UCS E-Series, customers are eliminating dedicated appliances and choosing to run more applications virtually.

In addition to saving space, customers spend less on power costs. The Cisco UCS E-Series saves up to 80 percent in power costs, resulting in significant savings in operating costs. The solution also reduces complexity, eliminating the need to run external cables. Taking advantage of the Cisco ISR G2 architecture, the Cisco UCS E‑Series blade communicates with the router through the back-plane Layer 2 and Layer 3 interfaces, thus providing a complete cable-free, “branch-office in a box” deployment (Figure 3). Customers still can connect to the external Gigabit Ethernet interfaces on the modules if they want to run them independent of the routers and, essentially, rely on the routers only for the power supply.

Note:    Router performance was not tested and is not within the scope of this document. In all cases, external network interface cards for the server were used to transport management and application traffic to and from the server.

Table 6 lists the applications that were run in the performance tests for each Cisco UCS E-Series blade.

As stated earlier, each of these applications has unique properties that stress the Cisco UCS E-Series. Some of these applications are memory intensive, some are CPU intensive, and some are disk-write intensive. In each blade, both the type of applications run and the number of sessions for each application varied. For example, typically a Cisco 2911 ISR with a Cisco UCS E-Series Server is deployed in small to medium-sized businesses or branch offices or stores that host three or four applications. Applications such as WAN optimization would be deployed because such locations typically have slow WAN links. If a point-of-sale application is deployed, typically no more than three or four terminals are operational at such locations. Similarly, no more than five video surveillance cameras typically are deployed in these types of locations.

Tables 7 through 9 classify the applications deployed and the scale for each type of deployment.

Each of these applications targets a specific component on the Cisco UCS E-Series. Table 10 summarizes the target characteristics of each of the applications.

These applications help characterize the performance of the Cisco UCS E-Series computing blades.

Note:    All applications, except Cisco WAAS, running on the Cisco UCS E-Series in this profile used the external Ethernet interface on the module. Cisco WAAS took advantage of the internal back-plane connections with the Cisco ISR G2 and used these to intercept and redirect WAN traffic.

Cisco VSM 7.2 was deployed, which monitored and recorded streams from five physical security cameras. Three point-of-sale registers were deployed, which accessed data from the point-of-sale server running on the Cisco UCS E-Series. Cisco vWAAS was deployed for 1300 sessions on the Cisco UCS E-Series and was set to continuously optimize 50 Mbps of HTTP traffic. With all these applications running concurrently, the average CPU utilization was about 32 percent, with the peak CPU utilization reaching 44 percent. Figure 4 shows the overall CPU utilization. 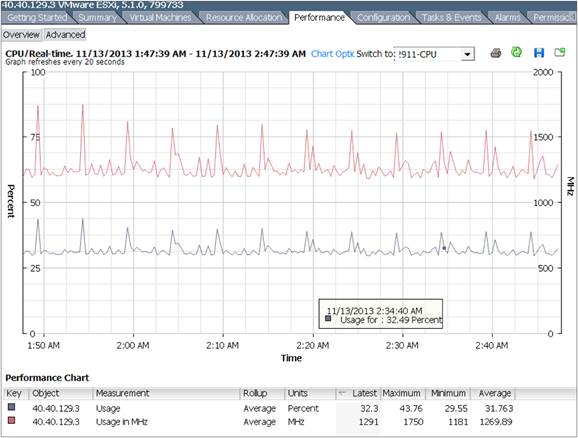 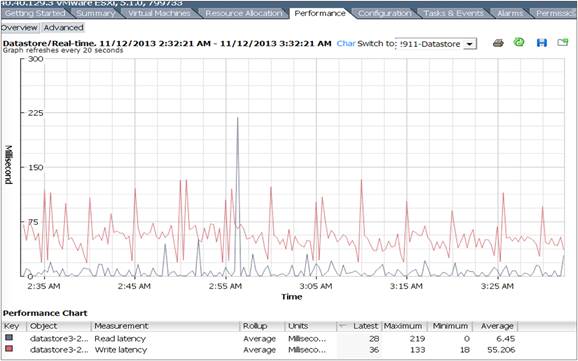 As shown by the preceding test results, even with these applications, the maximum threshold of the Cisco UCS E140S was not reached, and there still was room to deploy additional applications. Core Microsoft Windows applications such as the Domain Host Configuration Protocol (DHCP) server, domain controller, Microsoft Active Directory, and Domain Name System (DNS) server typically are deployed on the Cisco UCS E-Series, and this platform is an excellent fit for deploying these services.

The medium-sized branch office or store deployment used the Cisco 2951 ISR G2 running Cisco IOS Software Release 15.3(3) M1 with the Cisco UCS E140D. This 4-core double-wide blade was installed with 48 GB of RAM and three 1-TB HDDs in RAID 5 mode. Effective hard drive capacity was about 1.8 TB. CPU oversubscription was enabled, and hence up to 12 vCPUs were used on an 8-vCPU blade. The test results show CPU oversubscription on the Cisco UCS E140D.

Note: All applications, except Cisco WAAS, running on the Cisco UCS E-Series in this profile used the external Ethernet interface on the module. Cisco WAAS took advantage of the internal back-plane connections of the Cisco ISR G2 and used these to intercept and redirect WAN traffic.

In this deployment, the number of cameras controlled by Cisco VSM was increased to 15, and streams from all 15 cameras were recorded on the Cisco UCS E140D. Simultaneous HTTP traffic of 2500 Mbps was constantly being optimized by the Cisco vWAAS application. Six point-of-sale registers were constantly active, accessing data from the point-of-sale server, and six video streams were constantly being played by the Cisco ECDS application to six client endpoints on the LAN. 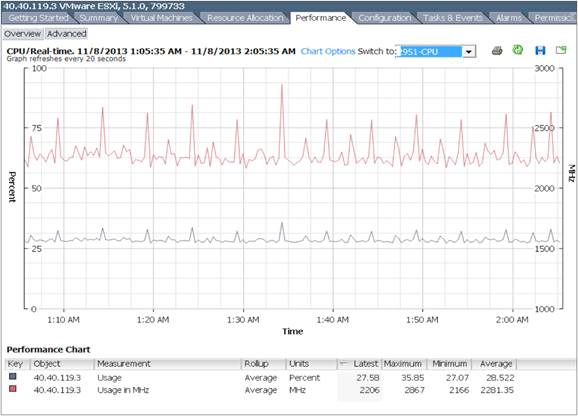 Note that the type of disk is an important factor in latency. SAS hard drives provide significant improvement, and SSDs perform the best. You should use one of these disk types if your application requires very low latency. Also note the RAID configuration. Generally, RAID 5 performance is lower than RAID 1 performance. The test scenarios used SATA HDDs and RAID 5. 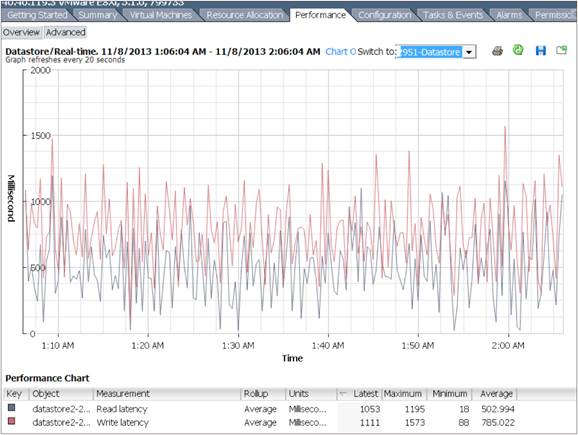 Note:    All applications, except Cisco WAAS, running on the Cisco UCS E-Series in this profile used the external Ethernet interface on the module. Cisco WAAS took advantage of the internal back-plane connections of the Cisco ISR G2 and used these to intercept and redirect WAN traffic.

The average CPU utilization was only 22 percent, and the peak utilization reached was only 26 percent, thus leaving significant room to add more applications (Figure 8). 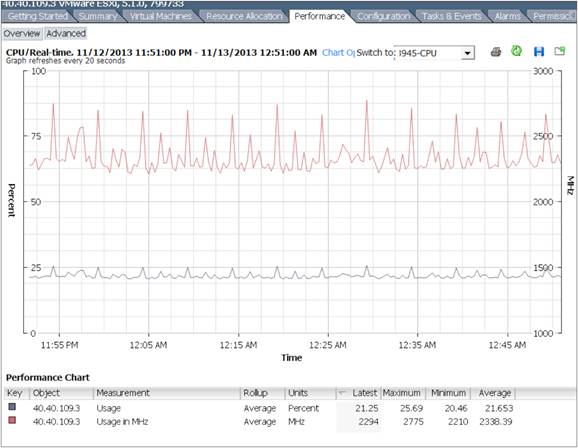 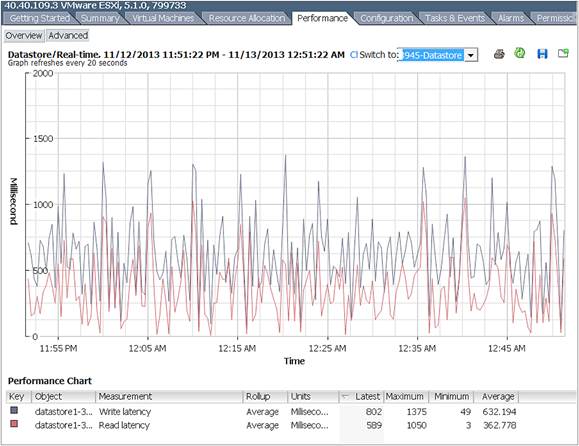 Even with significant workloads and applications, all three models of the Cisco UCS E-Series - Cisco UCS E140S, E140D, and E160D - were able to operate smoothly with relatively low CPU and memory utilization. On all models of the Cisco UCS E-Series, memory utilization was found to be low, in part because of the ample memory available on the blades for the various applications. However, as demonstrated in the medium-sized deployment profile, significant computing power is still available if a customer wants CPU or memory oversubscription to be enabled.

Using the test results, customers can determine the size of the computing blade they require. They should classify their applications into four categories - CPU access, memory access, read access, and write access - and use this document to understand the impact of their applications on the Cisco UCS E-Series and accordingly choose the right model, amount of memory, type of hard disk, and size of storage.

These tests show that these blades are capable of handling multiple commonly deployed applications for a wide variety of industry-specific use cases while not compromising performance.

For more information about the Cisco UCS E-Series, see http://www.cisco.com/go/ucse.