To use both mesh and non-mesh access points with a Cisco 3504, 5500 and 8500 Series Controller, only the base license is required from the 7.0 release and later releases. For more information about obtaining and installing licenses, see the Cisco Wireless LAN Controller Configuration Guide at http:/​/​www.cisco.com/​en/​US/​products/​ps10315/​products_​installation_​and_​configuration_​guides_​list.html.

Access points within a mesh network operate in one of the following two ways:

MAPs communicate among themselves and back to the RAP using wireless connections over the 802.11a/n/g radio backhaul. MAPs use the Cisco Adaptive Wireless Path Protocol (AWPP) to determine the best path through the other mesh access points to the controller.

Figure 1. Simple Mesh Network Hierarchy. This figure shows the relationship between RAPs and MAPs in a mesh network. 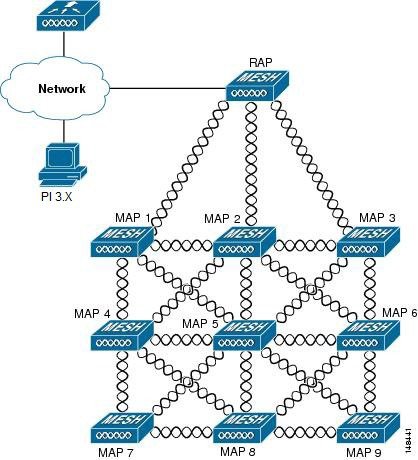 Access to the wireless LAN mesh for mesh access points is managed by the following authentication methods:

The following access point platforms are supported in this release:

Enterprise 11n/ac mesh is an enhancement added to the CUWN feature to work with the 802.11n/ac access points. Enterprise 11ac mesh features are compatible with non-802.11ac mesh but adds higher backhaul and client access speeds. The 802.11ac indoor access points are two-radio Wi-Fi infrastructure devices for select indoor deployments. One radio can be used for local (client) access for the access point and the other radio can be configured for wireless backhaul. If Universal Backhaul Access is enabled, the 5-GHz and 2.4–GHz radios in rel 8.2 can be used for local (client) access as well as a backhaul. Enterprise 11ac mesh supports P2P, P2MP, and mesh types of architectures.

Cisco 1500 series mesh access points are the core components of the wireless mesh deployment. AP1500s are configured by both the controller (GUI and CLI) and Cisco Prime Infrastructure. Communication between outdoor mesh access points (MAPs and RAPs) is over the 802.11a/n/ac radio backhaul. Client traffic is generally transmitted over the 802.11b/g/n radio (802.11a/n/ac can also be configured to accept client traffic).

The mesh access point can also operate as a relay node for other access points not directly connected to a wired network. Intelligent wireless routing is provided by the Adaptive Wireless Path Protocol (AWPP). This Cisco protocol enables each mesh access point to identify its neighbors and intelligently choose the optimal path to the wired network by calculating the cost of each path in terms9 of the signal strength and the number of hops required to get to a controller.

Uplinks support includes Gigabit Ethernet (1000BASE-T) and a small form-factor (SFP) slot that can be plugged for a fiber or cable modem interface. Both single mode and multimode SFPs up to 1000BASE-BX are supported. The cable modem can be DOCSIS 2.0 or DOCSIS/EuroDOCSIS 3.0 depending upon the type of mesh access point.

The mesh access points, can operate, apart from the mesh mode, in the following modes:

Both the 2.4-GHz and 5-GHz frequency bands are supported on the indoor and outdoor access points.

This band can now be used indoors and outdoors

When used outdoors, EIRP power in the upwards direction above 30 degrees is limited to 125 mW (20.9 dBm)

Only available in UK at 23 dBm for Indoor usage only

Previously, devices employing radar operated in frequency subbands without other competing services. However, controlling regulatory bodies are attempting to open and share these bands with new services like wireless mesh LANs (IEEE 802.11).

To protect existing radar services, the regulatory bodies require that devices wishing to share the newly opened frequency subband behave in accordance with the Dynamic Frequency Selection (DFS) protocol. DFS dictates that to be compliant, a radio device must be capable of detecting the presence of radar signals. When a radio detects a radar signal, it is required to stop transmitting to for at least 30 minutes to protect that service. The radio then selects a different channel to transmit on but only after monitoring it. If no radar is detected on the projected channel for at least one minute, then the new radio service device may begin transmissions on that channel.

The AP performs a DFS scan on the new DFS channel for 60 seconds. However, if a neighboring AP is already using that new DFS channel, the AP does not perform the DFS scan.

The process for a radio to detect and identify a radar signal is a complicated task that sometimes leads to incorrect detects. Incorrect radar detections can occur due to a large number of factors, including due to uncertainties of the RF environment and the ability of the access point to reliably detect actual on-channel radar. 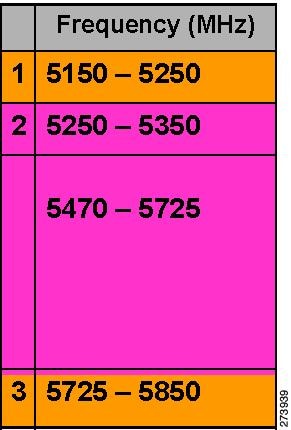 Antenna choice is a vital component of any wireless network deployment. There are two broad types of antennas:

Each type of antenna has a specific use and is most beneficial in specific types of deployments. Because antennas distribute RF signal in large lobed coverage areas determined by antenna design, successful coverage is heavily reliant on antenna choice.

A wide variety of antennas are available to provide flexibility when you deploy the mesh access points over various terrains.Refer to the applicable accesspoint data sheet or ordering guide for a list of supported antennas.

See the Cisco Aironet Antenna and Accessories Reference Guide on Cisco antennas and accessories at http:/​/​www.cisco.com/​en/​US/​prod/​collateral/​wireless/​ps7183/​ps469/​product_​data_​sheet09186a008008883b.html

The deployment and design, limitations and capabilities, and basic theories of antennas as well as installation scenarios, regulatory information, and technical specifications are addressed in detail.http:/​/​wwwin.cisco.com/​c/​cec/​prods-industry/​selling-en/​products/​wireless/​ap/​aironet-acc.html

You can use third-party antennas with AP1500s. However, note the following:

The Prime Infrastructure runs on a server platform with an embedded database, which provides scalability that allows hundreds of controllers and thousands of Cisco mesh access points to be managed. Controllers can be located on the same LAN as the Prime Infrastructure, on separate routed subnets, or across a wide-area connection.

CAPWAP Discovery on a Mesh Network

The process for CAPWAP discovery on a mesh network is as follows:

AWPP takes advantage of the CAPWAP WLAN, where client traffic is tunneled to the controller and is therefore hidden from the AWPP process. Also, the advance radio management features in the CAPWAP WLAN solution are available to the wireless mesh network and do not have to be built into AWPP.

AWPP enables a remote access point to dynamically find the best path back to a RAP for each MAP that is part of the RAP’s bridge group (BGN). Unlike traditional routing protocols, AWPP takes RF details into account.

To optimize the route, a MAP actively solicits neighbor MAP. During the solicitation, the MAP learns all of the available neighbors back to a RAP, determines which neighbor offers the best path, and then synchronizes with that neighbor. The path decisions of AWPP are based on the link quality and the number of hops.

AWPP automatically determines the best path back to the CAPWAP controller by calculating the cost of each path in terms of the signal strength and number of hops. After the path is established, AWPP continuously monitors conditions and changes routes to reflect changes in conditions. AWPP also performs a smoothing function to signal condition information to ensure that the ephemeral nature of RF environments does not impact network stability.

The traffic flow within the wireless mesh can be divided into three components:

Figure 1 shows an example of this type of framing. The source address of the frame is MAP:03:70, the destination address of this frame is the controller (the mesh network is operating in Layer 2 mode), the transmitter address is MAP:D5:60, and the receiver address is RAP:03:40.

Relationships among mesh access points are as a parent, child, or neighbor (see Figure 1).

Criteria to Choose the Best Parent

AWPP follows this process in selecting parents for a RAP or MAP with a radio backhaul:

This algorithm is run at startup and whenever a parent is lost and no other potential parent exists, and is usually followed by CAPWAP network and controller discovery. All neighbor protocol frames carry the channel information.

Parent maintenance occurs by the child node sending a directed NEIGHBOR_REQUEST to the parent and the parent responding with a NEIGHBOR_RESPONSE.

Parent optimization and refresh occurs by the child node sending a NEIGHBOR_REQUEST broadcast on the same channel on which its parent resides, and by evaluating all responses from neighboring nodes on the channel.

A parent mesh access point provides the best path back to a RAP. AWPP uses ease to determine the best path. Ease can be considered the opposite of cost, and the preferred path is the path with the higher ease.

Ease is calculated using the SNR and hop value of each neighbor, and applying a multiplier based on various SNR thresholds. The purpose of this multiplier is to apply a spreading function to the SNRs that reflects various link qualities.

Figure 1 shows the parent path selection where MAP2 prefers the path through MAP1 because the adjusted ease value (436906) though this path is greater then the ease value (262144) of the direct path from MAP2 to RAP.

A parent mesh access point is chosen by using the adjusted ease, which is the ease of each neighbor divided by the number of hops to the RAP:

One of the challenges in WLAN routing is the ephemeral nature of RF, which must be considered when analyzing an optimal path and deciding when a change in path is required. The SNR on a given RF link can change substantially from moment to moment, and changing route paths based on these fluctuations results in an unstable network, with severely degraded performance. To effectively capture the underlying SNR but remove moment-to-moment fluctuations, a smoothing function is applied that provides an adjusted SNR.

In evaluating potential neighbors against the current parent, the parent is given 20 percent of bonus-ease on top of the parent's calculated ease, to reduce the ping-pong effect between parents. A potential parent must be significantly better for a child to make a switch. Parent switching is transparent to CAPWAP and other higher-layer functions.

To ensure that routing loops are not created, AWPP discards any route that contains its own MAC address. That is, routing information apart from hop information contains the MAC address of each hop to the RAP; therefore, a mesh access point can easily detect and discard routes that loop.