The Cisco TrustSec security architecture builds secure networks by establishing domains of trusted network devices. Each device in the domain is authenticated by its peers. Communication on the links between devices in the domain is secured with a combination of encryption, message integrity check, and data-path replay protection mechanisms. Cisco TrustSec uses the device and user credentials acquired during authentication for classifying the packets by security groups (SGs) as they enter the network. This packet classification is maintained by tagging packets on ingress to the Cisco TrustSec network so that they can be properly identified for the purpose of applying security and other policy criteria along the data path. The tag, called the security group tag (SGT), allows the network to enforce the access control policy by enabling the endpoint device to act upon the SGT to filter traffic.

Cisco TrustSec IEEE 802.1X links are not supported on platforms supported in the Cisco IOS XE Denali and Everest releases, and hence only the Authenticator is supported; the Supplicant is not supported. 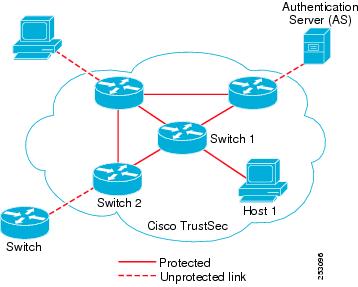 Each participant in the Cisco TrustSec authentication process acts in one of the following roles:

When the link between a supplicant and an authenticator first comes up, the following sequence of events typically occurs:

Security Association Protocol (SAP) negotiation—When both sides of a link support encryption, the supplicant and the authenticator negotiate the necessary parameters to establish a security association (SA).

When all three steps are complete, the authenticator changes the state of the link from the unauthorized (blocking) state to the authorized state, and the supplicant becomes a member of the Cisco TrustSec domain. 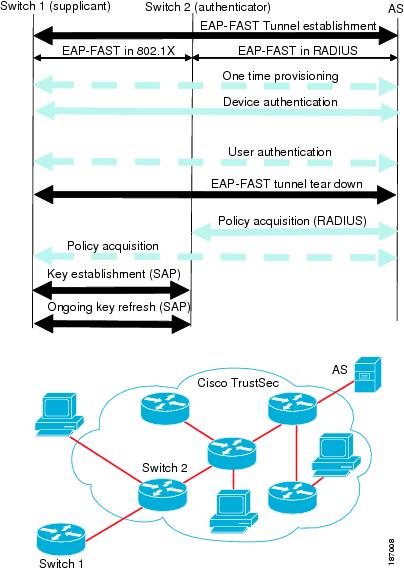 The implementation of EAP-FAST for Cisco TrustSec has the following enhancements:

At the end of the Cisco TrustSec authentication process, both the authenticator and the supplicant know the following:

Cisco TrustSec does not require a specific type of user credential for endpoint devices. You can choose any type of user authentication method that is supported by the authentication server, and use the corresponding credentials. For example, the Cisco Secure Access Control System (ACS) version 5.1 supports MSCHAPv2, generic token card (GTC), or RSA one-time password (OTP).

Once a device is authenticated, Cisco TrustSec tags any packet that originates from that device with a security group tag (SGT) that contains the security group number of the device. The packet carries this SGT throughout the network within the Cisco TrustSec header. The SGT is a single label that determines the privileges of the source within the entire enterprise.

Figure 1-3 shows an example of a Cisco TrustSec permissions matrix for a simple domain with three defined user roles and one defined destination resource. Three SGACL policies control access to the destination server based on the role of the user.

Using role-based permissions greatly reduces the size of ACLs and simplifies their maintenance. With Cisco TrustSec, the number of access control entries (ACEs) configured is determined by the number of permissions specified, resulting in a much smaller number of ACEs than in a traditional IP network. The use of SGACLs in Cisco TrustSec typically results in a more efficient use of TCAM resources compared with traditional ACLs.

Cisco TrustSec access control is implemented using ingress tagging and egress enforcement. At the ingress point to the Cisco TrustSec domain, traffic from the source is tagged with an SGT containing the security group number of the source entity. The SGT is propagated with the traffic across the domain. At the egress point of the Cisco TrustSec domain, an egress device uses the source SGT and the security group number of the destination entity (the destination SG, or DGT) to determine which access policy to apply from the SGACL policy matrix.

Figure 1-4 shows how the SGT assignment and the SGACL enforcement operate in a Cisco TrustSec domain.

The Cisco TrustSec egress switch enforces the SGACL policy that applies to source group 3 and destination group 4, the security group number assigned by the authentication server for the web server.

The network device can determine the SGT for a packet in one of the following methods:

In some cases, ingress devices or other non-egress devices might have destination group information available. In those cases, SGACLs might be applied in these devices rather than egress devices.

SGACL enforcement is applied only on IP traffic, but enforcement can be applied to either routed or switched traffic.

When logging is enabled in SGACL, the switch logs the following information:

The log option applies to individual ACEs and causes packets that match the ACE to be logged. The first packet logged by the log keyword generates a syslog message. Subsequent log messages are generated and reported at five-minute intervals. If the logging-enabled ACE matches another packet (with characteristics identical to the packet that generated the log message), the number of matched packets is incremented (counters) and then reported.

To enable logging, use the  log  keyword in front of the ACE definition in the SGACL configuration.  For example, permit ip log.

The following is a sample log, displaying source and destination SGTs, ACE matches (for a permit or deny action), and the protocol, that is, TCP, UDP, IGMP, and ICMP information:

In addition to the existing ‘per cell’ SGACL statistics, which can be displayed using the show cts role-based counters command, you can also display ACE statistics, by using the show ip access-list sgacl_name command. No additional configuration is required for this.

The following example shows how you can use the show ip access-list command to display the ACE count:

During the pre-deployment phase of Cisco TrustSec, an administrator will use the monitor mode to test the security policies without enforcing them to make sure that the policies function as intended. If the security policies do not function as intended, the monitor mode provides a convenient mechanism for identifying that and provides an opportunity to correct the policy before enabling SGACL enforcement. This enables administrators to have increased visibility to the outcome of the policy actions before they enforce it, and confirm that the subject policy meets the security requirements (access is denied to resources if users are not authorized).

The monitoring capability is provided at the SGT-DGT pair level. When you enable the SGACL monitoring mode feature, the deny action is implemented as an ACL permit on the line cards. This allows the SGACL counters and logging to display how connections are handled by the SGACL policy. Since all the monitored traffic is permitted, there is no disruption of service due to SGACLs while in the SGACL monitor mode.

The NDAC and SAP negotiation process is shown in Figure 1-5.

The device uses RADIUS to acquire the following environment data from the authentication server:

When both sides of a link support 802.1AE Media Access Control Security (MACsec), a security association protocol (SAP) negotiation is performed. An EAPOL-Key exchange occurs between the supplicant and the authenticator to negotiate a cipher suite, exchange security parameters, and manage keys. Successful completion of all three tasks results in the establishment of a security association (SA).

Depending on your software version, crypto licensing, and link hardware support, SAP negotiation can use one of the following modes of operation:

All modes except No Encapsulation require Cisco TrustSec-capable hardware. 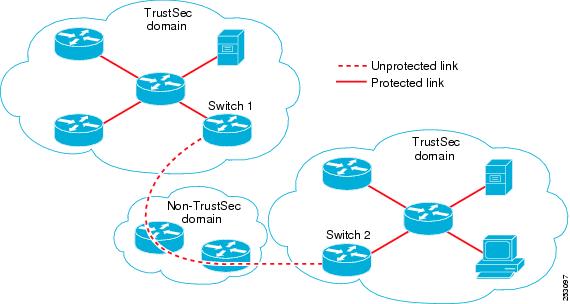 To support Cisco TrustSec Layer 3 SGT Transport, any device that will act as a Cisco TrustSec ingress or egress Layer 3 gateway must maintain a traffic policy database that lists eligible subnets in remote Cisco TrustSec domains as well as any excluded subnets within those regions. You can configure this database manually on each device if they cannot be downloaded automatically from the Cisco Secure ACS.

Cisco TrustSec does not encrypt the Layer 3 SGT Transport encapsulated packets. To protect the packets traversing the non-TrustSec domain, you can configure other protection methods, such as IPsec.

A Catalyst 6500 series switch in a Cisco TrustSec domain may contain any of these types of switching modules:

For further discussion of the Cisco TrustSec Reflector feature and a list of supported hardware, see the document, “ Cisco Catalyst 6500 Series with Supervisor Engine 2T: Enabling Cisco TrustSec with Investment Protection, ” at the following URL:

The following conditions must be met before the Cisco TrustSec ingress reflector configuration is accepted:

The following conditions must be met before the Cisco TrustSec egress reflector configuration is accepted:

The SXP implementation of Virtual Routing and Forwarding (VRF) binds an SXP connection with a specific VRF. It is assumed that the network topology is correctly configured for Layer 2 or Layer 3 VPNs, with all VRFs configured before enabling Cisco TrustSec.

SXP VRF support can be summarized as follows:

The VRF assignments configured by the cts role-based l2-vrf command are active as long as a VLAN remains a Layer 2 VLAN. The IP–SGT bindings learned while a VRF assignment is active are also added to the Forwarding Information Base (FIB) table associated with the VRF and the IP protocol version. If an SVI becomes active for a VLAN, the VRF to VLAN assignment becomes inactive and all the bindings learned on the VLAN are moved to the FIB table associated with the SVI’s VRF.