Prerequisites for the Optional Spanning-Tree Features

Restrictions for the Optional Spanning-Tree Features

You can configure the UplinkFast or the BackboneFast feature for rapid PVST+ or for the MSTP, but the feature remains disabled (inactive) until you change the spanning-tree mode to PVST+.

PortFast immediately brings an interface configured as an access or trunk port to the forwarding state from a blocking state, bypassing the listening and learning states. You can use PortFast on interfaces connected to a single workstation or server, as shown in Figure 22-1, to allow those devices to immediately connect to the network, rather than waiting for the spanning tree to converge.

Interfaces connected to a single workstation or server should not receive bridge protocol data units (BPDUs). An interface with PortFast enabled goes through the normal cycle of spanning-tree status changes when the switch is restarted.

Because the purpose of PortFast is to minimize the time interfaces must wait for spanning-tree to converge, it is effective only when used on interfaces connected to end stations. If you enable PortFast on an interface connecting to another switch, you risk creating a spanning-tree loop. 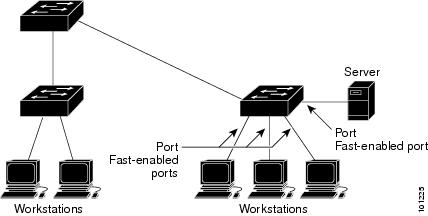 The BPDU guard feature can be globally enabled on the switch or can be enabled per port, but the feature operates with some differences.

To prevent the port from shutting down, you can use the errdisable detect cause bpduguard shutdown vlan global configuration command to shut down just the offending VLAN on the port where the violation occurred.

At the interface level, you enable BPDU guard on any port by using the spanning-tree bpduguard enable interface configuration command w ithout also enabling the PortFast feature. When the port receives a BPDU, it is put in the error-disabled state.

The BPDU filtering feature can be globally enabled on the switch or can be enabled per interface, but the feature operates with some differences.

At the interface level, you can enable BPDU filtering on any interface by using the spanning-tree bpdufilter enable interface configuration command w ithout also enabling the PortFast feature. This command prevents the interface from sending or receiving BPDUs.

Enabling BPDU filtering on an interface is the same as disabling spanning tree on it and can result in spanning-tree loops.

You can enable the BPDU filtering feature for the entire switch or for an interface.

Figure 22-2 Switches in a Hierarchical Network 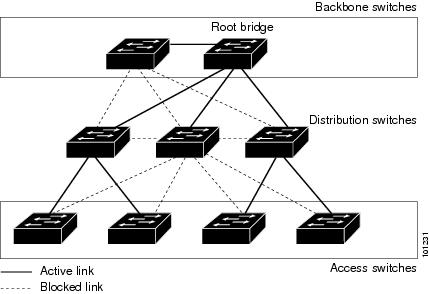 If a switch loses connectivity, it begins using the alternate paths as soon as the spanning tree selects a new root port. By enabling UplinkFast with the spanning-tree uplinkfast global configuration command, you can accelerate the choice of a new root port when a link or switch fails or when the spanning tree reconfigures itself. The root port transitions to the forwarding state immediately without going through the listening and learning states, as it would with the normal spanning-tree procedures.

When the spanning tree reconfigures the new root port, other interfaces flood the network with multicast packets, one for each address that was learned on the interface. You can limit these bursts of multicast traffic by reducing the max-update-rate parameter (the default for this parameter is 150 packets per second). However, if you enter zero, station-learning frames are not generated, so the spanning-tree topology converges more slowly after a loss of connectivity.

UplinkFast is most useful in wiring-closet switches at the access or edge of the network. It is not appropriate for backbone devices. This feature might not be useful for other types of applications. 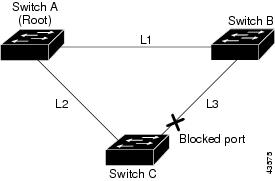 If Switch C detects a link failure on the currently active link L2 on the root port (a direct link failure), UplinkFast unblocks the blocked interface on Switch C and transitions it to the forwarding state without going through the listening and learning states, as shown in Figure 22-4. This change takes approximately 1 to 5 seconds.

BackboneFast detects indirect failures in the core of the backbone. BackboneFast is a complementary technology to the UplinkFast feature, which responds to failures on links directly connected to access switches. BackboneFast optimizes the maximum-age timer, which controls the amount of time the switch stores protocol information received on an interface. When a switch receives an inferior BPDU from the designated port of another switch, the BPDU is a signal that the other switch might have lost its path to the root, and BackboneFast tries to find an alternate path to the root. 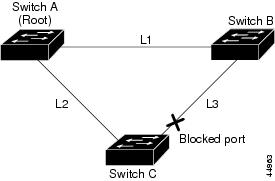 If link L1 fails as shown in Figure 22-6, Switch C cannot detect this failure because it is not connected directly to link L1. However, because Switch B is directly connected to the root switch over L1, it detects the failure, elects itself the root, and begins sending BPDUs to Switch C, identifying itself as the root. When Switch C receives the inferior BPDUs from Switch B, Switch C assumes that an indirect failure has occurred. At that point, BackboneFast allows the blocked interface on Switch C to move immediately to the listening state without waiting for the maximum aging time for the interface to expire. BackboneFast then transitions the Layer 2 interface on Switch C to the forwarding state, providing a path from Switch B to Switch A. The root-switch election takes approximately 30 seconds, twice the Forward Delay time if the default Forward Delay time of 15 seconds is set. Figure 22-6 shows how BackboneFast reconfigures the topology to account for the failure of link L1.

Figure 22-7 Adding a Switch in a Shared-Medium Topology 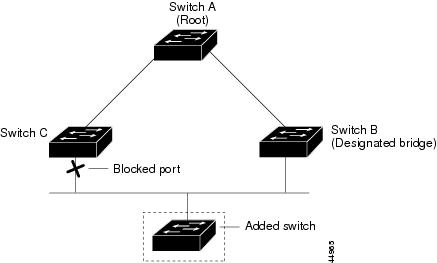 If the switch detects a misconfiguration on the other device, EtherChannel guard places the switch interfaces in the error-disabled state, and displays an error message.

You can enable this feature by using the spanning-tree etherchannel guard misconfig global configuration command.

The Layer 2 network of a service provider (SP) can include many connections to switches that are not owned by the SP. In such a topology, the spanning tree can reconfigure itself and select a customer switch as the root switch, as shown in Figure 22-8. You can avoid this situation by enabling root guard on SP switch interfaces that connect to switches in your customer’s network. If spanning-tree calculations cause an interface in the customer network to be selected as the root port, root guard then places the interface in the root-inconsistent (blocked) state to prevent the customer’s switch from becoming the root switch or being in the path to the root.

If a switch outside the SP network becomes the root switch, the interface is blocked (root-inconsistent state), and spanning tree selects a new root switch. The customer’s switch does not become the root switch and is not in the path to the root.

If the switch is operating in multiple spanning-tree (MST) mode, root guard forces the interface to be a designated port. If a boundary port is blocked in an internal spanning-tree (IST) instance because of root guard, the interface also is blocked in all MST instances. A boundary port is an interface that connects to a LAN, the designated switch of which is either an IEEE 802.1D switch or a switch with a different MST region configuration.

Root guard enabled on an interface applies to all the VLANs to which the interface belongs. VLANs can be grouped and mapped to an MST instance.

You can enable this feature by using the spanning-tree guard root interface configuration command.

Misuse of the root guard feature can cause a loss of connectivity. 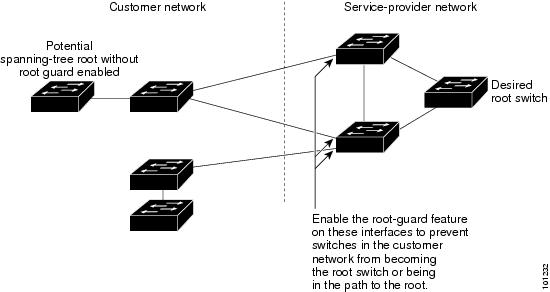 You can enable this feature by using the spanning-tree loopguard default global configuration command.

When the switch is operating in PVST+ or rapid-PVST+ mode, loop guard prevents alternate and root ports from becoming designated ports, and spanning tree does not send BPDUs on root or alternate ports.

How to Configure the Optional Spanning-Tree Features