This publication describes how to install and verify the operation of the Catalyst 4500 series switch Supervisor Engine II-Plus. Refer to the software configuration guide for your switch to obtain configuration information for the supervisor engines and switching modules.

This document contains these sections:

Throughout this publication, safety warnings appear in procedures that may harm you if performed incorrectly. A warning symbol precedes each warning statement.

The supervisor engine includes interfaces for SNMP, console, and Telnet, and provides management functions, such as environmental status monitoring.

The following sections describe the LEDs, connectors, and switches on the Catalyst 4500 series Supervisor Engine II-Plus:

Table 1 describes the LEDs on the supervisor engine front panel.

The Ethernet management port can be used (in ROMMON mode only) to recover a switch software image that has been corrupted or destroyed due to a network catastrophe. When using Cisco IOS Release 12.2(50)SG or later, this port can also perform the same functions as the console port. For earlier Cisco IOS software releases, this port is not active while the switch is operating normally.

The Catalyst 4500 series Supervisor Engine II-Plus console port has an EIA/TIA-232 RJ-45 connector. The console port allows you to perform the following functions:

Configure the switch from the CLI

EIA/TIA-232 was known as recommended standard RS-232 before its acceptance as a standard by the Electronic Industries Alliance (EIA) and Telecommunications Industry Association (TIA).

The Reset button is used to restart the switch.

Use a paper clip or other small, pointed object to press the Reset button.

The Flash port accepts a Type 1 compact Flash card. You can use it for file transfer tasks such as loading a new software image. The Flash card (MEM-C4K-FLD64M= or MEM-C4K-FLD128M=) is optional.

For more information, refer to Using the Compact Flash on the Catalyst 4000 Family Supervisor Engine III and IV at the following URL:


Table 4 provides cabling specifications for the GBICs that you install in the Gigabit Ethernet port modules. All GBIC ports have SC-type connectors, and the minimum cable distance for all GBICs listed is 6.5 feet (2 meters).

When using the LX/LH GBIC with 62.5-micron diameter MMF, you must install a mode-conditioning patch cord (Cisco product number CAB-GELX-625 or equivalent) between the GBIC and the MMF cable on both the transmit and receive ends of the link.

The patch cord is required for link distances greater than 984 feet (300 meters) and must comply with IEEE standards. The IEEE found that link distances could not be met with certain types of fiber-optic cable due to a problem in the center of some fiber-optic cable cores. The solution is to launch light from the laser at a precise offset from the center by using the patch cord. At the output of the patch cord, the LX/LH GBIC is compliant with the IEEE 802.3z standard for 1000BASE-LX. For a detailed description of this problem, refer to the installation guide for your switch.

We do not recommend using the LX/LH GBIC with MMF without a patch cord for very short link distances (tens of meters). The result could be an elevated bit error rate (BER).

Cisco Gigabit Ethernet products have been tested and evaluated to comply with the standards listed in Appendix A, "Specifications," of the installation guide for your switch. All equivalent cables should also meet these standards.

All Catalyst 4500 series switches support hot swapping, which lets you install, remove, replace, and rearrange supervisor engines and switching modules without powering off the system. When the system detects that a switching module has been installed or removed, it runs diagnostic and discovery routines automatically, acknowledges the presence or absence of the module, and resumes system operation with no operator intervention.

You will need these tools to install a supervisor engine in a Catalyst 4500 series switch:

Wrist strap or other grounding device

Whenever you handle supervisor engines, use a wrist strap or other grounding device to prevent ESD damage.

To prevent ESD damage, handle supervisor engines by the carrier edges only.

To install a supervisor engine in a Catalyst 4500 series switch, follow this procedure:

Ensure that you have enough clearance to accommodate any interface equipment that you will connect directly to the supervisor engine ports.

Loosen the captive installation screws that secure the switching-module filler plate or the existing supervisor engine (whichever is present), and remove it.

To install the new supervisor engine, grasp the switching module front panel with one hand and place your other hand under the carrier to support the supervisor engine, as shown in Figure 2. Do not touch the printed circuit boards or connector pins.

Align the edges of the supervisor engine carrier with the slot guides on the sides of the switch chassis, as shown in Figure 2.

Figure 2 Installing the Supervisor Engine in the Chassis Pivot the two module ejector levers out and away from the faceplate.

Carefully slide the supervisor engine into the slot until the notches on both ejector levers engage the chassis sides.

Using the thumb and forefinger of each hand, simultaneously pivot in both ejector levers to fully seat the supervisor engine in the backplane connector.

Use a screwdriver to tighten the captive installation screws on each end of the supervisor engine faceplate.

To check the status of the module, perform these steps:

Ensure that the LED labeled Status is green (module operational).

When the switch is online, enter the show module command. Verify that the system acknowledges the new module and that the module status is good.

To prevent ESD damage, handle supervisor engines by the carrier edges only.

To remove a supervisor engine from a Catalyst 4500 series switch, perform these steps:

Disconnect any network interface cables attached to the ports on the supervisor engine that you intend to remove.

Grasp the front panel of the supervisor engine with one hand, and place your other hand under the carrier to support and guide it out of the slot. Do not touch the printed circuit boards or connector pins.

Carefully pull the supervisor engine straight out of the slot, keeping your other hand under the carrier to guide it.

Place the supervisor engine on an antistatic mat or antistatic foam, or immediately install it in another slot.

Figure 4 and Figure 5 show the connector types used to attach interface cables to the supervisor engine.

Always keep caps and plugs on the fiber-optic connectors on the cable and the switch when they are not in use. 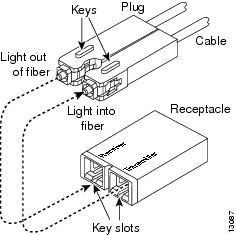 For information and commands to configure your supervisor engine, refer to the Software Configuration Guide for your switch.

Because of interoperability issues, Cisco does not support GBICs purchased from third-party vendors.

Cisco 1000BASE-LX/LH interfaces fully comply with the IEEE 802.3z 1000BASE-LX standard. However, their higher optical quality allows them to reach 10 km over SMF cable instead of the 5 km specified in the standard.

If an LX/LH GBIC designed for operation on an SMF cable is directly coupled to an MMF cable, an effect known as Differential Mode Delay (DMD) might occur. See the Catalyst 4000 Family Module Installation Guide for more information.

This section describes the following topics:

A supervisor engine can be shipped with or without GBICs installed.

Unnecessary removal or insertion of a GBIC can lead to premature failure of the GBIC. A GBIC has a lifetime of 100 to 500 removals and insertions.

This product has been evaluated to and complies with acceptable-safety-emission limits for Class 1 lasers. However, you should still take general precautions when working with lasers.

Remove the GBIC from its protective packaging.

Verify that the GBIC is the correct type for your network by checking the GBIC part number. The part number indicates whether it is 1000BASE-SX, 1000BASE-LX/LH, 1000BASE-T, CWDM, or 1000BASE-ZX.

Grasp the sides of the GBIC with your thumb and forefinger; insert the GBIC into the desired slot on the front of the module. (See Figure 7.)

GBICs are keyed to prevent incorrect insertion into a slot.

When you are ready to attach the fiber-optic cable, remove the plug from the GBIC and save it for future use.

Remove the plugs from the SC-type connector on the fiber-optic cable (see Figure 5 on page 14). Insert the connector into the GBIC.

If you are using the LX/LH GBIC with MMF, you need to install a patch cord between the GBIC and the MMF cable. See the "Using a Patch Cord" section for details.

Disconnect the fiber-optic cable from the GBIC SC-type connector.

Release the GBIC from the slot by simultaneously squeezing the plastic tabs (one on each side of the GBIC).

Slide the GBIC out of the slot.

Install the two plugs into the GBIC optical bores, and place the GBIC in its protective packaging.

GBICs are sensitive to dust. When the GBIC is stored or when a fiber-optic cable is not plugged in, always keep plugs in the optical bores.

When installed in a system, the Catalyst 4500 series modules comply with the standards listed in Table 5:

For more detailed installation and configuration information, refer to the following:

Regulatory Compliance and Safety Information for the Catalyst 4500 Series Switches