For complete environmental specifications, including airflow requirements, refer to Appendix A, “Specifications,” in the Catalyst 4500 Series Installation Guide. The guide is available online at http://www.cisco.com/en/US/docs/switches/lan/catalyst4500/hardware/installation/guide/78-14409-08/4500inst.html 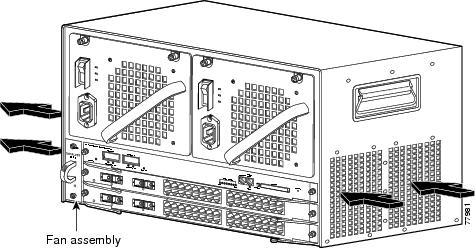 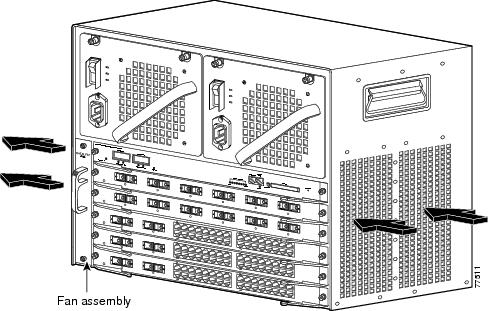 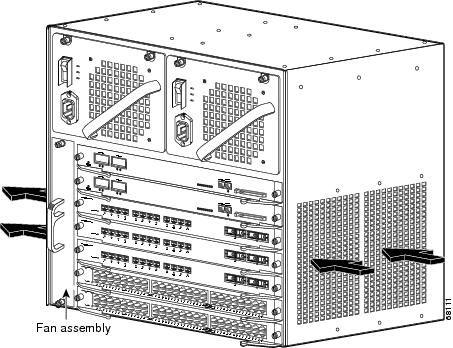 You will need a Phillips screwdriver for the following two procedures. 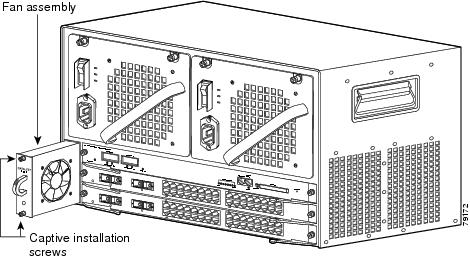 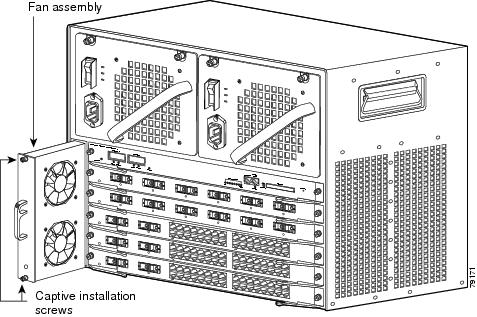 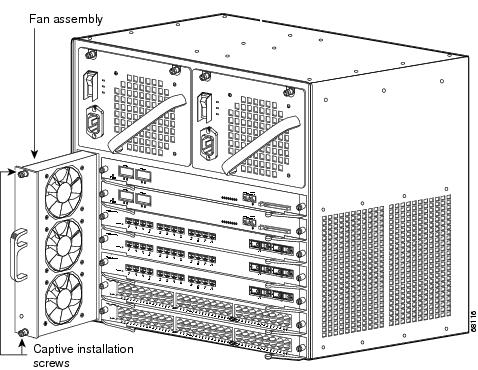 When changing fan assemblies, try to keep changeover times to under a minute. Never operate the system for an extended period if the fan assembly is removed or if it is not functioning properly. An overtemperature condition can cause severe equipment damage or an unscheduled system shutdown.

Follow these steps to remove the existing chassis fan assembly:

Loosen the two captive installation screws on the fan assembly by turning them counterclockwise.

Grasp the fan assembly with both hands and pull it outward; wiggle it if necessary to unseat it from the backplane. Slide it out of the chassis and put it someplace where it will not be dropped or stepped on.

Follow these steps to install the new fan assembly:

Hold the fan assembly with the fans facing to the right.

Slide the fan assembly into the chassis until the two captive installation screws make contact with the chassis.

Using a screwdriver, tighten the two captive installation screws by turning them clockwise.

To check the operation of the fans, you need to power up the chassis.

Follow these steps to verify that the new fan assembly was installed correctly:

Listen for the fans; you should immediately hear them operating. If you do not hear them, ensure that the fan assembly is inserted completely in the chassis and that the faceplate is flush with the switch back panel.

If after several attempts the fans do not operate, or if you experience trouble with the installation (for instance, if the captive installation screws do not align with the chassis holes), contact the Cisco Technical Assistance Center (TAC) for assistance.

For other installation and configuration information, refer to this publication:

Subscribe to the What’s New in Cisco Product Documentation as a Really Simple Syndication (RSS) feed and set content to be delivered directly to your desktop using a reader application. The RSS feeds are a free service and Cisco currently supports RSS version 2.0.

All other trademarks mentioned in this document or website are the property of their respective owners. The use of the word partner does not imply a partnership relationship between Cisco and any other company. (0812R)