NSF-awareness—If neighboring router devices detect that an NSF router can still forward packets when a supervisor engine switchover happens, this capability is referred to as NSF-awareness. Cisco IOS enhancements to the Layer 3 routing protocols (OSPF, BGP, and EIGRP) are designed to prevent route-flapping so that the CEF routing table does not time out or the NSF router does not drop routes. An NSF-aware router helps to send routing protocol information to the neighboring NSF router.

NSF-capability—NSF works with SSO to minimize the amount of time that a Layer 3 network is unavailable following a supervisor engine switchover by continuing to forward IP packets. Reconvergence of Layer 3 routing protocols (BGP, EIGRP,and OSPF v2) is transparent to the user and happens automatically in the background. The routing protocols recover routing information from neighbor devices and rebuild the Cisco Express Forwarding (CEF) table.

NSF does not support IPv6 and is IPv4 Unicast only.

A typical topology for NSF and NSF-aware routers is given below. 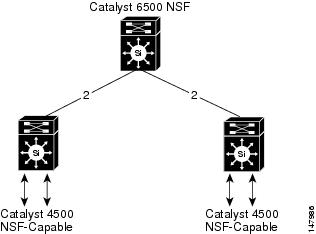 Catalyst 4500 series switches support fault resistance by allowing a standby supervisor engine to take over if the active supervisor engine fails. NSF works with SSO to minimize the amount of time a network is unavailable to its users following a switchover.

NSF continues forwarding network traffic and application state information so that user session information is maintained after a switchover.

Network stability may be improved with the reduction in the number of route flaps, which were created when routers in the network failed and lost their routing tables.

Neighboring routers do not detect a link flap

Because the interfaces remain up during a switchover, neighboring routers do not detect a link flap (the link does not go down and come back up).

Because SSO continues forwarding network traffic during a switchover, routing flaps are avoided.

Maintains user sessions established prior to the switchover

Be aware that you can use the [no] service slave-log configuration command to forward all error messages from the standby supervisor engine to the active engine. By default, this capability is enabled.

NSF always runs with SSO and provides redundancy for Layer 3 traffic. NSF is supported by the BGP, OSPF, and EIGRP routing protocols and is supported by Cisco Express Forwarding (CEF) for forwarding. The routing protocols have been enhanced with NSF-capability and awareness, which means that routers running these protocols can detect a switchover and take the necessary actions to continue forwarding network traffic and to recover route information from the peer devices.

As the routing protocols start to repopulate the RIB on a prefix-by-prefix basis, the updates cause prefix-by-prefix updates to CEF, which it uses to update the FIB and adjacency databases. Existing and new entries receive the new version ("epoch") number, indicating that they have been refreshed. The forwarding information is updated on the forwarding engine during convergence. The supervisor engine signals when the RIB has converged. The software removes all FIB and adjacency entries that have an epoch older than the current switchover epoch. The FIB now represents the newest routing protocol forwarding information.

Use of the routing protocols require the Enterprise Services (entservices) level of Cisco IOS-XE Software for the Catalyst 4500 series switch. EIGRP-stub and OSPF for routed access are supported on IP Base level of Cisco IOS XE.

If the BGP session is lost during the supervisor engine switchover, the NSF-aware BGP peer marks all the routes associated with the NSF-capable router as stale; however, it continues to use these routes to make forwarding decisions for a set period of time. This functionality prevents packets from being lost while the newly active supervisor engine is waiting for convergence of the routing information with the BGP peers.

When an OSPF NSF-capable router performs a supervisor engine switchover, it must perform the following tasks in order to resynchronize its link state database with its OSPF neighbors:

Reacquire the contents of the link state database for the network

As quickly as possible after a supervisor engine switchover, the NSF-capable router sends an OSPF NSF signal to neighboring NSF-aware devices. Neighbor networking devices recognize this signal as an indicator that the neighbor relationship with this router should not be reset. As the NSF-capable router receives signals from other routers on the network, it can begin to rebuild its neighbor list.

When an EIGRP NSF-capable router initially re-boots after an NSF restart, it has no neighbor and its topology table is empty. The router is notified by the standby (now active) supervisor engine when it needs to bring up the interfaces, reacquire neighbors, and rebuild the topology and routing tables. The restarting router and its peers must accomplish these tasks without interrupting the data traffic directed toward the restarting router. EIGRP peer routers maintain the routes learned from the restarting router and continue forwarding traffic through the NSF restart process.

To prevent an adjacency reset by the neighbors, the restarting router uses a new Restart (RS) bit in the EIGRP packet header to indicate a restart. The RS bit is set in the hello packets and in the initial INIT update packets during the NSF restart period. The RS bit in the hello packets allows the neighbors to be quickly notified of the NSF restart. Without seeing the RS bit, the neighbor can only detect an adjacency reset by receiving an INIT update or by the expiration of the hello hold timer. Without the RS bit, a neighbor does not know if the adjacency reset should be handled using NSF or the normal startup method.

A router may be NSF-aware but may not be helping the NSF restarting neighbor because booting from a cold start.

When the restarting router has received all EOT indications from its neighbors or when the NSF converge timer expires, EIGRP notifies the RIB of convergence. EIGRP waits for the RIB convergence signal and then floods its topology table to all awaiting NSF-aware peers.

NSF with SSO has these restrictions:

For NSF operation, you must have SSO configured on the device.

NSF with SSO supports IP Version 4 traffic and protocols only; NSF with SSO does not support IPv6 traffic.

The Virtual Redundancy Routing Protocols (VRRP) is not SSO-aware, meaning state information is not maintained between the active and standby supervisor engine during normal operation. VRRP and SSO can coexist but both features work independently. Traffic that relies on VRRP may switch to the VRRP standby in the event of a supervisor engine switchover.

All neighboring devices participating in BGP NSF must be NSF-capable and configured for BGP graceful restart.

OSPF NSF for virtual links is not supported.

All OSPF networking devices on the same network segment must be NSF-aware (running an NSF software image).

For IETF, all neighboring devices must be running an NSF-aware software image.

The following sections describe the configuration tasks for the NSF feature:

The sso keyword is not supported if the IOS-XE software is running in LAN Base level.

This example shows how to configure the system for SSO and display the redundancy state:

The CEF NSF feature operates by default while the networking device is running in SSO mode. No configuration is necessary.

To verify that CEF is NSF-capable, enter the show cef state command:

You must configure BGP graceful restart on all peer devices participating in BGP NSF.

To configure BGP for NSF, perform this task (repeat this procedure on each of the BGP NSF peer devices):

To verify BGP NSF, you must check that BGP graceful restart is configured on the SSO-enabled networking device and on the neighbor devices. To verify, follow these steps:

Verify that "bgp graceful-restart" appears in the BGP configuration of the SSO-enabled switch by entering the show running-config command:

Repeat Step 1 on each of the BGP neighbors.

All peer devices participating in OSPF NSF must be made OSPF NSF-aware, which happens automatically when you install an NSF software image on the device.

Verify that `nsf' appears in the OSPF configuration of the SSO-enabled device by entering the show running-config command:

Enter the show ip ospf command to verify that NSF is enabled on the device:

Verify that "nsf" appears in the EIGRP configuration of the SSO-enabled device by entering the
show running-config command:

Enter the show ip protocols command to verify that NSF is enabled on the device:

This section provides a list of High Availability software features that are supported in Cisco IOS XE 3.1.0SG. Links to the feature documentation are included.

For details on Cisco High Availability, refer to the following URL: