The DHCP server assigns IP addresses from specified address pools on a switch or router to DHCP clients and manages them. If the DHCP server cannot give the DHCP client the requested configuration parameters from its database, it forwards the request to one or more secondary DHCP servers defined by the network administrator. The switch can act as a DHCP server.

The following illustration shows a metropolitan Ethernet network in which a centralized DHCP server assigns IP addresses to subscribers connected to the switch at the access layer. Because the DHCP clients and their associated DHCP server do not reside on the same IP network or subnet, a DHCP relay agent (the Catalyst switch) is configured with a helper address to enable broadcast forwarding and to transfer DHCP messages between the clients and the server. 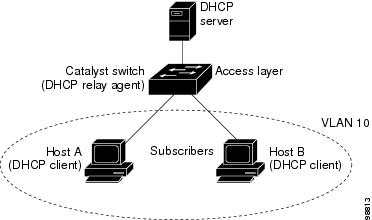 When you enable the DHCP snooping information option 82 on the switch, the following sequence of events occurs:

In the default suboption configuration, when the described sequence of events occurs, the values in these fields do not change (see the illustration,Suboption Packet Formats): 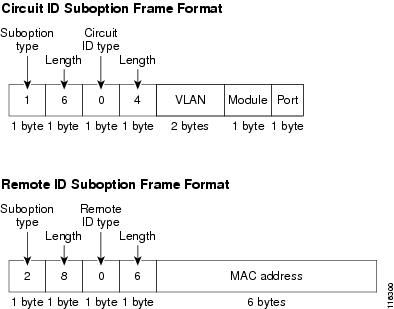 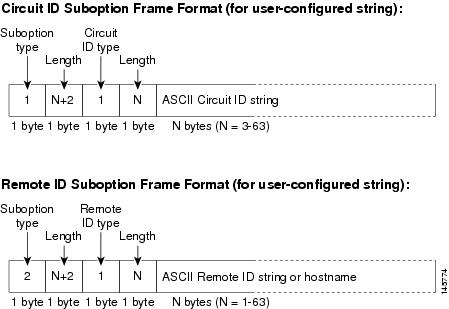 When DHCP snooping is enabled, the switch uses the DHCP snooping binding database to store information about untrusted interfaces. The database can have up to 64,000 bindings.

How to Configure DHCP Features

The switch can act as a DHCP server.

For procedures to configure the switch as a DHCP server, see the “Configuring DHCP” section of the “IP addressing and Services” section of the Cisco IOS IP Configuration Guide, Release 12.4.

Follow these steps to enable the DHCP relay agent on the switch:

The prerequisites for DHCP Snooping and Option 82 are as follows:

Follow these steps to enable DHCP snooping on the switch:

Follow these steps to globally enable port-based address allocation and to automatically generate a subscriber identifier on an interface.

After enabling DHCP port-based address allocation on the switch, use the ip dhcp pool global configuration command to preassign IP addresses and to associate them to clients.