This chapter describes how to configure Intelligent Traffic Director (ITD) on the Cisco NX-OS device.

Your software release might not support all the features documented in this module. For the latest caveats and feature information, see the Bug Search Tool at https:/​/​tools.cisco.com/​bugsearch/​ and the release notes for your software release. To find information about the features documented in this module, and to see a list of the releases in which each feature is supported, see the "New and Changed Information"chapter or the Feature History table in this chapter.

Intelligent Traffic Director (ITD) is an intelligent, scalable clustering and load-balancing engine that addresses the performance gap between a multi-terabit switch and gigabit servers and appliances. The ITD architecture integrates Layer 2 and Layer 3 switching with Layer 4 to Layer 7 applications for scale and capacity expansion to serve high-bandwidth applications.

ITD provides adaptive load balancing to distribute traffic to an application cluster. With this feature on the Cisco Nexus 7000 Series switch, you can deploy servers and appliances from any vendor without a network or topology upgrade.

Intelligent Traffic Director offers simplicity, flexibility, and scalability. This makes it easier for customers to deploy a traffic distribution solution in a wide variety of use cases without the use of any external hardware. Here are a few common deployment scenarios:

The following example use cases are supported by the Cisco ITD feature:

ITD on the Cisco NX-OS switch enables the following:

You can connect servers to the Cisco NX-OS device in one-arm deployment mode. In this topology, the server is not in the direct path of client or server traffic, which enables you to plug in a server into the network with no changes to the existing topology or network. 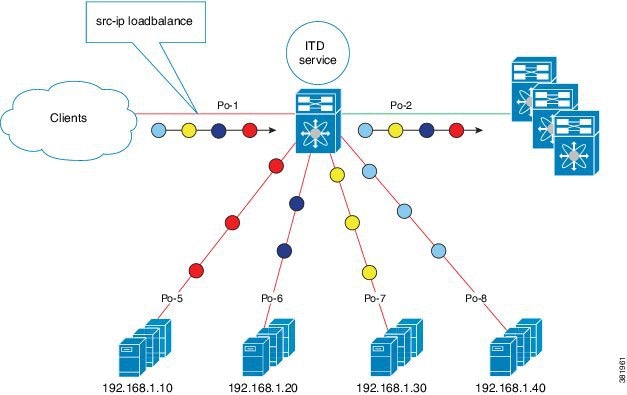 The ITD feature supports an appliance cluster connected to a virtual port channel (vPC). The ITD service runs on each Cisco NX-OS switch and ITD programs each switch to provide flow coherent traffic passing through the nodes. 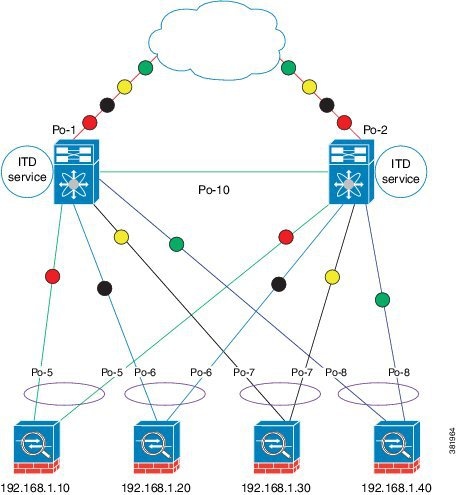 The key features are: 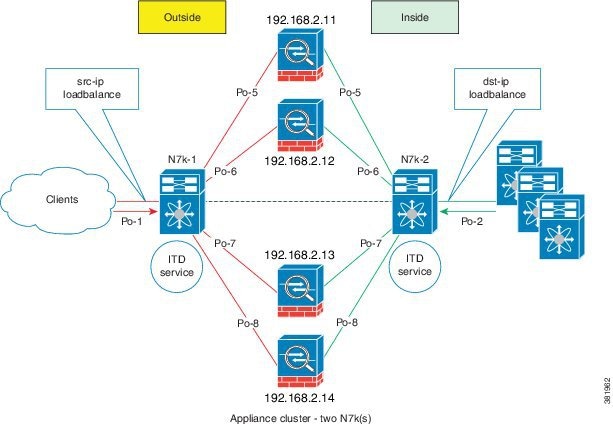 The ITD service can be configured to host a virtual IP (VIP) on a Cisco NX-OS 7000 Series switch. Internet traffic destined for the VIP will be load balanced to the active nodes. Unlike traditional server load balancers, source NAT is not needed as the ITD service is not a stateful load balancer. 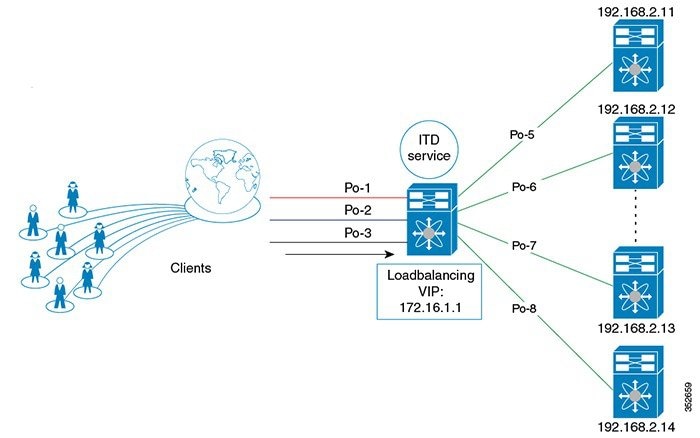 Attention: Configure a single VIP address for an ITD service serving a group of nodes (or device group).

The ITD feature supports device groups. When you configure a device group you can specify the following:

The ITD service can be configured in the default VRF as well as non-default VRFs.

The ITD feature enables you to configure specific load-balancing options by using the loadbalance command.

The optional keywords for the loadbalance command are as follows:

When the failed node becomes operational again, it is reinstated as an active node and traffic from the acting standby node is redirected back to the original node and the standby node reverts to the pool of standby nodes.

When multiple nodes fail, traffic destined to all failed nodes gets redirected to the first available standby node.

The same ingress interface can be configured in two ITD services, allowing one IPv4 ITD service and one IPv6 ITD service.

For an IPv6 node (in an IPv6 device-group), if the node is a dual-homed node (that is, it supports IPv4 and IPv6 network interfaces), an IPv4 probe can be configured to monitor the health. Since IPv6 probes are not supported, this provides a way to monitor health of IPv6 data nodes using a IPv4 probe.

Health of an Interface Connected to a Node

ITD leverages the IP service level agreement (IP SLA) feature to periodically probe each node. The probes are sent at a one second frequency and sent simultaneously to all nodes. You can configure the probe as part of the cluster group configuration. A probe is declared to have failed after retrying three times.

Upon marking a node as down, the ITD performs the following tasks automatically to minimize traffic disruption and to redistribute the traffic to remaining operational nodes:

For sandwich mode cluster deployments, the ITD service runs on each Cisco NX-OS 7000 series switch. The health of the ITD channel is crucial to ensure flow coherent traffic passing through cluster nodes in both directions.

Each ITD service probes its peer ITD service periodically to detect any failure. A ping is sent every second to the peer ITD service. If a reply is not received it is retried three times. The frequency and retry count are not configurable.

If the heartbeat signal is missed three times in a row, then the ITD channel is considered to be down.

While the ITD channel is down, traffic continues to flow through cluster nodes. However, since the ITD service on each switch is not able to exchange information about its view of the cluster group, this condition requires immediate attention. A down ITD channel can lead to traffic loss in the event of a node failure.

Failaction for ITD enables traffic on the failed nodes to be reassigned to the first available active node. Once the failed node comes back, it automatically resumes serving the connections. The failaction command enables this feature.

Failaction Reassignment Without a Standby Node

If all the nodes are down, the packets get routed automatically.

Failaction Reassignment with a Standby Node

When failaction node reassignment is not configured, there are two possible scenarios:

No Failaction Reassignment with a Probe Configured

The ITD probe can detect the node failure or the lack of service reachability.

No Failaction Reassignment without a Probe Configured

Without a probe configuration, ITD cannot detect the node failure. When the node is down, ITD does not reassign or redirect the traffic to an active node.

ITD requires an Enhanced Layer 2 Package license. For a complete explanation of the Cisco NX-OS licensing scheme and how to obtain and apply licenses, see the Cisco NX-OS Licensing Guide.

ITD has the following prerequisites:

Guidelines and Limitations for ITD

ITD has the following configuration guidelines and limitations:

The server can be connected to the switch through a routed interface or port-channel, or via a switchport port with SVI configured.

To display the ITD configuration, perform one of the following tasks:

These examples show how to verify the ITD configuration:

Warnings and Error Messages for ITD

The following warnings and error messages are displayed for ITD:

This table includes only the updates for those releases that have resulted in additions or changes to the feature.