High availability is critical to maximize network and system uptime, thereby meeting predefined SLAs. This section outlines the validation methodology and the corresponding results of the testing.

Each layer in the EttF solution is verified for HA functionality and recovery times. Simulated Layer 3 traffic is traversing end-to-end from the cell/area zone through the manufacturing zone, and from the cell/area zone through the DMZ to the outside world. Various failures are triggered at each layer, and the convergence time is measured to characterize and quantify the impact on availability. 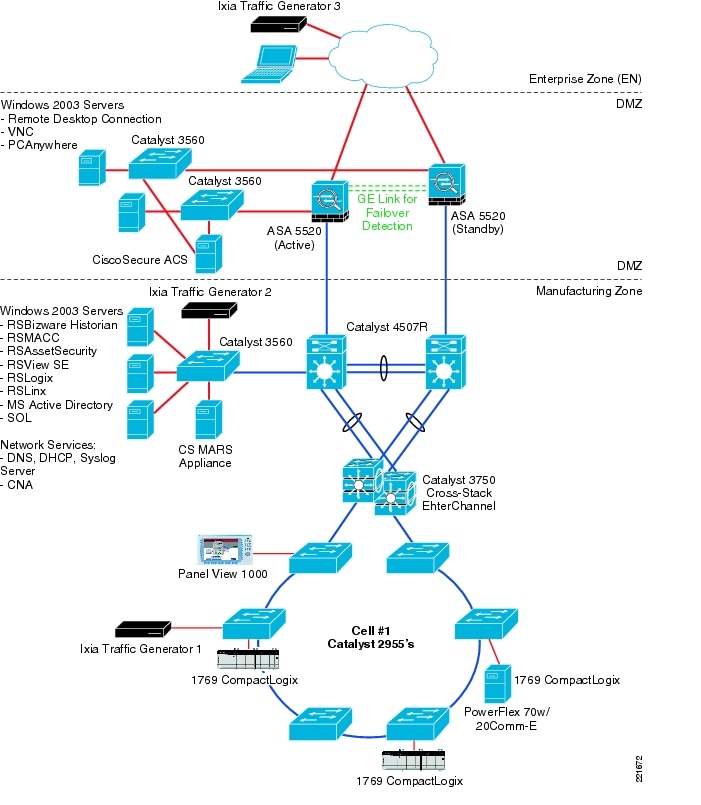 Layer 3 traffic is flowing from Tx1 ‡ Tx2 and from Tx1 ‡ Tx3. Tx2 and Tx3 are injecting 1000 simulated OSPF routes into the network and Tx1 is sending to all the simulated routes. The idea is to simulate TCP-based traffic as if originating from an application server such as Historian.

Three test suites are explored to characterize different failure/recovery times at different layers in the EttF design. Various disruptions are initiated at the cell/area zone, manufacturing zone, and DMZ levels. With each failure, convergence time is measured using the following formula:

HSRP with only one logical router was selected so that the end nodes would have a VIP and Virtual MAC that remains persistent. It turns out that the better solution is to enable the stack-mac persistent 0 feature as indicated by the results.

The Suite 1 test results (all in milliseconds) are provided in the following tables.

Use Case 1—Fail physical link in EtherChannel to 4500-1

Use Case 2—Fail physical link in EtherChannel to 4500-2

The Suite 2 test results (all in milliseconds) are provided in the following tables.

Test suite 3 removes the control network-facing interface on the active ASA, as follows:

The following equipment is needed for performing these tests: