Sizing the components of the Preferred Architecture for Enterprise Collaboration solution is an important part of the overall solution design.

For a given deployment, the goal of the sizing process is to determine:

Sizing can be a complex exercise because of numerous parameters to take into considerations. In order to simplify the sizing exercise, this chapter provides some sizing examples with corresponding assumptions. We will refer to these sizing examples as simplified sizing deployments. If the requirements of your particular deployment are within those assumptions, then you can use the simplified sizing deployments in this document as a reference. If not, then the normal sizing calculations have to be performed as described in the sizing chapter of the Cisco Collaboration SRND and product documentation available at http://www.cisco.com/go/ucsrnd.

Once the sizing is done for the products that are deployed with virtualization, determine how to place the virtual machines on Cisco Unified Computing System (UCS) servers, and consider the co-residency rules. Ultimately, this virtual machine placement process determines how many UCS servers are required for the solution.

This chapter explains sizing for all modules that are covered in this document, namely: Call Control, Conferencing, Collaboration Edge, and Core Applications. This chapter also covers Virtual Machine Placement and Platforms.

For products that are deployed as virtual machines, this document does not provide details on the virtual machine OVA template specification. For that information, refer to the documentation on Unified Communications in a Virtualized Environment, available at http://www.cisco.com/go/uc-virtualized.

Table 6-1 lists the topics that are new in this chapter or that have changed significantly from previous releases of this document.

For Unified CM, the simplified sizing guidance covers deployments with up to 10,000 users and 10,000 devices. Unified CM supports more users and more devices under different assumptions or by adding more call processing pairs, but this is outside the scope of the simplified sizing guidance provided in this chapter. Table 6-2 describes the simplified sizing deployments. The assumptions made for those deployments are documented below this table. If the number of users or endpoints in your deployment is outside of the values in Table 6-2 , or if the requirements of your specific deployment fall outside of the assumptions, do not use these simplified sizing deployments, but rather perform the normal sizing procedure documented in the sizing chapter of the Cisco Collaboration SRND available at http://www.cisco.com/go/ucsrnd and in the product documentation available at http://www.cisco.com/c/en/us/support/unified-communications/unified-communications-manager-callmanager/tsd-products-support-series-home.html.

Table 6-2 sizes deployments based on the maximum number of users and devices, whichever number is greater. For example, in a deployment with 5,000 users and an average of two devices per user (for example, each user has a desk phone and a Jabber client in softphone mode), the 7-node deployment is required because there are 10,000 devices in total.

The 7.5k-user virtual machine configuration (OVA template) is used in these simplified sizing deployments in order to optimize the overall resources consumed on the UCS server. This OVA template requires a full UC performance CPU platform such as the Cisco Business Edition 7000; and it is not supported on the Business Edition 6000, for example. For more information on those OVA virtual machine configuration templates and on the platform requirements, refer to the documentation at www.cisco.com/go/uc-virtualized.

A Unified CM call processing pair deployed with the 7.5k-user OVA template could support up to 7,500 users under some conditions. But in this design, we use some assumptions that put an additional load on Unified CM; for instance, we assume that each user can be configured with a Remote Destination Profile for Single Number Reach, each user can use Extension Mobility, each endpoint can be CTI controlled, some shared lines are configured, mobile and remote access is enabled, and so forth. Therefore the capacity per Unified CM call processing pair is reduced, as shown in Table 6-2 . The following description provides more information on the assumptions used in this simplified sizing model.

The following assumptions apply to the two simplified sizing deployments listed in Table 6-2 :

The two IM and Presence nodes are deployed as a pair in order to provide redundancy if one of the nodes fails.

The number of phones and DNs supported on a Cisco Integrated Services Router (ISR) in Survivable Remote Site Telephony (SRST) mode depends on the platform. Table 6-4 provides capacity examples for only three platforms. For information on other SRST platforms, including information on the required amount of DRAM and flash memory, refer to the SRST documentation available at

Sizing a deployment for conferencing is primarily an exercise in deciding how many concurrent connections are required to TelePresence Servers. Considerations include:

Conference resources are generally dedicated to a region in order to keep as much of the conference media on the regional network; therefore, sizing can be considered on a region-by-region basis.

Audio and video conference sizing depends heavily on specific details about the customer, their user base, and their conferencing habits. The guidelines in this section can be used as a basis for sizing a conferencing deployment, but user-to-port ratios will vary greatly depending on the deployment environment and the requirements of the organization.

Table 6-5 shows suggested ratios to start planning conference resource requirements. These numbers vary depending on the capabilities of deployed endpoints, availability of alternative audio conferencing such as Cisco WebEx, and users' comfort level in creating and joining conferences. As a starting point, the following formulas can be used to calculate port requirements:

The numbers in Table 6-5 can be used for either scheduled or non-scheduled conferencing. It is expected that, for scheduled meetings, customers can use existing usage data to draw more definite conclusions about concurrent meeting usage.

Understanding what type of meetings a customer expects to take place will help further refine the number of ports required. The total number of ports can be calculated with the formula:

Another important point to consider is what the maximum meeting size is likely to be. In most cases the largest meeting is an all-hands meeting type. For instance, if a customer has 1,000 users but has a requirement to join 96 systems in an all-hands TelePresence conference, this would override the 75 port suggestion.

Video resolution determines the quality of users' video experience and the number of video connections that a Cisco TelePresence Server can support. For optimal experiences, we recommend enabling high definition (HD) video calls at a minimum resolution of 720p and 30 frames per second (fps). Depending on the budget and capability of an organization's endpoints and network, HD video calls might not always be possible. Table 6-6 shows TelePresence Server port capacity based on video quality, assuming the video streaming rate is 30 fps. The number of audio ports per screen license is not shown and is equal to 52, with a maximum of 200 audio ports supported per TelePresence Server.

There are other considerations to keep in mind too. For example:

Clustering provides only high availability; it does not increase the maximum number of conference bridges or concurrent calls that can be supported.

Table 6-9 shows the maximum capacity that can be handled at any point of time by a single node.

In order to better understand the relationship between the cluster capacity, license capacity, and level of redundancy, the following example analyses the video capacity during normal operations and after a failover, using the medium OVA template:

The large OVA template is supported only with limited hardware. Refer to the documentation at http://www.cisco.com/go/uc-virtualized for more information.

The following assumptions are used for the Expressway simplified sizing deployments in Table 6-10 :

For more information on Expressway, refer to the Cisco Expressway Administrator Guide, available at

In this case we need to size the cluster to support 1,600 concurrent registrations and 140 concurrent calls (80+60).

After some time, the business-to-business calls in this example increase from 1% to 2%. We now need to account for 200 concurrent calls (80+120) instead of 140. The maximum that a medium OVA template can handle is 150 calls, so we need to deploy a larger cluster in this case. Table 6-10 shows that Deployment 2 can account for 300 concurrent calls even in case of a server failure. Therefore, the administrator in this example decides to add another medium OVA node to the Expressway-C and Expressway-E clusters, for a total of 3 nodes per cluster.

A company has 8,000 users. During the busiest hour, 10% of them are in a call at the same time. 8% of these users are calling external destinations, while the remaining users are engaged in internal calls. The Telecom carrier and the enterprise have agreed that G.711 can be used on all calls, therefore no transcoding is needed. For this deployment, 640 SIP sessions (8% of 8,000) are needed. Table 6-11 shows that a Cisco 3925 ISR can support up to 800 sessions. Thus, for this example two Cisco 3925 ISRs with Cisco Unified Border Element software are selected, one active and one standby to provide redundancy.

It is also important to consider the amount of storage required to store voice mail. The message storage depends on the size of the virtual disk. For example, the approximate message storage using the G.711 codec is 137k minutes with the 5k-user OVA template, which is defined with one vDisk of 200 GB. Note that with the 10k-user OVA template, different vDisk sizes are available to address different message storage requirements. For more information, refer to the Cisco Unity Connection Supported Platforms List.

We recommend two simplified sizing deployments for Cisco TMS, illustrated in Table 6-13 . There are other possible TMS deployments, but they are not covered in this guide. For instance, the single server deployment that has all TMS, TMSPE, TMSXE, and Microsoft SQL components residing in the same virtual machine is not described here because it does not provide redundancy.

The two deployments in Table 6-13 provide high availability. The redundant node is deployed for resiliency, not for scalability. A load balancer providing a single virtual IP address for the primary and backup nodes is also required.

Other factors that influence Cisco TMS performance and scaling include:

For more information on sizing Cisco TMS, refer to the Cisco TelePresence Management Suite Installation and Upgrade Guide, available at

With Cisco Collaboration products that are deployed with virtualization, after sizing the deployment, the next step is to determine how to place the virtual machines together on the Cisco Unified Computing System (UCS) servers, which will ultimately determine how many UCS servers are required for the solution. This process is performed with the Collaboration Virtual Machine Placement Tool (VMPT), which requires a cisco.com login and which is available at http://www.cisco.com/go/vmpt.

Figure 6-1 shows an example of using VMPT for a deployment with 5,000 users. This example assumes that Cisco Business Edition 7000M is deployed. It does not include the TelePresence servers, which could be deployed, for example, with the Multiparty Media 400v or TelePresence Server MSE 8710 platforms. 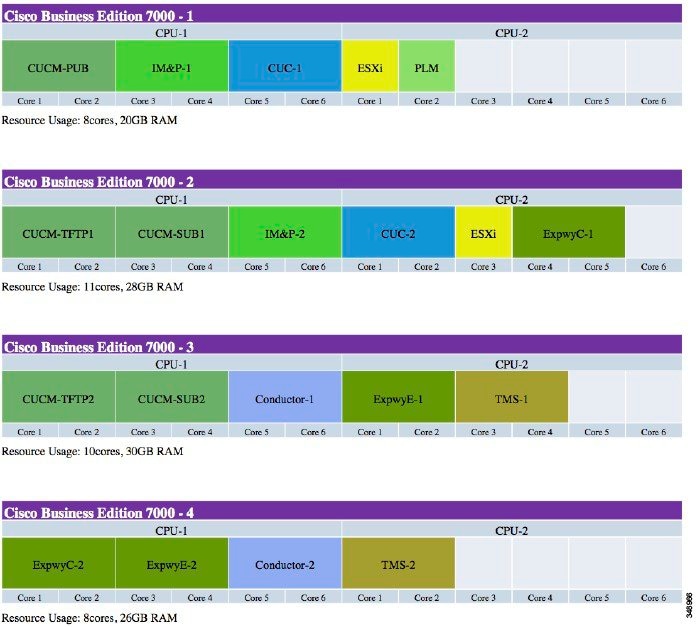 In general, in addition to using VMPT, it is a good practice to validate the virtual machine placement by ensuring that the deployment meets all the co-residency requirements documented at

The main placement and co-residency rules are:

Even though the hardware platforms can be highly redundant, it is good practice to plan for hardware redundancy. For example, do not deploy the primary and backup application virtual machines on the same UCS server, as shown in the example in Figure 6-1. Instead, deploy primary and backup virtual machines on different servers to provide redundancy in case a host fails.

For the products that are deployed with virtualization, Cisco Business Edition 7000 can be an excellent solution. It is easy to order and easy to deploy. It includes the Cisco UCS server hardware and a hypervisor license. VMware vSphere Hypervisor (ESXi) is pre-installed. Business Edition 7000 is also pre-loaded with the Cisco Collaboration software set.