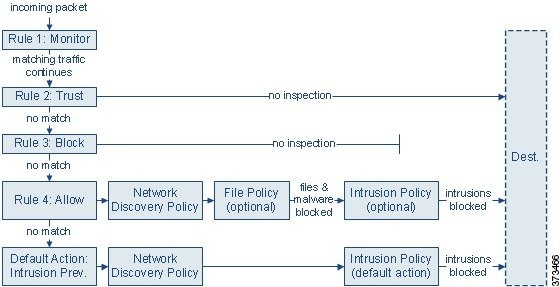 In most cases, the system handles network traffic according to the first access control rule where all the rule’s conditions match the traffic. Except Monitor rules (which log traffic but do not affect traffic flow), the system does not continue to evaluate traffic against additional, lower-priority rules after that traffic matches a rule.

The Monitor action does not affect traffic flow; matching traffic is neither immediately permitted nor denied. Rather, traffic is matched against additional rules to determine whether to permit or deny it. The first non-Monitor rule matched determines traffic flow and any further inspection. If there are no additional matching rules, the system uses the default action.

Because the primary purpose of Monitor rules is to track network traffic, the system automatically logs end-of connection events for monitored traffic. That is, connections are logged even if the traffic matches no other rules and you do not enable logging on the default action. 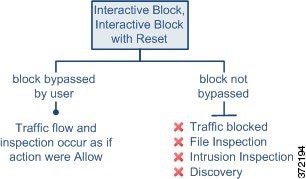 The Allow action allows matching traffic to pass, though it is still subject to identity requirements.