If the system detects a TLS/SSL handshake over a TCP connection, it determines whether it can decrypt the detected traffic. If it cannot, it applies a configured action:

If the system can decrypt the traffic, it blocks the traffic without further inspection, evaluates undecrypted traffic with access control, or decrypts it using one of the following methods:

Decrypted traffic is subject to the same traffic handling and analysis as originally unencrypted traffic: network, reputation, and user-based access control; intrusion detection and prevention; Cisco Advanced Malware Protection (Cisco AMP); and discovery. If the system does not block the decrypted traffic post-analysis, it re-encrypts the traffic before passing it to the destination host.

This section discusses information you should keep in mind when creating your decryption policies and rules.

The Case for Decryption

All encrypted connections are:

Keep in mind that decrypting and then re-encrypting traffic adds a processing load on the device, which can reduce overall system performance.

When not to decrypt traffic

You should not decrypt traffic if doing so is forbidden by:

If you elect to bypass decryption for certain types of traffic, no processing is done on the traffic. The encrypted traffic is first evaluated by SSL policy and then proceeds to the access control policy, where a final allow or block decision is made. Encrypted traffic can be allowed or blocked on any TLS/SSL rule condition, including, but not limited to:

When to decrypt traffic

All encrypted traffic must be decrypted to take advantage of the Firepower System's threat protection and policy enforcement features. To the extent your managed device allows traffic to be decrypted (subject to its memory and processing power), you should decrypt traffic that is not protected by law or regulation. If you must decide what traffic to decrypt, base your decision on the risk of allowing the traffic on your network. The Firepower System provides a flexible framework for classifying traffic using rule conditions, which include URL reputation, cipher suite, protocol, and many other factors.

The Firepower System provides two methods of decryption, which are discussed in the following sections.

To use the Decrypt - Resign rule action, you must have a CA certificate file and paired private key file. You can generate a CA and private key in the Firepower System if you don't already have them.

The main purpose of decrypting with a known key is to protect your servers from external attacks.

To use the Decrypt - Known Key rule action, you must have the server’s certificate file and paired private key file.

This example shows how to block the following unsecure TLS/SSL protocols on your network:

You should exclude these unsecure protocols from your network because they are all exploitable. You can block TLS 1.0 and SSLv3 using the Version tab page on the SSL rule. Because the Firepower System considers SSLv2 as undecryptable, you can block it using the Undecryptable Actions on the SSL policy.

Each TLS/SSL rule has the following components.

By default, rules are enabled. If you disable a rule, the system does not use it to evaluate network traffic, and stops generating warnings and errors for that rule.

Rules in an SSL policy are numbered, starting at 1. The system matches traffic to rules in top-down order by ascending rule number. With the exception of Monitor rules, the first rule that traffic matches is the rule that handles that traffic.

A rule’s logging settings govern the records the system keeps of the traffic it handles. You can keep a record of traffic that matches a rule. You can log a connection when the system blocks an encrypted session or allows it to pass without decryption, according to the settings in an SSL policy. You can also force the system to log connections that it decrypts for further evaluation by access control rules, regardless of how the system later handles or inspects the traffic. You can log connections to the Firepower Management Center database, as well as to the system log (syslog) or to an SNMP trap server.

In most cases, the system handles network traffic according to the first TLS/SSL rule where all the rule’s conditions match the traffic. Except in the case of Monitor rules (which log traffic but do not affect traffic flow), the system does not continue to evaluate traffic against additional, lower-priority rules after that traffic matches a rule. Conditions can be simple or complex; you can control traffic by security zone, network or geographical location, VLAN, port, application, requested URL, user, certificate, certificate distinguished name, certificate status, cipher suite, or encryption protocol version.

In addition to ordering rules by number, you can group rules by category. By default the system provides three categories: Administrator, Standard, and Root. You can add custom categories, but you cannot delete the system-provided categories or change their order.

The following scenario summarizes the ways that SSL rules handle traffic in an inline deployment. 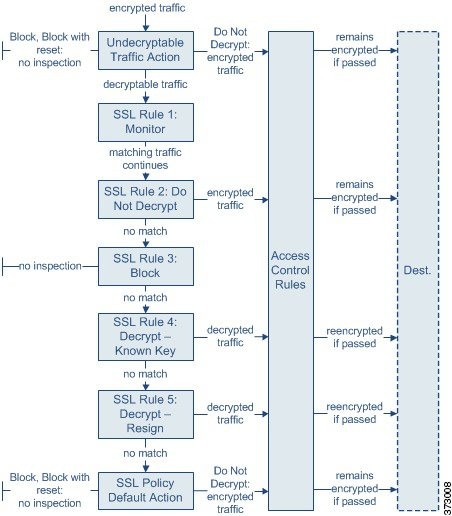 This section presents several scenarios in which the Life Insurance Example, Inc. life insurance company (LifeIns) uses SSL inspection on encrypted traffic to help audit their processes. Based on their business processes, LifeIns plans to deploy:

LifeIns created a customer-facing website for their customers. LifeIns receives encrypted questions and requests regarding policies from prospective customers through their website and through e-mail. LifeIns’s Customer Service department processes them and returns the requested information within 24 hours. Customer Service wants to expand its incoming contact metrics collection. LifeIns has an established internal audit review for Customer Service.

Lately, an unknown source has been sending spoofed responses to LifeIns. Though LifeIns’s underwriters receive training on proper Internet use, LifeIns’s IT department first wants to analyze all encrypted traffic that takes the form of medical responses, then wants to block all spoof attempts.

Traffic Decryption in a Passive Deployment

Traffic from an external network goes to LifeIns’s router. The router routes traffic to the Customer Service department, and mirrors a copy of the traffic to the managed device for inspection.

On the managing Firepower Management Center, a user in the access control configures TLS/SSL inspection to:

For all TLS/SSL-encrypted traffic sent to Customer Service, the managed device logs the connection.

For all TLS/SSL-encrypted traffic that contains requests about policies, the managed device allows the traffic without decrypting it and logs the connection.

Encrypted Traffic Inspection with a Private Key in a Passive Deployment

For all TLS/SSL-encrypted traffic that contains application form data, the system decrypts the traffic and logs the connection.

For traffic with legitimate application form information, the system logs the connection.

In contrast, if the decrypted traffic contains fake application data, the system logs the connection and the fake data.

Traffic Decryption in an Inline Deployment

LifeIns plans to deploy a device in an inline deployment for the Underwriting department.

On the managing Firepower Management Center, a user in the Access Control and SSL Editor custom role configures an SSL access control rule to:

The system reencrypts allowed decrypted traffic before sending it to the destination host.

In the following scenarios, the user submits information online to a remote server. The user’s browser establishes a TCP connection with the server, then initiates an SSL handshake. The managed device receives this traffic; based on handshake and connection details, the system logs the connection and acts on the traffic. If the system blocks the traffic, it also closes the TCP connection. Otherwise, the client and server complete the SSL handshake, establishing the encrypted session.

For all SSL-encrypted traffic sent to and from the Underwriting department, the system logs the connection.

For all TLS/SSL-encrypted traffic originating from the senior underwriters, the managed device allows the traffic without decrypting it and logs the connection.

For all SMTPS email traffic improperly sent from LifeIns’s underwriting department to MedRepo’s Customer Service department, the system blocks the traffic during the SSL handshake without further inspection and logs the connection.

Encrypted Traffic Inspection with a Private Key in an Inline Deployment

In contrast, any decrypted traffic that is a spoof attempt is dropped. The system logs the connection and the spoof attempt.

For all TLS/SSL-encrypted traffic sent from the new and junior underwriters to MedRepo’s requests department, the system uses a re-signed server certificate to obtain session keys, then decrypts the traffic and logs the connection. Legitimate traffic is allowed and reencrypted before being sent to MedRepo.

In contrast, any decrypted traffic that contains information that does not meet regulatory requirements is dropped. The system logs the connection and the non-conforming information.