You can configure dynamic ARP inspection to drop ARP packets when the IP addresses in the packets are invalid or when the MAC addresses in the body of the ARP packets do not match the addresses specified in the Ethernet header. Use the ip arp inspection validate [src-mac] [dst-mac] [ip] global configuration command. For more information, see the “Performing Validation Checks (optional)” section on page 1-11. 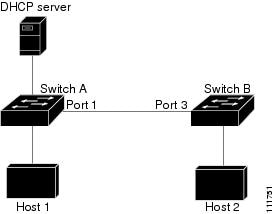 The switch CPU performs Dynamic ARP Inspection validation checks; therefore, the number of incoming ARP packets is rate-limited to prevent a denial-of-service attack. By default, the rate for untrusted interfaces is 15 packets per second (pps). Trusted interfaces are not rate-limited. You can change this setting by using the ip arp inspection limit interface configuration command.

For configuration information, see the “Limiting the Rate of Incoming ARP Packets (optional)” section on page 1–9.

This example shows how to configure dynamic ARP inspection on Switch A. You would perform a similar procedure on Switch B: