Overview of the Router

The Cisco 1900 Series Integrated Services Routers (ISRs) are modular routers with LAN and WAN connections that can be configured by means of interchangeable interface cards and internal service modules (ISMs). The series currently consists of the 1905, 1921, 1941, and 1941W (wireless) models. The 1941W is Wi-Fi CERTIFIED™ and 802.11a/b/g/n-compliant. The modular design of the routers provides flexibility, allowing you to configure your router according to your needs.

This chapter provides an overview of the Cisco 1900 series routers and includes the following sections:

This warning symbol means danger. You are in a situation that could cause bodily injury. Before you work on any equipment, be aware of the hazards involved with electrical circuitry and be familiar with standard practices for preventing accidents. Use the statement number provided at the end of each warning to locate its translation in the translated safety warnings that accompanied this device. Statement 1071

Ultimate disposal of this product should be handled according to all national laws and regulations. Statement 1040

No user-serviceable parts inside. Do not open. Statement 1073

Only trained and qualified personnel should be allowed to install, replace, or service this equipment. Statement 1030

Warning statement 1017 applies to the countries of Finland, Norway, and Sweden.

This section contains views of the front and rear panels of Cisco 1900 series routers, showing the locations of the power and signal interfaces, the interface card slots, and the status indicators.

Power off the router and the power over Ethernet (PoE) before installing an EHWIC in the Cisco 1905 and Cisco 1921 ISRs.

Power off the PoE before installing an EHWIC in the Cisco 1905 and Cisco 1921 ISRs.

Figure 1-3 shows the front panel of a Cisco 1941 wireless router with antennas mounted.

The Cisco 1905 comes with a permanently installed EHWIC in slot 0 (Right).

Figure 1-4 shows the front panel of the Cisco 1941W (without antennas) with the LED names. 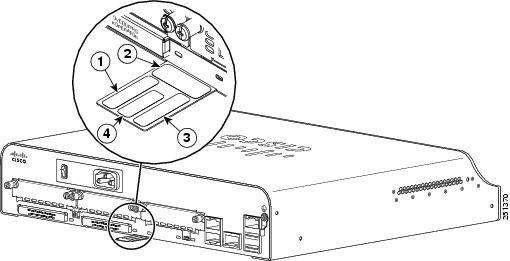 The serial number for Cisco 1900 series routers is 11 characters long.

The tool streamlines the process of locating serial number labels and identifying products. Serial number information expedites the entitlement process and is important for access to support services.

The Cisco Product Identification tool can be accessed at the following URL:

Table describes the interfaces available on the Cisco 1900 series routers.

Power off the PoE before installing an EHWIC in the Cisco 1905 and Cisco 1921 ISRs.

Table 1-3 summarizes the memory options for Cisco 1900 series routers. The default memory numbers for RAM represent the minimum usable memory. You can install additional RAM in multiples of the default amount, up to the maximum amount on the Cisco 1940 series ISRs. The Cisco 1905 and Cisco 1921 have factory installed, fixed memory modules and no expansion slots.

Table 1-4 summarizes the LED indicators that are located in the router bezel or chassis, but not on the interface cards. Not all models have every LED.

An internal fan provides chassis cooling. An onboard temperature sensor controls the fan speed. The fan is always on when power is applied to the router. Under most conditions, the fan operates at the slowest speed to conserve power and reduce fan noise. It operates at the higher speeds when necessary under conditions of higher ambient temperature. See the “Chassis Airflow Diagram” section.

An internal real-time clock with battery backup provides the system software with time of day on system power up. This allows the system to verify the validity of the certification authority (CA) certificate. The Cisco 1900 series router has a lithium battery. This battery lasts the life of the router under the operating environmental conditions specified for the router, and is not field-replaceable.

If the lithium battery in a Cisco 1900 ISR should fail, the router must be returned to Cisco for repair.

Although the battery is not intended to be field-replaceable, the following warning must be heeded:

Dispose of used batteries according to the manufacturer’s instructions. Statement 1015

The chassis of the router is constructed with a KensingtonTM security slot on the back panel. It can be secured to a desktop or other surface by using KensingtonTM lockdown equipment.

The embedded Wi-Fi CERTIFIED™, 802.11a/b/g/n-compliant wireless access point is preinstalled in the router as an optional feature. The Cisco 1900 routers support both autonomous and unified features and network configurations.

The wireless access point does not have an external console port for connections. To configure the wireless device, you must use a console cable to connect a PC to the host router’s console port as described in “Cable Information and Specifications for Cisco 1900 Series Routers,” and then use the Cisco IOS command-line interface (CLI) to access the interface.

Table 1-5 describes the radios and antennas for the wireless routers.

The Cisco 1905 and Cisco 1921 ISRs have a baud reset button on the back panel. When the button is pressed during power on, ROMMON resets the router to the default console port configuration. If the baud reset button is pressed for longer than 30 seconds, the router defaults to the read-only ROMMON image. The default console port configuration is 9600 baud, 8 data bits, 1 stop bit, no parity, and flow control is set to none.

The numbering format for the slots is interface-type 0/slot-number / interface-number. Table 1-6 summarizes the interface numbering. See Figure 1-5 to identify the slot numbers.