The Firewall Box to Box High Availability Support on Cisco CSR1000v Routers feature enables you to configure pairs of routers to act as backup for each other. This feature can be configured to determine the active router based on a number of failover conditions. When a failover occurs, the standby router seamlessly takes over and starts performing traffic forwarding services and maintaining a dynamic routing table.

Also, in both cases, the pairs of redundant interfaces are configured with the same unique ID number known as the RII. 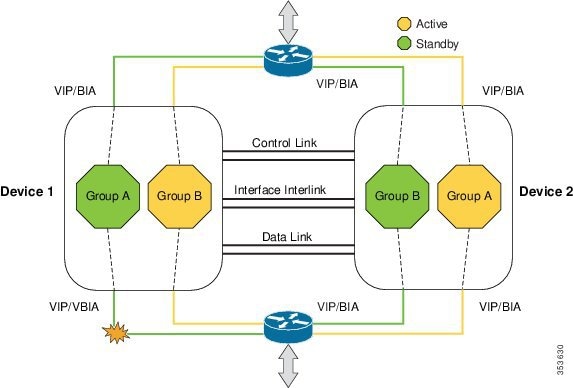 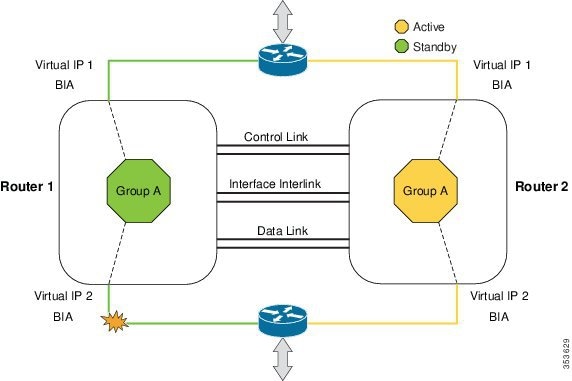 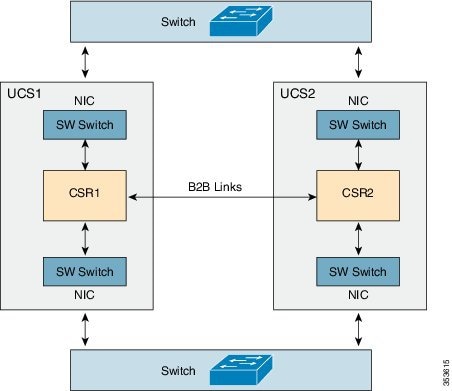 In this deployment, two redundant Cisco CSR 1000v routers are in two independent UCS servers. The two Cisco Unified Computing System (UCS) servers can be in the same data center or two different data centers in different regions. We recommended that you configure two individual physical connections for box-to-box high availability data and control links. However, if the two dedicated physical links are not available, the box-to-box high availability data and control traffic can go through different LAN extension connections. Box-to-Box high availability parameters, such as heart beat period need to be adjusted to take into account the extended delay.

LAN interfaces of each Cisco CSR 1000v router are connected with UCS physical network interface card (NIC) interfaces through switches (for example, ESXi L2 SW). The two physical NICs on each UCS are connected to outside switch to form a box-to-box pair. Gratuitous Address Resolution Protocols (ARP) is sent from CSR LAN interfaces to reach physical switch and its Built-in Address (BIA). 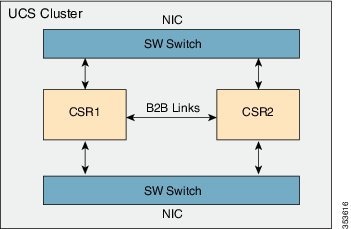 In the above deployment, NAT and Zone-Based Firewall (ZBFW) box-to-box high availability also works on UCS cluster setup. In this case, box-to-box control and data links go through virtual connections within the cluster. Switches (For example, ESXi L2 SW) are used to connect the 2 redundant Cisco CSR 1000v routers to form a box-to-box high availability pair; LAN interfaces on two Cisco CSR 1000v routers are connected directly to the SW switches, and two physical NICs of the cluster UCS are connected with the SW switches to communicate outside the network.

Refer to the Configuring Firewall Stateful Interchassis Redundancy module for additional information on configurations and examples.