The RED mechanism was proposed by Sally Floyd and Van Jacobson in the early 1990s to address network congestion in a responsive rather than reactive manner. Underlying the RED mechanism is the premise that most traffic runs on data transport implementations that are sensitive to loss and will temporarily slow down when some of their traffic is dropped. TCP, which responds appropriately--even robustly--to traffic drop by slowing down its traffic transmission, effectively allows the traffic-drop behavior of RED to work as a congestion-avoidance signalling mechanism.

In considering the usefulness of RED when robust transports such as TCP are pervasive, it is important to consider also the seriously negative implications of employing RED when a significant percentage of the traffic is not robust in response to packet loss. Neither Novell NetWare nor AppleTalk is appropriately robust in response to packet loss, therefore you should not use RED for them.

The DiffServ Compliant WRED feature enables WRED to use the DSCP value when it calculates the drop probability for a packet. The DSCP value is the first six bits of the IP type of service (ToS) byte.

These arguments are optional (you need not use any of them to use the commands) but they are also mutually exclusive. That is, if you use the dscp-based argument, you cannot use the prec-based argument with the same command.

After enabling WRED to use the DSCP value, you can then use the new random-detect dscp command to change the minimum and maximum packet thresholds for that DSCP value.

Three scenarios for using these arguments are provided.

When the average queue size is above the maximum threshold, all packets are dropped. The figure below summarizes the packet drop probability.

Receivers usually try to send an ACK in response to alternating data segments they receive; they send the ACK because for many applications, if the receiver waits out a small delay, it can efficiently include its reply acknowledgment on a normal response to the sender. However, when the receiver receives a data segment out of order, it immediately responds with an ACK to direct the sender to resend the lost data segment.

When a TCP sender detects a dropped data segment, it resends the segment. Then it adjusts its transmission rate to half of what is was before the drop was detected. This is the TCP back-off or slow-down behavior. Although this behavior is appropriately responsive to congestion, problems can arise when multiple TCP sessions are carried on concurrently with the same router and all TCP senders slow down transmission of packets at the same time.

How the Router Interacts with TCP

To see how the router interacts with TCP, we will look at an example. In this example, on average, the router receives traffic from one particular TCP stream every other, every 10th, and every 100th or 200th message in the interface in MAE-EAST or FIX-WEST. A router can handle multiple concurrent TCP sessions. Because network flows are additive, there is a high probability that when traffic exceeds the Transmit Queue Limit (TQL) at all, it will vastly exceed the limit. However, there is also a high probability that the excessive traffic depth is temporary and that traffic will not stay excessively deep except at points where traffic flows merge or at edge routers.

If the router drops all traffic that exceeds the TQL, many TCP sessions will simultaneously go into slow start. Consequently, traffic temporarily slows down to the extreme and then all flows slow-start again; this activity creates a condition of global synchronization.

However, if the router drops no traffic, as is the case when queueing features such as fair queueing or priority queueing (PQ) are used, then the data is likely to be stored in main memory, drastically degrading router performance.

By directing one TCP session at a time to slow down, RED solves the problems described, allowing for full utilization of the bandwidth rather than utilization manifesting as crests and troughs of traffic.

WRED combines the capabilities of the RED algorithm with the IP Precedence feature to provide for preferential traffic handling of higher priority packets. WRED can selectively discard lower priority traffic when the interface begins to get congested and provide differentiated performance characteristics for different classes of service.

You can configure WRED to ignore IP precedence when making drop decisions so that nonweighted RED behavior is achieved.

For interfaces configured to use the Resource Reservation Protocol (RSVP) feature, WRED chooses packets from other flows to drop rather than the RSVP flows. Also, IP Precedence governs which packets are dropped--traffic that is at a lower precedence has a higher drop rate and therefore is more likely to be throttled back.

WRED differs from other congestion avoidance techniques such as queueing strategies because it attempts to anticipate and avoid congestion rather than control congestion once it occurs.

WRED makes early detection of congestion possible and provides for multiple classes of traffic. It also protects against global synchronization. For these reasons, WRED is useful on any output interface where you expect congestion to occur.

WRED provides separate thresholds and weights for different IP precedences, allowing you to provide different qualities of service in regard to packet dropping for different traffic types. Standard traffic may be dropped more frequently than premium traffic during periods of congestion.

WRED is also RSVP-aware, and it can provide the controlled-load QoS service of integrated service.

WRED selectively drops packets when the output interface begins to show signs of congestion. By dropping some packets early rather than waiting until the queue is full, WRED avoids dropping large numbers of packets at once and minimizes the chances of global synchronization. Thus, WRED allows the transmission line to be used fully at all times.

The figure below illustrates how WRED works. 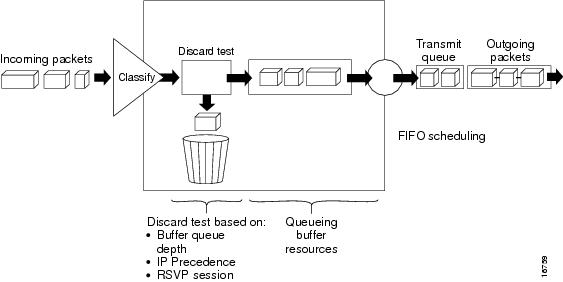 The average queue size is based on the previous average and the current size of the queue. The formula is:

where n is the exponential weight factor, a user-configurable value.

For high values of n, the previous average queue size becomes more important. A large factor smooths out the peaks and lows in queue length. The average queue size is unlikely to change very quickly, avoiding drastic swings in size. The WRED process will be slow to start dropping packets, but it may continue dropping packets for a time after the actual queue size has fallen below the minimum threshold. The slow-moving average will accommodate temporary bursts in traffic.

For low values of n, the average queue size closely tracks the current queue size. The resulting average may fluctuate with changes in the traffic levels. In this case, the WRED process responds quickly to long queues. Once the queue falls below the minimum threshold, the process stops dropping packets.

If the value of n gets too low, WRED will overreact to temporary traffic bursts and drop traffic unnecessarily.