The Multicast VPN (MVPN) feature provides the ability to support multicast over a Layer 3 VPN. As enterprises extend the reach of their multicast applications, service providers can accommodate these enterprises over their Multiprotocol Label Switching (MPLS) core network. IP multicast is used to stream video, voice, and data to an MPLS VPN network core.

If Source Specific Multicast (SSM) is used as the core multicast routing protocol, the multicast IP addresses used for the default and data MDT must be configured within the SSM range on all PE routers.

MVPN also supports the dynamic creation of MDTs for high-bandwidth transmission. Data MDTs are a feature unique to Cisco IOS software. Data MDTs are intended for high-bandwidth sources such as full-motion video inside the VPN to ensure optimal traffic forwarding in the MPLS VPN core. The threshold at which the data MDT is created can be configured on a per-router or a per-VRF basis. When the multicast transmission exceeds the defined threshold, the sending PE router creates the data MDT and sends a UDP message, which contains information about the data MDT, to all routers on the default MDT. The statistics to determine whether a multicast stream has exceeded the data MDT threshold are examined once every second. After a PE router sends the UDP message, it waits 3 more seconds before switching over; 13 seconds is the worst case switchover time, and 3 seconds is the best case. 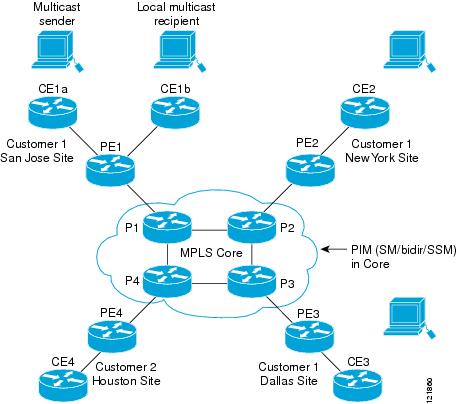 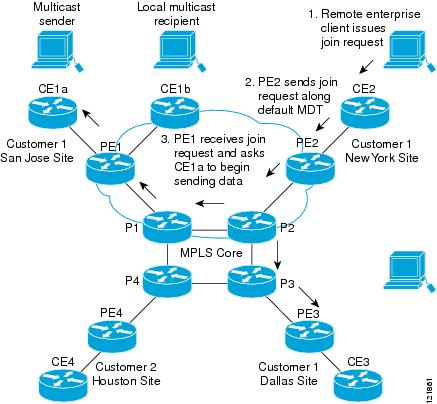 Multicast distributed switching (MDS) is supported for MVPN. When MDS is configured, ensure that all interfaces enabled for IP multicast have MDS enabled correctly—verify that no interface has the no ip mroute-cache command configured (including loopback interfaces).

Cisco software releases that support the MDT SAFI, the source PE address and the MDT group address are passed to PIM using BGP MDT SAFI updates. The RD type has changed to RD type 0, and BGP determines the best path for the MDT updates before passing the information to PIM.

Because the new MDT SAFI does not use BGP route-target extended communities, the regular extended community methods to filter these updates no longer apply. As a result, the match mdt-group route-map configuration command has been added to filter on the MDT group address using access control lists (ACLs). These route maps can be applied—inbound or outbound—to the IPv4 MDT address-family neighbor configuration.

Automigration to the MDT SAFI

Guidelines for Configuring the MDT SAFI

Guidelines for Upgrading a Network to Support the MDT SAFI

When moving from a pre-MDT SAFI to an MDT SAFI environment, the upmost care should be taken to minimize the impact to the MVPN service. The unicast service will not be affected, other than the outage due to the reload and recovery. To upgrade a network to support the MDT SAFI, we recommend that you perform the following steps:

The following policy configuration parameters are supported under the MDT SAFI:

Perform this task to limit the number of multicast routes that can be added in a device.

In the following example, an MDT address family session is configured on a PE router to establish MDT peering sessions for MVPN.