This chapter describes the Multiprotocol over ATM (MPOA) feature, which is supported in Cisco IOS Release 11.3 and later releases.

Procedures for configuring MPOA are provided in the following chapters in this publication:

In an NBMA network, intersubnet routing involves forwarding packets hop-by-hop through intermediate routers. MPOA can increase performance and reduce latencies by identifying the edge devices, establishing a direct VCC between the ingress and egress edge devices, and forwarding Layer 3 packets directly over this shortcut VCC, bypassing the intermediate routers. An MPOA client (MPC) provides the direct VCCs between the edge devices or hosts whenever possible and forwards Layer 3 packets over these shortcut VCCs. The MPCs must be used with MPSs resident on routers.

The sequence of events shown in the figure are summarized as follows:

The table below lists and defines the MPOA terms used in in the figure.

An MPOA functional network must have at least one MPS, one or more MPCs, and zero or more intermediate routers implementing NHRP servers. The MPSs and MPCs use LANE control frames to discover each other's presence in the LANE network.

An MPC/MPS can serve as one or more LAN Emulation Clients (LECs). The LEC can be associated with any MPC/MPS in the router or Catalyst 5000 series switch. A LEC can be attached both an MPC and an MPS simultaneously.

The figure below shows the relationships between MPC/MPS and LECs. 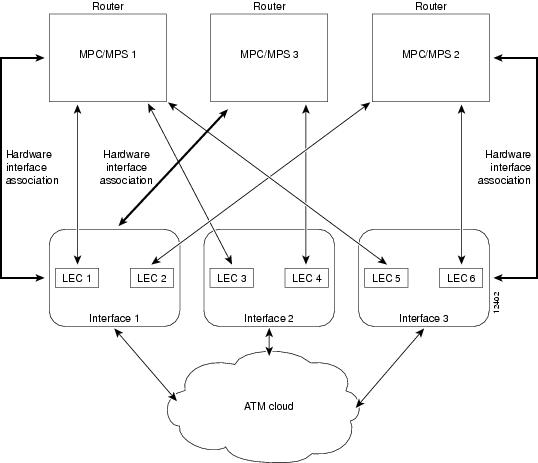 The following components are required for an MPOA network:

To configure an MPC/MPS, perform the following tasks:

More than one MPC/MPS can be attached to the same interface. MPC/MPS 3 and MPC/MPS 1 are both attached to interface 1, although they get different control addresses. Any LEC running on any subinterface of a hardware interface can be bound to any MPC/MPS. However, once a LEC is bound to a particular MPC/MPS, it cannot be bound to another MPC/MPS.

Ensure that the hardware interface attached to an MPC/MPS is directly reachable through the ATM network by all the LECs that are bound to it.