The Cisco implementation of LANE makes an ATM interface look like one or more Ethernet interfaces.

LANE is an ATM service defined by the ATM Forum specification LAN Emulation over ATM, ATM_FORUM 94-0035. This service emulates the following LAN-specific characteristics:

LANE in an ATM environment provides routing between ELANs for supported routing protocols and high-speed, scalable switching of local traffic.

The ATM LANE system has three servers that are single points of failure. These are the LANE Configuration Server (LECS), the ELAN server (LES), and the broadcast and unknown server (BUS). Beginning with Cisco IOS Release 11.2, LANE fault tolerance or Simple LANE Service Replication on the ELAN provides backup servers to prevent problems if these servers fail.

The fault tolerance mechanism that eliminates these single points of failure is described in the "Configuring LAN Emulation" chapter. Although this scheme is proprietary, no new protocol additions have been made to the LANE subsystems.

Any number of ELANs can be set up in an ATM switch cloud. A router can participate in any number of these ELANs.

LANE is defined on a LAN client/server model. The following components are implemented:

If a router has clients for multiple ELANs, the Cisco IOS software can route traffic between the ELANs.

The Cisco implementation has a limit of one LES per ELAN.

In this release, the LES and the LANE BUS are combined and located in the same Cisco 7000 family or Cisco 4500 series router; one combined LECS and BUS is required per ELAN.

One LECS is required per LANE ATM switch cloud.

The LECS's database can have the following four types of entries:

Communication among LANE components is ordinarily handled by several types of switched virtual circuits (SVCs). Some SVCs are unidirectional; others are bidirectional. Some are point-to-point and others are point-to-multipoint. The figure below illustrates the various virtual channel connections (VCCs)--also known as virtual circuit connections--that are used in LANE configuration. 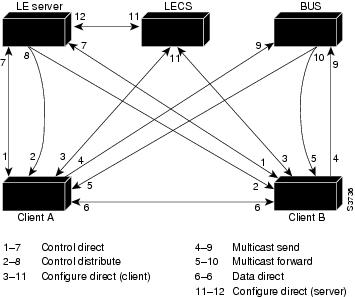 The following section describes various processes that occur, starting with a client requesting to join an ELAN after the component routers have been configured.

The following process normally occurs after a LANE client has been enabled:

LANE clients find the LECS by using the following methods in the listed order:

Once a Control Direct VCC is established between a LANE client and a LES, it remains up.

When a client first joins an ELAN, its LE ARP table has no dynamic entries and the client has no information about destinations on or behind its ELAN. To learn about a destination when a packet is to be sent, the client begins the following process to find the ATM address corresponding to the known MAC address:

For unknown destinations, the client sends a packet to the BUS, which forwards the packet to all clients via flooding. The BUS floods the packet because the destination might be behind a bridge that has not yet learned this particular address.

When a LANE client has broadcast or multicast traffic, or unicast traffic with an unknown address to send, the following process occurs:

This VCC branches at each ATM switch. The switch forwards such packets to multiple outputs. (The switch does not examine the MAC addresses; it simply forwards all packets it receives.)

In a single ELAN scenario, the LANE components might be assigned as follows:

The figure below illustrates this single ELAN configured across several routers. 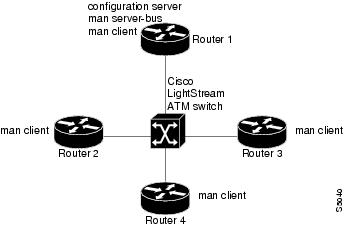 In the multiple LAN scenario, the same switch and routers are used, but multiple ELANs are configured. See the figure below. 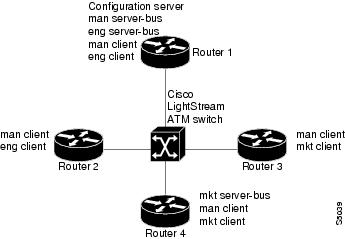 In the following scenario, three ELANs are configured on four routers: