This chapter describes networking the CSM and contains these sections:

Routing with the CSM

You can configure the CSM in a secure or router mode and a single subnet or bridged mode. These sections describe the modes: 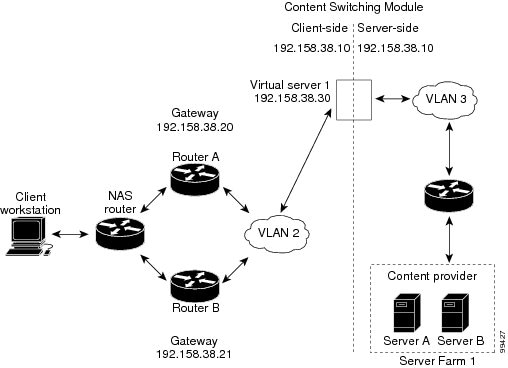 The addresses in Figure 2-1 refer to the steps in the following task table.

The addresses in Figure 2-1 refer to the steps in the following task table, with the exception of setting the server-side IP address to the same value as the client-side IP address.

To configure content switching for the single subnet (bridge) mode, perform this task:

This section describes CSM networking topologies and contains these sections:

CSM Inline and MSFC Not Involved

CSM Inline and MSFC on Server Side

CSM Inline and MSFC on Client Side

CSM Inline and MSFC Not Involved

Figure 2-2 shows the CSM in a Layer 3 configuration without interaction with the MSFC.

The MSFC is not routing CSM VLANs.

All server-to-server communications (direct Layer 3 or load balanced) are through the CSM.

The CSM must use static routes to the upstream router (default gateway).

CSM Inline and MSFC on Server Side

Figure 2-3 shows the CSM in a configuration where the MSFC is located on the server side.

The CSM must use static routes to the upstream router (default gateway).

Routing protocols can be used in the back end.

Layer 2-rewrite is not possible.

CSM Inline and MSFC on Client Side

Figure 2-4 shows the CSM in a configuration where the MSFC is located on the client side.

Figure 2-4 CSM Inline, MSFC Located on the Client Side

The configuration is easy to deploy.

Routing protocols can be used between the MSFC and the upstream router.

All traffic to or from the servers passes through the CSM.

Figure 2-5 shows the CSM in an aggregate-mode configuration.

The CSM is not inline and the module does not see unnecessary traffic.

Requires PBR or client SNAT because return traffic is required.

Layer 2-rewrite is not possible.

Figure 2-6 shows the CSM in a direct server return configuration.

High throughput or bandwidth is not required in the load balancer.

The load balancer does not recognize return traffic.

TCP flows have to be always timed-out.

TCP termination is not possible (only Layer 4 load balancing).

Inband health monitoring is not possible.

Servers must be Layer 2 adjacent with a loopback address.

Routing with the CSM

When forwarding and maintaining load-balancing connections, the CSM must make routing decisions. However, the CSM does not run any routing protocols and does not have access to the MSFC routing tables. The CSM builds its own routing table with three types of entries:

These are configured on the CSM client or the server VLANs.

Default gateways are configured with the gateway keyword from within a client or server VLAN configuration submode. See Chapter 4, "Configuring VLANs." In this release, you may have up to 511 default gateways. However, you cannot have more than seven default gateways for the same VLAN.

Multiple default gateways are supported; however, if the CSM needs to make a routing decision to an unknown destination, the CSM will randomly select one of the gateways without your intervention or control. To control this behavior, use the predictor forward option described in the next paragraph.

There are three situations in which the CSM must make a routing decision:

Upon receiving a new connection.

At this time, the CSM needs to decide where to send the return traffic for that connection. Unlike other devices, the CSM will not perform a route lookup, but it memorizes the source MAC address from where the first packet of the connection was received. Return traffic for that connection is sent back to the source MAC address. This behavior also works with redundancy protocols between upstream routers, such as HSRP.

The CSM is configured in router mode.

A server farm is configured with the predictor forward option. (See Chapter 5, "Configuring Real Servers and Server Farms.") This predictor instructs the CSM to route the connection instead of load balancing it.

In case of multiple gateways, the first two situations can be simplified by using a server farm configured with the gateway as a unique real server. See the "Configuring the Source NAT for Server-Originated Connections to the VIP" section on page A-7.

The CSM implements a variety of features to protect the devices that it is load balancing and to protect itself from a DoS attack. You cannot configure many of these features because they are controlled by the CSM and adjust to the amount of incoming traffic.

The CSM provides these DoS-protection features:

When the number of pending connections exceeds a configurable threshold, the CSM begins using SYN cookies, encrypting all of the connection state information in the sequence numbers that it generates. This action prevents the CSM from consuming any flow state for pending (not fully established) TCP connections. This behavior is fully implemented in hardware and provides a good protection against SYN attacks.

This feature is configurable on a per-virtual server basis and allows you to time out connections that have not been properly established within the configured timeout value specified in seconds.

This feature is configurable on a per-virtual server basis and allows you to time out established connections that have not been passing traffic for longer than an interval configured on a timer.

Some connections may not require TCP termination for Layer 7 load balancing. You can configure any virtual server to terminate all incoming TCP connections before load balancing those connections to the real servers. This configuration allows you to take advantage of all the CSM DoS features located in Layer 4 load-balancing environments.