Cisco Vision Director is purpose-built for large venues, retailers, hospitality providers, and transportation hubs which have extensive video systems deployed throughout and is designed to enhance the viewing of live events, multimedia information, and dynamic content. In addition, it leverages video systems in restaurants, clubs, and luxury suites to allow customers to view both in-house programming as well as external network channels. 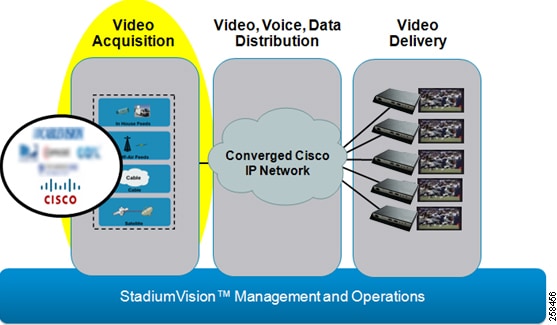 The headend is designed to acquire, process, and encode the video content used in the Cisco Vision Director solution. Figure 2 provides a simplified view of the video headend design, incorporating multiple types of video sources. In the headend, the video feed is:

Acquired and processed through the appropriate receivers and decrypters.

Once the multicast stream is on the network, the DMP can join it via IGMP and display it on the corresponding TV.

Encrypted video feeds from a cable or satellite provider.

Direct IP feeds from cable provider or from DirecTV receivers (as in North America).

Encoded external video sources. The DMP as an encoder can provide this function

Support for standards-based MPEG multiplexer and the native features it offers for changing video and audio feeds in the headend core.

A fixed channel lineup where each video channel is set to an IP Multicast address.

Baseline architecture, which provides a lower-cost entry point that can be modified at a later date to incorporate the redundancy and failover of the standard architecture.

The baseline architecture (Figure 3) provides an entry-level solution for cost- sensitive venues for North America and internationally. In this architecture:

There is no redundancy. However, the design allows this to be added at a later date.

No provisions are made for to accommodate legacy analog TV or RF plants.

The video distribution switch (VDS) should have dual 10 Gigabit connections to the core switch.

The standard architecture (Figure 3 and Figure 4), is the recommended architecture for Cisco Vision Director deployments. Beyond the baseline architecture, it incorporates redundancy for high availability, as well as support for additional features. 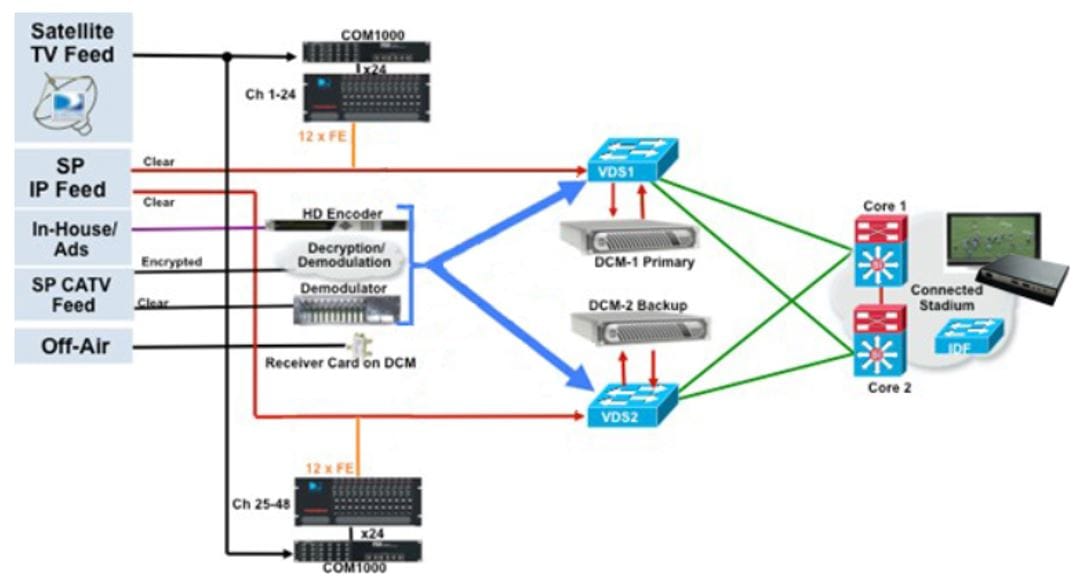 In the standard architecture:

Standards-based MPEG multiplexer and the video distribution switches (VDSs) are at the heart of the headend in the Cisco Vision Director solution. While other components of the headend may vary depending on the type of feed, these components remain relatively constant.

In the baseline head-end design, the core MPEG multiplexer and video distribution switches can be deployed in a non-redundant configuration.

For improved availability, in the standard headend design the MPEG Multiplexer and the video distribution switches are deployed in a redundant configuration, as previously shown in Figure 3.

The standards-based MPEG multiplexer, like Synamedia’s DCM D9902, takes video feeds from the various sources and sends the feeds to the video distribution switch with fixed IP Multicast addresses. The core MPEG Multiplexer can receive either:

H.262, H.264, or H.265 via direct IP feeds (unicast/multicast) from a video provider or from a local source. In this case, the MPEG Multiplexer serves as a demarcation point between the carrier and encoded feeds and the IP video distribution network.

Video sources encoded by Harmonic CP9000 encoder should not be passed through the MPEG Multiplexer since it adds 100ms of latency to the path of multicast video.

The video distribution switch provides the connection between the headend and the converged Cisco IP network. These switches support the advanced features (quality of service, IP Multicast, strict priority queuing) and the performance required for distribution of video streams over an IP network.

The choice of video distribution switch should be based on the required port density, as well as throughput requirements. While PoE is not required for standard operations, it may be needed for video troubleshooting and test points for DMPs located at the headend.

The network is setup for automatic failover of the primary video feed to redundant paths. As shown in Figure 5, if the video feed port on the MPEG Multiplexers Primary fails, the network will converge to the alternate active video feed emitted from the MPEG Multiplexers Secondary (backup). The link between video distribution switches is set with a relatively high EIGRP Delay (in the event of a core-video distribution switch link failure, to force an RPF interface change to the core router).

In the Cisco Vision design, an IP Multicast technique called Prioritycast is used for video multicast. This enables both MPEG Multiplexers to send out exact replicas of the channel lineup using the same IP multicast addresses. Prioritycast is an implementation strategy that provides load sharing and redundancy in Protocol Independent Multicast sparse mode (PIM-SM) networks.

With IGMP-V3 enabled, Source-Specific Multicast is the preferred method which does not require Rendezvous Points (RP) to be configured in the network. But where that option is not available, Prioritycast allows two or more rendezvous points (RPs) to share the load for source registration and the ability to act as hot backup routers for each other. Unlike Anycast, in which clients connect to the closest instance of redundant IP address, with Prioritycast, clients connect to the highest-priority instance of the redundant IP address. This allows for greater control of designating the preferred source.

The source is the MPEG Multiplexer and the router is the video distribution switch.

Each multicast channel is assigned the source IP address of the MPEG Multiplexer.

Each MPEG Multiplexer uses the same source IP address but with different prefixes (i.e., /29 and /30).

The primary servers and RPs are on the same video distribution switch using the /30 network mask.

In this design, the Reverse Path Forwarding (RPF) interfaces are determined using the installed unicast route of the longest advertised RP and sources prefixes. Thus, the rendezvous point tree (RPT) and shortest path tree (SPT)-switchover trees are on the same path.

Additional advantages of this design include:

One hop convergence for source redundancy due to network failure that results in the loss of the RP/Source prefixes.

Note: If there is a switch failure or MPEG Multiplexer failure, the secondary MPEG Multiplexer will take over in under a few seconds. However, there will be a momentary freeze-frame and glitch seen on the video screen at the DMP that will recover if the IP packet loss is not unusually high. The secondary stream source is also assumed to be healthy for this failover to be successful. 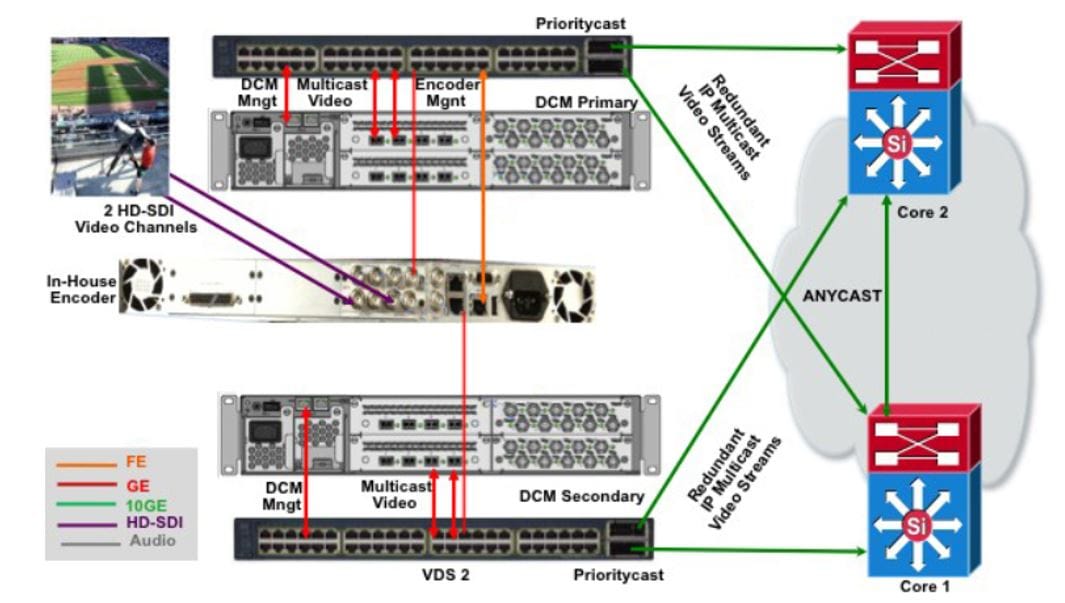 In this example (for RP implementations):

An MPEG-4 encoder for an in-house feed is shown.

The outputs from the encoder are connected to both MPEG Multiplexers.

Each MPEG Multiplexer has GbE connections to the corresponding video distribution switch.

Each video distribution switch has a 10 GbE connection to both core switches.

A 1:1 active/active Prioritycast model is used between the video distribution switches and the core MPEG Multiplexers.

All (*,G) pairs are sourced from the Primary source on MPEG Multiplexer1.

In the core switches, unicast route is used for route convergence towards the Prioritycast RP.

Note: The above is an example and in some encoding cases, like when using the low-latency Harmonic CP9000 encoder, the encoder will connect directly to the VDS switches.

Video streams can be encrypted in AES-128 format. Settings in the Cisco Vision Dynamic Signage Director allows to configure that as a global setting for the DMPs.

When a video feed is not encrypted, the decryption key passed to the DMPs will simply ignore it.

Video encoders are commonly used to take uncompressed source in-house video and convert it to the proper IPTV format and encapsulate in multicast frames.

The Harmonic CP9000 is a HD ultra-low latency streaming encoder from Harmonic. After configuration per Harmonic’s configuration guide, the output can be readily placed into the VDS as source multicast streams. Here are some of the highlights:

Low latency depending on network performance from 266 ms – 566 ms end to end.

Note: Output from this encoder is IPTV and should not be passed through a MPEG Multiplexer since this will unnecessarily add latency to the stream. This encoder features dual GbE interfaces which should be connected to the VDS switches directly.

The demarcation (demarc) switch is used with clear and encrypted IP feeds from a service provider. A few examples of the typical setup, including one used with DirecTV bundle will be shown here. Other configurations are possible.

On ingress, each demarcation switch is connected to the source via GbE going into a VLAN.

The service provider typically floods multicast to the demarc switches. If the SP does not provide the demarc, then the feeds will terminate at the VDS1/2 directly.

On egress, each demarcation switch sends an identical copy of the feed to each of the video distribution switches via GbE.

Typically, there is L2 on the demarc, it’s all VLAN/Trunk with IGMP snooping disabled on demarc for content VLANs.

If MPEG Multiplexers (shown as DCMs in Figure 6) are not used, then the provider’s L3 addressing must be known by the global/VRF routing table.

The Technicolor COM3000 can accommodate up to six COM51 blades in the COM400 chassis, with each blade able to tune up to 23 high-definition channels as well as tuning DirecTV UHD content.

Typically no demarc switch is used in this configuration unless provided by the service provider, so the COM400 will terminate directly to the VDS1/2. Here’s a link to the datasheet.

If MPEG Multiplexer (Figure 7 1 as DCM) is used, then this and any SP feeds should be terminated on the multiplexer via L2 VLAN without IGMP snooping.

Our recommendation is to use a MPEG Analyzer for comprehensive monitoring.

In addition, a HD-SDI TV that supports input, audio and closed caption can be used to monitor video feed.