Configure MAC-based VLAN Groups on a Switch through the CLI

Document ID:SMB5657
Configure MAC-based VLAN Groups on a Switch through the CLI

Note: To learn how to configure the VLAN settings on your switch through the web-based utility, click here. For CLI-based instructions, click here.

Networking devices on which multiple protocols are running cannot be grouped to a common VLAN. Non-standard devices are used to pass traffic between different VLANs in order to include the devices participating in a specific protocol. For this reason, you cannot take advantage of the many features of VLAN.

To configure VLAN groups on your switch, follow these guidelines:

1. Create the VLANs. To learn how to configure the VLAN settings on your switch through the web-based utility, click here. For CLI-based instructions, click here.

Note: If the interface does not belong to the VLAN, the MAC-based groups to VLAN configuration setting will not take effect.

4. (Optional) You can also configure the following:

Forwarding of packets based on the MAC addresses of the devices requires setting up groups of MAC addresses and then mapping these groups to VLANs. You can configure up to 256 MAC addresses, host or range, which can be mapped to one or many MAC-based VLAN groups.

This article provides instructions on how to configure MAC-based groups on a switch through the CLI.

Configure MAC-based VLAN Groups on the Switch through the CLI

Note: The commands may vary depending on the exact model of your switch. In this example, the SG350X switch is accessed through Telnet.

Step 3. In the Global Configuration mode, configure a MAC-based classification rule by entering the following:

You should now have configured the MAC-based VLAN groups on your switch through the CLI.

Step 2. In the Interface Configuration context, use the switchport mode command to configure the VLAN membership mode:

Step 3. (Optional) To return the port to the default VLAN, enter the following:

Step 4. To configure a MAC-based classification rule, enter the following:

Note: In this example, the interface is assigned to MAC-based group 1 which is mapped to VLAN 20.

Step 6. (Optional) To remove the classification rule from the port or range of ports, enter the following:

Note: In this example, interfaces that range from ge1/0/13 to 20 are assigned to MAC-based group 2 and assigned to VLAN 30.

Step 8. Enter the end command to go back to the Privileged EXEC mode:

You should now have mapped MAC-based VLAN groups to the VLANs on your switch through the CLI.

Step 1. To display the MAC addresses that belong to the defined MAC-based classification rules, enter the following in the Privileged EXEC mode: 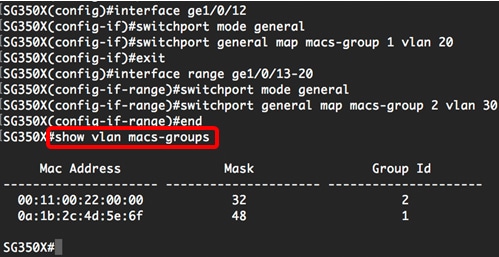 Step 2. (Optional) To display the classification rules of a specific port on the VLAN, enter the following:

Note: Each port mode has its own private configuration. The show interfaces switchport command displays all these configurations, but only the port mode configuration that corresponds to the current port mode displayed in Administrative Mode area is active. 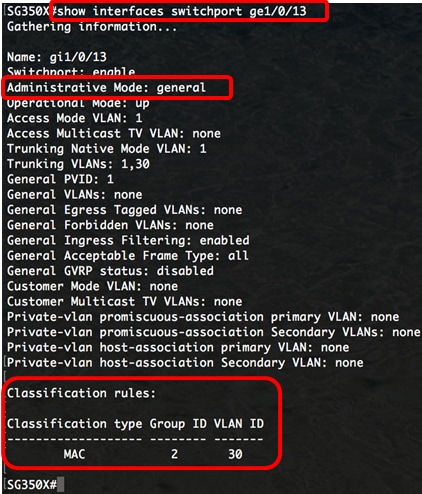 Note: In this example, the administrative and operational statuses of interface ge1/0/13 are displayed. The Classification rules table shows that the interface has been mapped to a MAC-based VLAN Group 2 and its traffic will be forwarded to VLAN 30.

Step 3. (Optional) In the Privileged EXEC mode of the switch, save the configured settings to the startup configuration file, by entering the following:

Step 4. (Optional) Press Y for Yes or N for No on your keyboard once the Overwrite file [startup-config]… prompt appears.

You should now have displayed the MAC-based VLAN group and port configuration settings on your switch.

Important: To proceed with configuring the VLAN group settings on your switch, follow the guidelines above.