To forward the packets properly, intermediate VLAN-aware devices that carry VLAN traffic along the path between end nodes must either be manually configured or must dynamically learn the VLANs and their port memberships from Generic VLAN Registration Protocol (GVRP).

This article provides instructions on how to use the Port to VLAN page in the web-based utility to display and configure the ports within a specific VLAN in a switch.

Configure VLAN Settings on the Switch

Step 1. Log in to the web-based utility and chooseVLAN Management > Port to VLAN. 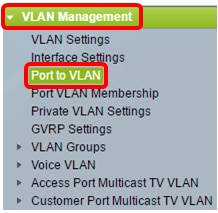 Note: In this example, VLAN20 is chosen.

Step 3. Choose an interface or Link Aggregation (LAG) from the Interface Type equals to drop-down list then click Go.

Note: In this example, Port of Unit 2 is chosen. 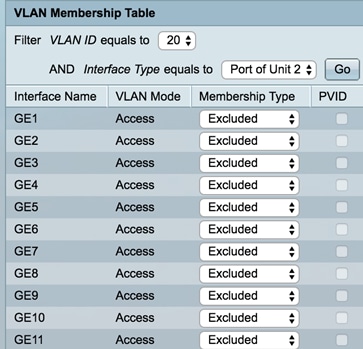 Note: In this example, GE1 interface is changed to Untagged.

Step 5. Scroll down to the bottom of the page then click Apply. The interface is assigned to the VLAN and saved in running configuration file.

Step 6. (Optional) Repeat Steps 2 to 5 to configure port membership of another VLAN by choosing another VLAN ID.

Step 7. (Optional) Click Save to save settings to the startup configuration file. 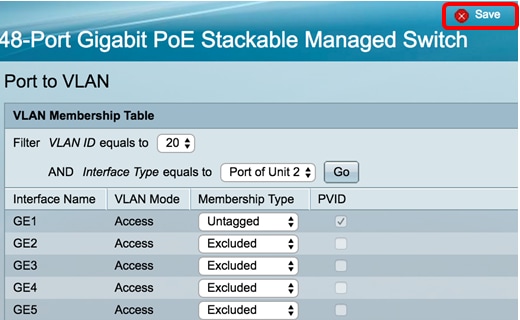 You should now have configured the ports within a specific VLAN in a switch.