This article provides instructions on how to configure subnet-based groups on a switch. 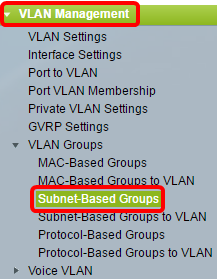 Step 4. Enter the IP address to be assigned to a VLAN group in the IP Address field. This is where the subgroup is based.

Step 5. Enter the prefix mask that defines the subnet in the Prefix Max field.

You should now have added a subnet-based VLAN group on your switch.

Step 2. In the Subnet-Based Group Table, check the box next to the subnet-based VLAN group you would like to delete.

Step 4. (Optional) Click Save to save settings to the startup configuration file.

The subnet-based VLAN group should now have been deleted from your switch.

You should now have configured subnet-based VLAN groups on your switch. To learn how to map subnet-based groups to VLAN, click here for instructions.