This document describes how to configure backbone fast. Backbone fast is a Cisco proprietary feature that, once enabled on all switches of a bridge network, can save a switch up to 20 seconds (max_age) when it recovers from an indirect link failure. After a quick review of some Spanning-Tree Protocol (STP) basics, you can see the exact failure scenario to which backbone fast applies and how to configure it for Catalyst switches that run both CatOS and Cisco IOS® software.

BPDUs and How to Compare Them

Bridge Protocol Data Units (BPDUs) can be strictly classified by the fields they carry. Among these fields are the root bridge ID, path cost to the root, and sender bridge ID. A BPDU is considered better than another BDPU for these reasons:

There are other variables that then can act as a tie-breaker. However, the better a BPDU, the better the access to the best root bridge.

How STP Recovers From an Indirect Link Failure

This illustrates how STP behaves when it has to recalculate after an indirect link failure, that is, when a bridge has to change the status of some of its ports because of a failure on a link that is not directly attached to it. 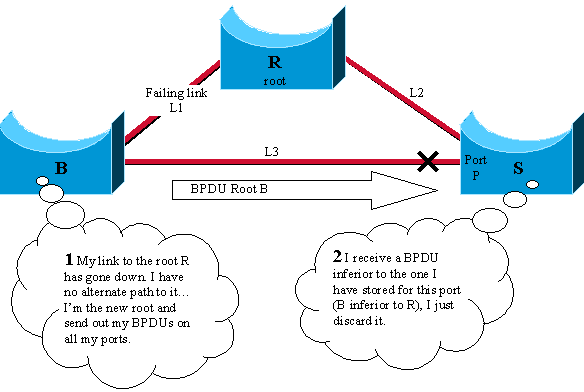 Consider this diagram, which involves three switches R, B, and S in a fully meshed topology. Assume that R is the root bridge and B is the backup root bridge. S blocks its port P and B is the designated bridge for link L3.

It took the max_age value (20 seconds) plus twice the fw_delay value (2x15 seconds) to recover from this indirect link failure. This is 50 seconds with the default parameters. The backbone fast feature proposes to save max_age (20 seconds). In order to do this, it ages out immediately after the port receive inferior BPDUs.

With the previous example, STP invalidates information that becomes wrong because of an indirect link failure. In order to do this, it passively waits for max_age. In order to get rid of this max_age delay, backbone fast introduces two enhancements:

If an inferior BPDU is received on a port from our designated bridge, then this bridge has lost the root and starts to advertise a root with a higher bridge ID, a worse root than ours.

The usual behavior in regards to the Institute of Electrical and Electronics Engineers (IEEE) specifications is to simply ignore any inferior BPDUs. Backbone fast uses them because as soon as one is received, it is certain that a failure occurred on the path to the root and that you must age out at least one port.

Note: An indirect link failure can happen without any inferior BPDU generation in the network. Simply add a hub in the previous diagram:

The link failure occurs between the root bridge R and the hub. B does not detect that the link goes down and waits max_age before it claims to be the new root. Remember that the mechanism only works if a bridge detects a direct link failure.

Only keep track of inferior BPDUs sent by the designated bridge. Since this is the BPDU that is stored on the port. If, for instance, a newly inserted bridge starts to send inferior BPDU, it does not start the backbone fast feature.

When an inferior BPDU is detected on a non-designated port, the second phase of backbone fast is triggered. Instead of passively waiting max_age to age out ports that can be affected by the failure, a proactive way to test them immediately is introduced by means of the RLQ PDU. The RLQ is used to achieve a kind of ping for the root on a non-designated port and allowed to quickly confirm if the BPDU stored on a port is still valid or needs to be discarded.

On the receipt of a RLQ response on a port, if the answer is negative, the port lost connection to the root and you can age out its BPDU. Furthermore, if all other non-designated ports already received a negative answer, the whole bridge loses the root and can start the STP calculation from scratch.

If the answer confirms you can still access the root bridge via this port, you can immediately age out the port on which we initially received the inferior BPDU.

In this example, ports A, B, D, and E are non-designated ports for switch S. A is the root port and the others are blocking. When E receives an inferior BPDU (1), backbone fast kicks in to speed up STP recalculation.

Send out an RLQ request, which looks for root R on all non-designated ports but E (2). The replies specify which root is accessible via these ports. The RLQ response that D receives specifies that D lost its path to the root R. Age its BPDU out immediately (3). Ports A and B receive confirmation that they still have a path to R (4). So, as the switch S still has connectivity to the root, immediately age out port E and carry on with regular STP rules (5). 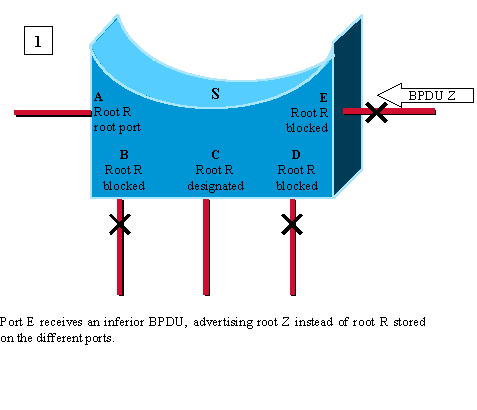 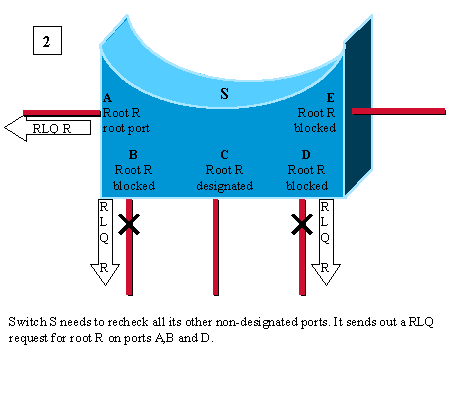 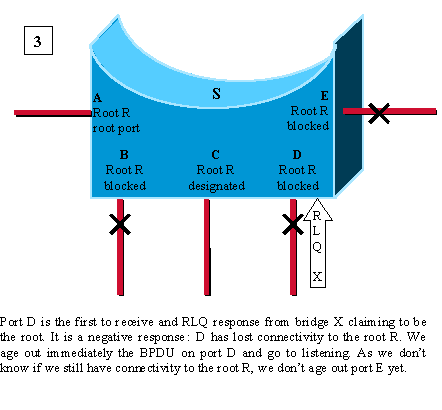 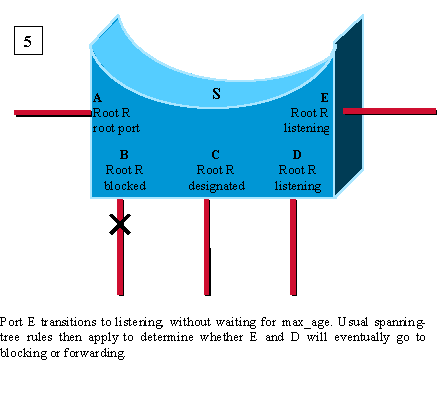 In a case where the switch received only responses with a root different from R, consider the root as lost and restarted STP calculation from scratch immediately. Note that this case also occurs when the only non-designated (and non self-looped) port on the bridge is the root port and you receive an inferior BPDU on this port.

The two forms of RLQs are RLQ requests and RLQ responses.

The RLQ request is sent out on a port where you usually receive BPDUs, in order to check that you still have connectivity to the root through this port. Specify in the request which bridge is your root and the RLQ response eventually comes back with a root bridge that can be accessed through this port. If the two roots are the same, connectivity is still alive, else, it is lost.

A bridge that receives a RLQ request immediately answers if it knows it has lost connection to the root queried because it has a root bridge different to the one specified in the RLQ query, and if it is the root.

If this is not the case, then, it forwards the query toward the root through its root port.

RLQ responses are flooded on designated ports. The sender of the RLQ request puts its bridge ID in the PDU. This is to ensure that when it receives back a reply to its own query, it does not flood the response on its designated ports.

The RLQ PDU has the same packet structure as a normal STP BPDU. The only difference is that two different Cisco-specific SNAP addresses are used: one for the request and one for the reply.

This the standard BPDU format:

The PDU field is:

The message type used in the PDU is also different from the standard BPDU.

The only fields used are the root ID and the sender bridge ID.

This Cisco-specific feature needs to be configured on all switches in the network in order to process these PDUs.

This scenario is based on the first example, but, this time with backbone fast enabled on the three switches. 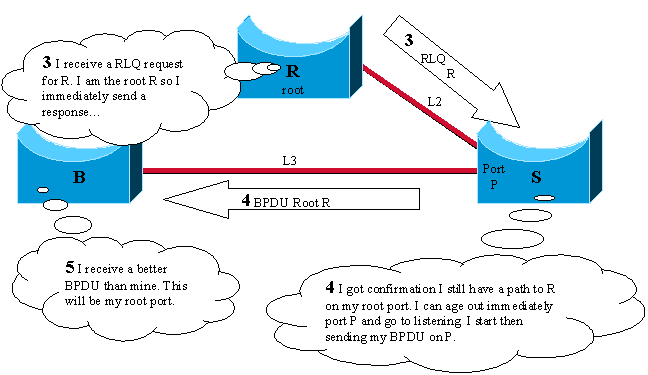 Backbone fast is not supported on Catalyst 2900XL and 3500XL switches. In general, you need to enable backbone fast if the switch domain contains these switches in addition to other supporting Catalyst switches. When you implement backbone fast in environments with XL switches, under strict topologies, you can enable the feature where the XL switch is the last switch in line and is only connected to the core at two places. Do not implement this feature if the architecture of the XL switches is in daisy-chain fashion.

You do not need to configure backbone fast with RSTP or IEEE 802.1w because the mechanism is natively included and automatically enabled in RSTP. For more information on RSTP or IEEE 802.1w, refer to Spanning Tree from PVST+ to Rapid-PVST Migration Configuration Example.

For Catalyst 4000, 5000, and 6000 series switches that run CatOS, use these commands in order to enable backbone fast globally for all ports and to verify the configuration.

For Catalyst switches that run with Cisco IOS software, use these commands in order to enable backbone fast globally for all interfaces.

In order to verify that backbone fast is enabled and to show statistics: