Field Notice: FN - 63902 - ASR 903 - Some Fan Filters Inside the Fan Tray Might Not Function Properly Due to Wrong Orientation - Workaround Provided

If the fan filter (ASR903-FAN-F) is installed with the wrong orientation inside the fan tray (ASR903-FAN-E), then the filter needs to be reinserted correctly per the procedure detailed in the Workaround/Solution section.

It was noticed that if the fan filter is installed with wrong orientation (as described in the How to Identify Affected Products section), the fan filter can shear the insulation on the hot wire (red wire) and expose the conductor when it is pulled out. This is caused by the straight part of the metal sheet on the filter that faces the wire, when the filter is installed in the wrong direction.

When the filter is reinserted, there is a chance that the exposed wire in the fan tray might short when it comes in contact with the metal frame of the filter. This will shut down the fan tray, but it will not cause a safety hazard.

In order to fix the issue, remove the fan filter that was installed with the wrong orientation and reinsert it in the correct orientation (with the metal frame of the filter facing the fans) per the procedure detailed in the Workaround/Solution section.

When you remove/reinsert the fan filter, the fan tray might shut down if it has caused a short (12V to Ground short) when it comes in contact with the metal frame of the fan filter. Also, when the filter is removed, the customer could notice that the sheath on the wire has been peeled off which exposes the conductor in the fan tray.

Fan filters need to be correctly oriented inside the fan tray. Use the Fan Filter Removal and Reinsertion Procedure in order to rectify the issue.

How To Identify Affected Products

If the box shows "Affected", use this procedure in order to complete a visual inspection of the fan filter (whether it is in the right or wrong orientation) before before you begin the reinsertion procedure as detailed in the Workaround/Solution section.

Note: It is imperative that you complete the visual inspection and SEE whether the filter is in the correct orientation. You should begin the Fan Filter Removal and Reinsertion Procedure ONLY if you have identified a fault with the orientation. 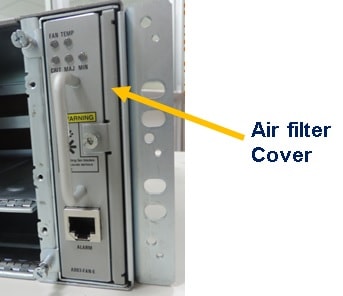 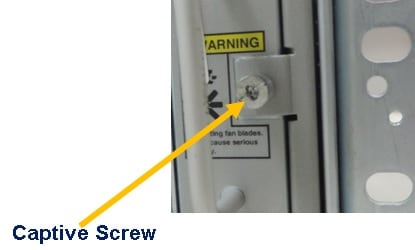 Fan Filter in the Correct Orientation

If the pull-tab (black rubber part that projects out of the filter) touches the fan tray as indicated in this image, the filter is installed in the correct orientation. Reassemble the filter cover. 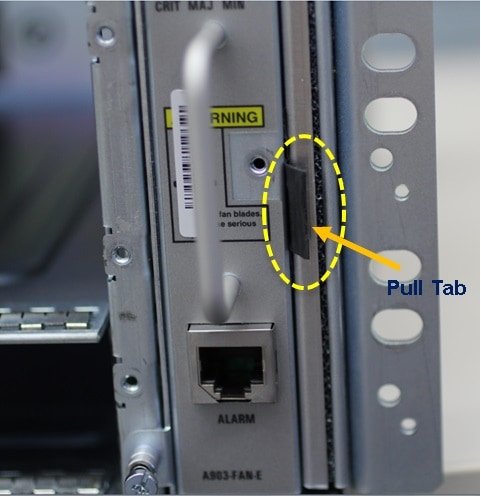 If the pull-tab touches the wall of the chassis on the right as shown in this image, the installation is incorrect. Follow the Fan Filter Removal and Reinsertion Procedure in order to correct the filter orientation. 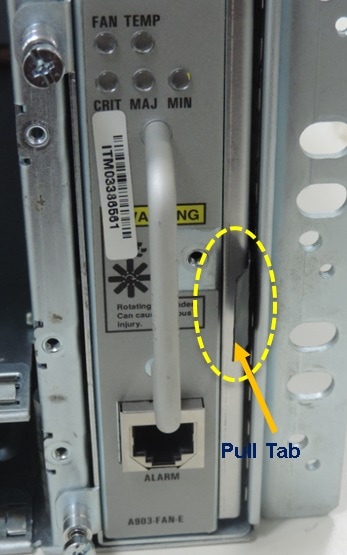 If the pull-tab is not seen from the outside as shown in this image, the installation is incorrect. Follow the Fan Filter Removal and Reinsertion Procedure in order to correct the filter orientation. 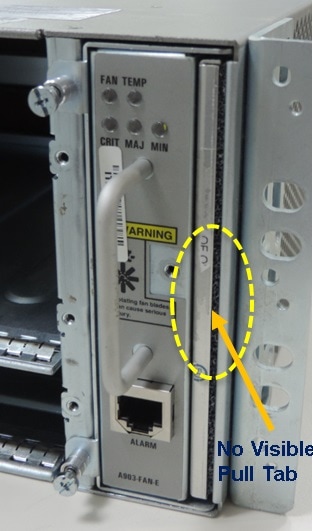