Cisco IOS® XE is the network operating system for the enterprise. It runs on switches such as the Cisco® Catalyst® 9000 family; routers such as the Cisco ASR 1000 Series, Cloud Services Router (CSR) 1000v, and 1000 and 4000 Series Integrated Services Routers (ISRs); and the Cisco Catalyst 9800 Series Wireless Controllers, as well as a few other hardware and virtual platforms both on-premises and in the public cloud. Since Cisco IOS XE Release 16.6, there has been support for Model-Driven Telemetry (MDT), which provides network operators with additional options for getting information from their network using the NETCONF interface. The introduction of Google Remote Procedure Call (gRPC) based MDT to Release 16.10 now provides an additional interface for telemetry publication, backed by YANG data models. Unlike the original NETCONF telemetry interface, which is “dial in” and session based, the gRPC interface is “dial out” and is based on configuration within the Cisco IOS XE device.

Traditionally, Simple Network Management Protocol (SNMP) has been highly successful for monitoring enterprise networks, but it has limitations: unreliable transport, inconsistent encoding between versions, and limited filtering and data retrieval options, as well as the impact to the CPU and memory of the running device when multiple network monitoring solutions poll the device simultaneously. Model-driven telemetry with gRPC addresses many of the shortfalls of the legacy monitoring capabilities and provides an additional interface that telemetry is now available to be published from. Yes, this is a push-based feature. No longer do you need to poll the device and ask for operational data or the current configuration state. Now you just decide what data is needed, how often, and where to send it to. Once the configuration is in place, the Cisco IOS XE device happily publishes the telemetry data to the third-party collectors, your monitoring tools, big data search and visualization engines such as Splunk and Elastic, or even to a simple text file – what you do with the data is totally configurable. In the example described here we use Telegraf plus InfluxDB plus Grafana to receive, store, and visualize the data.

YANG data models (Yet Another Next Generation!) are at the heart of model-driven telemetry. These human-readable text-based models define the data that is available, not just for telemetry publication but also for programmatic configuration. These data models reside within the Cisco IOS XE device and can easily be downloaded when using tools such as YANG Explorer. All of the models are also published on the YangModels GitHub page at https://github.com/YangModels/yang/tree/master/vendor/cisco/xe, which makes them easy to access and analyze.

One common use case is to monitor the interface state, errors and counters, and CPU and memory utilization of the device. Let’s understand where and how we can get this data from our Cisco Catalyst 9300 Series switch running Cisco IOS XE 16.10.

The YANG Explorer tool is available on the CiscoDevNet GitHub page at https://github.com/CiscoDevNet/yang-explorer. It can download the YANG models directly from the Cisco IOS XE device over the programmatic interfaces (NETCONF, RETCONF, and gRPC Network Management Interface [gNMI]) and quickly show which data is available and from which model.

The screen shot below from the YANG Explorer shows that we have already downloaded and loaded the Cisco-IOS-XE-process-cpu-oper.yang model and have begun to explore it. It shows that the 1-minute, 5-minute, and 5-second “Busy CPU-Utilization” is available as a percentage, as well as the Interrupt 5-second (five-second-intr) metric. It also shows some metadata about the model that includes the XPath, Prefix, Namespace, and a description with some other details. 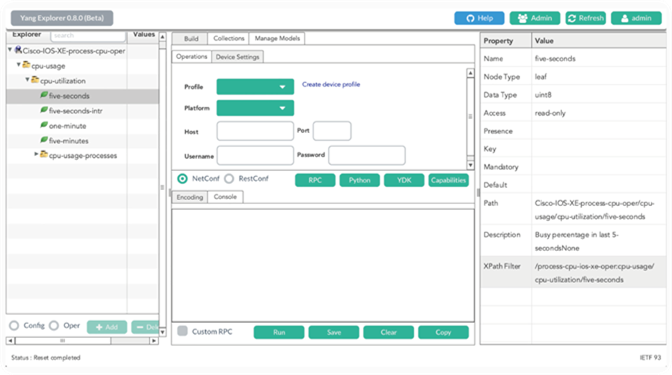 Now that we know which YANG data model contains the needed information, let’s enable sending this telemetry from the device. It is possible to configure and verify telemetry subscriptions from the traditional Cisco IOS Command-Line Interface (CLI) as well as through the NETCONF, RESTCONF, and gNMI programmatic interfaces using YANG. In the CLI, the show commands are available with the “show telemetry ietf” set of commands, and their syntax is similar to the “telemetry ietf subscriptions” commands when in configure mode. When YANG is used, the Cisco-IOS-XE-mdt-cfg.yang and Cisco-IOS-XE-mdt-oper.yang YANG models are available for both configuration and operational datasets.

●     Enables a telemetry configuration with an identification number of 501

Software is required to receive and process the telemetry data, and there are many options available to accomplish this. Splunk, LogRhythm, and Elasticsearch are off-the-shelf solutions, while custom and open-source options written with Python or Go are also available. One option is to use the open source software stack that allows easy reception, decoding, and processing of the “kvgbp” telemetry, which is referred to as the TIG stack. TIG represents three separate software components: Telegraf, which receives the telemetry data, InfluxDB, which stores it; and Grafana, which is responsible for visualizations and alerting.

Telegraf has the “cisco_telemetry_mdt” input plug-in that receives and decodes the gRPC messages that the Cisco IOS XE device sends. It also has an output plug-in that can send this data into the InfluxDB datastore, where it is stored. The configuration for Telegraf is simple and static because once it’s set up it rarely needs to be reconfigured or modified. Simply define a few global parameters, the input, and the output, and then start the Telegraf service to start receiving telemetry from the Cisco IOS XE device. In this example we configure the gRPC input listener on port 57000 – this is the port that Cisco IOS XE will publish telemetry to. We have also configured where to send the data to once it is received by Telegraf: InfluxDB running on the localhost, port 8086, as well as the database, username, and password to use for the datastore.

InfluxDB is used to store the telemetry data that is received from Telegraf. It can hold many “databases,” or a single database can be used for all telemetry data. For simplicity we are using one database in our example, but in production deployments multiple smaller databases may be beneficial for speed and search optimization.

Grafana is the visualization engine that is used to display the telemetry data. It calls into InfluxDB to access the data that is stored there, which is the same data that Telegraf received from Cisco IOS XE. In this example there are three unique queries for each of the CPU metrics: 5 minute, 1 minute, and 5 seconds, and those are shown in the graph. We can see that the 5-second CPU average in blue peaks at around 50% utilization; meanwhile the slower averages of 1 minute and 5 minutes increase only to around 10%.

Refer to the official guides in order to set up, configure, and operate Telegraf, InfluxDB, and Grafana in your environment as needed. We understand why moving away from SNMP is important, and now that additional streaming telemetry protocols and interfaces are available in Cisco IOS XE we can start transitioning toward their use. The open source Telegraf, InfluxDB, and Grafana software stack can easily be set up to receive, store, and visualize this data from the network. A DevNet Learning Lab has been created that has the Cisco Catalyst 9300 Series switch configured to send gRPC telemetry into the TIG stack on an Ubuntu Linux host. Reserve the sandbox to get hands-on experience with this feature, available from https://developer.cisco.com/learning/modules/iosxe_telemetry. There are several Cisco blogs about leveraging the new model-driven telemetry capabilities; these can be found at https://blogs.cisco.com/developer/its-time-to-move-away-from-snmp-and-cli-and-use-model-driven-telemetry and https://blogs.cisco.com/developer/getting-started-with-model-driven-telemetry. Finally, the Cisco IOS XE Programmability Configuration Guide has detailed information about MDT. It is linked from the Cisco IOS XE site at https://developer.cisco.com/site/ios-xe/.