This chapter describes the Cisco Aironet Wireless LAN Adapters, also referred to as client adapters, and illustrates their role in a wireless network.

The following topics are covered in this section:

The Cisco Aironet Wireless LAN Adapters, also referred to as client adapters, are radio modules that provide transparent wireless data communications between fixed, portable, or mobile devices and other wireless devices or a wired network infrastructure.

The primary function of the client adapters is to transfer data packets transparently through the wireless infrastructure. The adapters operate similarly to a standard network product except that the cable is replaced with a radio connection. No special wireless networking functions are required, and all existing applications that operate over a network will operate using the adapters.

This document covers the following types of client adapters:

Refer to the "Radio Antenna" section for antenna differences between these adapters.

client adapter—Refers to all four types of adapters

The Cisco Aironet 340 and 350 series PC, LM, and PCI cards are IEEE 802.11b-compliant client adapters. They contain a direct-sequence spread spectrum (DSSS) radio that operates in the 2.4-GHz Industrial Scientific Medical (ISM) license-free band. The 340 series 30-milliwatt (mW) radio and the 350 series 100-mW radio transmit data over a half-duplex radio channel operating at up to 11 Mbps. These cards interoperate with other IEEE 802.11b-compliant client devices in ad hoc (or peer-to-peer) mode or with Cisco Aironet 340, 350, and 1200 Series Access Points (with a 2.4-GHz radio) and other IEEE 802.11b-compliant infrastructure devices in infrastructure mode. They are approved for indoor and outdoor use.

PCI cards are shipped with a 2-dBi dipole antenna that attaches to the card's antenna connector. However, other types of antennas may be used. PCI cards can be operated through the primary (or right) antenna port only.

Refer to the Antenna Mode (Transmit and Receive) parameters in Table 6-6 for information about setting the client adapter's antenna mode.

The client adapters have two LEDs that glow or blink to indicate the status of the adapter or to convey error messages. Refer to the "Interpreting the Indicator LEDs" section for an interpretation of all LED codes.

This section describes and illustrates the following common network configurations:

For information about setting the client adapter's network mode, refer to "Advanced Configuration."

An ad hoc (or peer-to-peer) wireless LAN (see Figure 1-1) is the simplest wireless LAN configuration. In a wireless LAN using an ad hoc network configuration, all devices equipped with a client adapter can be linked together and communicate directly with each other. 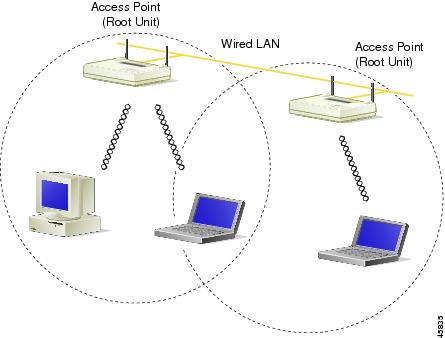