This chapter explains how to install the Cisco IP Phone 7960G/7940G on the desktop or how to mount it to the wall. It provides information on the following:

Placing the Phone on the Desktop

Installing the Phone on the Wall

Using the Phone with a Cisco Catalyst Switch

Connecting the Phone to Power

Placing the Phone on the Desktop

You can place the phone on the desktop or on the wall. The Cisco IP phone includes an adjustable footstand. When placing the phone on a desktop surface, you can adjust the tilt height to several different angles in 7.5-degree increments from flat to 60 degrees.

Installing the Phone on the Wall

Mounting the Cisco IP Phone7960G/7940G on the wall requires some tools and equipment that are not provided. The tools and parts required for a typical Cisco IP Phone installation are a screwdriver and screws to secure the phone to the wall.

Push in the footstand adjustment knob.

Adjust the footstand so that it is flat against the back of the phone, as shown in Figure 2-1. 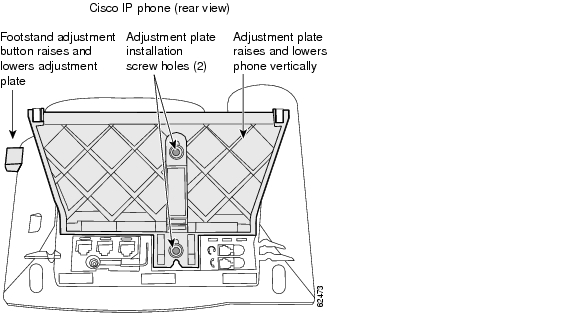 Remove the handset from the earpiece rest.

Locate the tab (handset wall hook) at the base of the earpiece rest.

Slide this tab out, rotate it 180 degrees, and reinsert it.

Place the handset on the earpiece rest.

Insert two screws into a wall stud, matching them to the two screw holes on the back of the footstand. The screw holes fit standard phone jack mounts.

Hang the phone on the wall.

Consider use of an uninterruptible power supply (UPS). Without one, when you use either a local transformer or inline power on the LAN, the phone is inoperable during a power outage. This affects your ability to make emergency calls: 911 in USA and Canada, 999 in the UK, and 112 in mainland Europe.

Use of a headset does not require an amplifier. However, it does require a coil cord to connect the headset to the headset port. For information on ordering compatible headsets and coil cords, refer to http://cisco.getheadsets.com or http://vxicorp.com/cisco.

Using the Phone with a Cisco Catalyst Switch

The current VLANs might be configured on an IP subnet basis, and additional IP addresses might not be available to assign the phone to the same subnet as other devices (PC) connected to the same port.

Data traffic that is present on the VLAN that supports phones might reduce the quality of VoIP traffic.

Data traffic to and from the PC connected to the switch through the access port of the Cisco IP Phone 7960G/7940G (native VLAN).

Isolating the phones on a separate, auxiliary VLAN increases the quality of the voice traffic and allows a large number of phones to be added to an existing network where there are not enough IP addresses.

For more information, refer to the documentation included with the Cisco Catalyst switch.

Connecting the Phone to Power

Read the installation instructions before you connect the system to its power source.

When you connect the phone to power, the phone automatically begins startup and initialization. Use this section to determine how you will power your phones. Do not connect the phones to power, though, until you address the prerequisites and follow the configuration instructions in "Initializing Cisco SIP IP Phones."

You can connect the Cisco IP phone to the following power sources:

WS-X4608-2PSU and WS-X4608—External -48VDC power shelf common equipment for the Cisco Catalyst 4006 with two AC-to-DC power supply units (PSUs) and one empty bay for redundant option, and the 110-V 15-A AC-to-48VDC PSU redundant option for the power shelf.